Home Sports ‘This Is Why Juventus Bought Me’ – Ronaldo Boasts
Sports

‘This Is Why Juventus Bought Me’ – Ronaldo Boasts 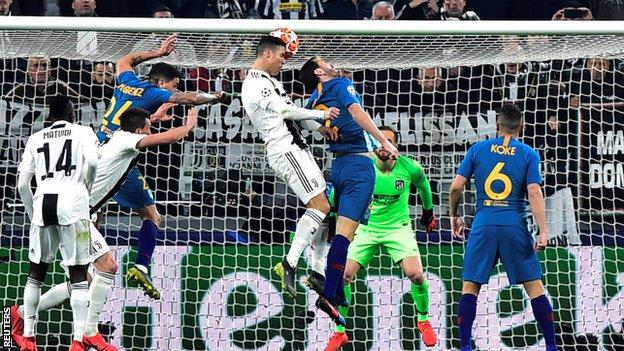 Cristiano Ronaldo was signed to win Juventus the Champions League – and he might yet do just that.

The Portuguese produced his latest masterclass in Europe’s elite competition to bring the Italian side back from the brink of a last-16 exit against Atletico Madrid and book their place in the quarter-finals.

Trailing 2-0 from the first leg in Spain, Ronaldo was facing up to the prospect of failing to reach at least the semi-finals for the first time since 2010 – and only the second time in 12 seasons.

He has scored eight Champions League hat-tricks, the joint-most in the competition alongside Messi.

It is almost four years since a team featuring Ronaldo was knocked out of the Champions League and he could still win the competition for a fourth consecutive season.

Ronaldo joined Juventus from Real Madrid last summer in a £99.2m deal, becoming one of the most expensive players of all time in the process.

His remit was, in large part, to help the Turin club win the Champions League.

“This was why Juventus brought me here, to help do things that they have never done before,” said Ronaldo, who has now scored 18 goals in his past 14 Champions League knockout appearances and has been directly involved in 76 goals in 77 knockout matches (62 goals, 14 assists).

“It was always going to be a special night and it was – not only for the goals but for the team.

“This is the mentality you need to win in the Champions League. We enjoyed a magical night. Atletico were a difficult team but we were strong too. We will see what will happen.”

‘This Is Why Juventus Bought Me’ – Ronaldo Boasts was last modified: March 13th, 2019 by Damilare Salami