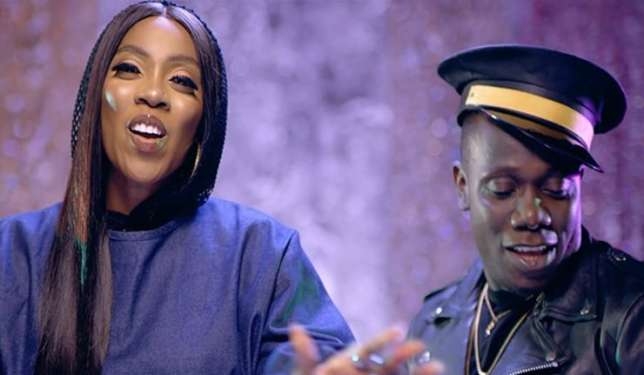 Tiwa Savage in a recent interview says that her record with Duncan Mighty, ‘Lova Lova’ is the biggest song of her career yet.

Tiwa Savage calls her collaboration with Duncan Mighty, ‘Lova Lova, the biggest song of her illustrious career yet.

The singer who on Friday, August 24, headlined her first sold out , is also set to release her third studio album before the end of the year.

In an interview with Awazi of Soundcity FM, Tiwa touches on a number of issues concerning her music, collaborations, feminism and personal life.

Speaking on her latest single ‘Lova Lova’ with Duncan Mighty

‘Lova Lova’ is one of the biggest records of 2018. The song which features the revived Duncan Mighty became an instant hit on the streets and Tiwa talks about the process of recording the song.

”It was just one of those usual studio sessions, I worked with Ceeza and Spellz on it and instantly I knew it was a beautiful record…

Actually we have had this record since January, it was right after I dropped Vibe and it seemed like the next song to drop.

Duncan Mighty and myself, we’ve spoken for a long time about working together and so he was in Lagos and I invited him out to the studio, played him a couple of records and that one in particular and he was like, I love this record, and literally in 10, 15 minutes, he wrote his verse.”

On ‘Lova Lova’ being the biggest song of her career

Responding to a message she shared on her Instagram page, which had the caption that ‘she had recorded the biggest song of her career’, Tiwa admits that is how she feels about ‘Lova Lova’.

She speaks on the international collaborations that she is working on

”I have a record with Chris Martin from Coldplay… I do have a record also with Kranium… I believe it is going to be on his album which is coming out in October.”

On her relationship with Yemi Alade

Earlier in June, Tiwa Savage’s name was mentioned in a conversation between on Air Personality,Misis Molu and singer Yemi Alade which generated controversy on social media, but Tiwa says all is well between her and fellow singer, Yemi.

”There is no bad vibe actually, everytime we see each other, it’s just the mutual respect that we have for each other.

Definitely, I am here for a reason, I think I have worked hard enough… I take every criticism the right way… I definitely don’t think she [Misi] meant it a bad way,” she concluded.

Tiwa Savage just before her concert in the UK had stated that she and frequent collaborator, Wizkid have a number of new songs together and her next single will feature English rapper/singer, Stefflon Don.