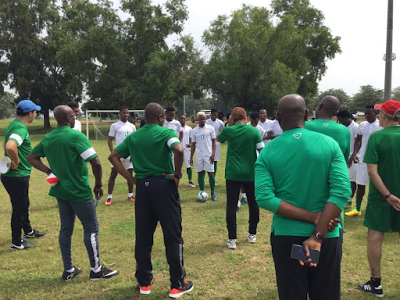 Nigeria secured a 2-0 win over their counterparts from Togo in the second leg of their African Nations Championships (Chan) qualifiers on Saturday at the Agege Stadium, Lagos.

Sikiru Alimi got the two goals for the hosts but his effort was still not enough as Nigeria failed in their quest for qualification, losing to the Sparrow Hawks 4-3 on aggregate.

Having lost 4-1 in the first leg in Lome, Coach Imama Amapakabo made wholesale changes to his team, inviting eight new players to beef-up his team.

Though Theophilus Afelokahai retained his position in goal, most of the new invitees were thrown into the starting line up.

Nigeria started the game at a fast pace and inside eight minutes they were a goal up through Alimi.

While it was expected that the hosts will build on their blistering start, Nigeria failed to convert their numerous chances; heading to the break with just the slim advantage.

After sustained pressure, the Sparrow Hawks who adopted a defensive approach all through were finally breached again in the 72nd minute and it was Alimi that scored his second of the game.

With a lot of stoppages and time-wasting by the visitors, there were 10 minutes added time but the Hawks still held on to progress on a 4-3 aggregate scoreline.

Nigeria finished as runners-up in the last edition of Chan in Morocco and were hoping they could improve on that in Cameroon but they have failed to even qualify.