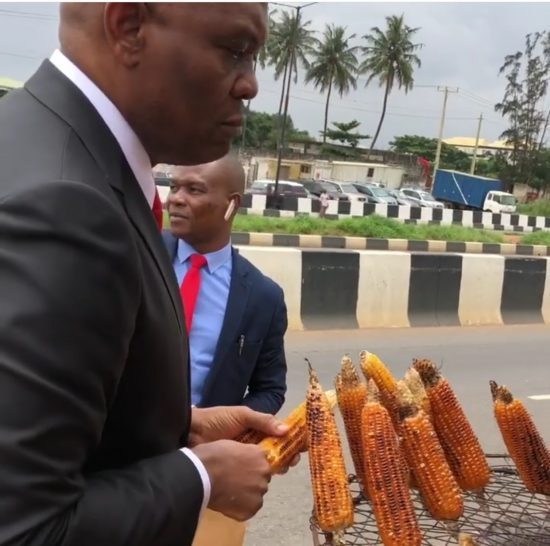 Tony Elumelu, Nigerian banker and chairman of pan-African UBA and Tony Elumelu Foundation has set Instagram agog with a post that shows him sampling and buying roasted corn on the Lagos Expressway.

The amiable businessman and philanthropist set the tone of reactions when he wrote: Jollof is nice but some days we sample roasted corn along the Lagos express. Some cravings die hard”.

His gesture appears more remarkable because a day earlier he had been a guest of President Macky Sall of Senegal and shared jollof rice with him at the presidential palace.

And now in Lagos, the rich banker is behaving like the common Nigerian.

His gesture has evoked over 139,887 like by noon on Friday, arguably the highest number of reactions by his close to 400,000 followers.

Among the followers who joined the over 5,000 commenters were Wizkidayo and Daddy Showkey.

Wizkidayo simply wrote: ‘mentor’ with a love meme attached to the message.

Many commenters praised him for his simplicity.

READ ALSO: MAN WHO LOSES WIFE IN BET WATCHES AS FRIENDS GANG-RAPE HER

Naira Sells At N359 To Dollar At Parallel Market