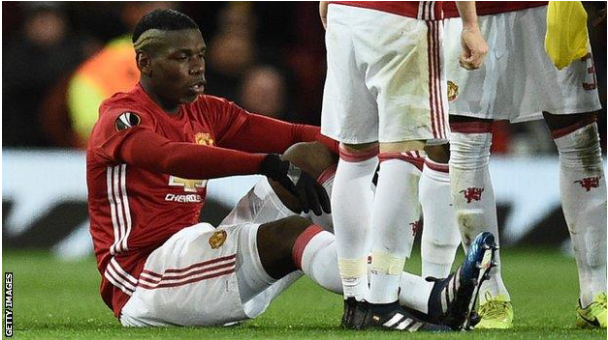 Manchester United beat Rostov 1-0, but it was a victory that came at a cost for Mourinho as he lost Pogba and Daley Blind to injury.
Midfielder Pogba has come in for criticism recently, but Mourinho clearly sees the £89m midfielder as a crucial part of his side.
The France international was making his 41st appearance of the season for United but has rarely dominated a game, and he was largely a peripheral figure here before pulling up with an apparent hamstring injury early in the second half. He will miss Sunday’s Premier League game at Middlesbrough.
Mourinho, speaking to BT Sport said “We were afraid of extra time. It was a difficult game.
“We have lots of enemies. Normally the enemies should be Rostov but we have a lot of enemies. It’s difficult to play Monday with 10 men, it’s difficult to play now, it’s difficult to play 12 o’clock on Sunday. We have a lot of enemies.
“A lot of people might say we should have scored more goals. But a lot of things are going against us. The boys are amazing boys. We will probably lose the game on Sunday. Fatigue has a price.
“I will remember forever when I spoke to the Uefa delegate in Rostov. He told me if any of our players gets injured, the insurance paid. Whoever decided the Monday and Sunday games probably thinks the same way.”
Mourinho was then forced into another change, and a reshuffle at the back, when defender Blind went off midway through the half with suspected concussion.
With a congested fixture list caused by United battling for Europa League success and a place in the Premier League top four, Mourinho will hope neither player is out for an extended period.