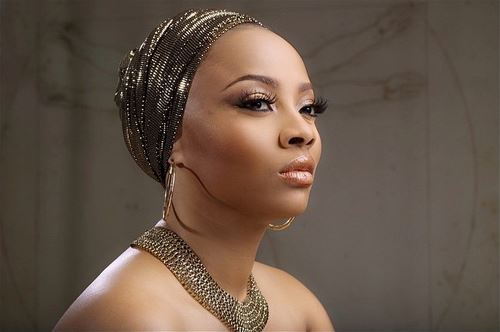 Radio gal, Toke Makinwa is madly in Love. And this is authoritative. We can tell you with certainity that the popular OAP has fallen in love again a few years after dumping her ex-Husband, Maje Ayinda. She has found love in a Nigerian American based businessman, Seyi Kuye. One amazing thing about Toke`s new beau is that he looks so much like her ex-husband, Maje Ayida.

Seyi Kuye is not just tall and lanky like Maje. His  complexion and physique have a striking resemblance to that of Maje. To crown it all, Seyi is also bald as Maje.  Perhaps, the only difference in the duo  is that, Seyi wears glasses and Maje doesn’t. The news about Toke`s new lover first broke on her birthday 2 month ago when her friends held a surprise birthday party for her and Seyi Kuye was part of the whole plan. Many people believed that she was only trying to seek  attention, but those who could read between the lines saw that this fair-skinned OAP has found her missing rib again.

The video of the surprised birthday gig video  was posted by some of her friends on social media sometimes last November before she launched her new book. And it went viral.

In the video, Toke was ecstatic when she saw Seyi as her friends began to sing Happy birthday song to launch her into the mood. She appreciated all her friends for their efforts of giving her a special day and pulling off a  big surprise. She later wrote on her social media handle: “Thank you all for the love. This is my best birthday yet. God bless you all for your prayers, the kind words, and all the heartfelt wishes. God is real, I have seen Him show up for me, time and  again. He has turned my life  round. To all my friends who pulled off the surprise dinner last night, I’ll get you all back. I promise I am at peace. #03112016 #myjourneytoBecome #On Becoming“.

Toke Makinwa’s new lover, who shared the good news  a few days ago on his face book page along side with Toke Makinwa photograph said: “How do love stories start with you“. Toke Makinwa also spoke about her new status by stating that “You never know how strong you are until you are tested and tried. I used to underestimate myself, I would usually speak myself out of doing things. The voice of fear was so loud till what I feared  most happened (like Job) and in my confusion and fear, not knowing what next, I had to learn the hard way and fear but through it all I found a new me. A girl I didn’t know existed and it really been fun knowing her.

“ I remembered when I moved into my new flat, I didn’t know I would make it through, but God was there for me. Each time I tried to settle, I felt I was insulting God, did I create myself. Do I not trust Him? He not sufficient? And true to his words, he always look out for this little girl and each time I asked, how did I come this far, how am I able to stand, pay bills, thrive and not just survived, I feel so much comfort and I confront my fears about going futher. I am all grown up“ says Toke Makinwa.

Oluseyi who is a graduate of Wichita State University, is the COO of a fast-rising, engineering and construction company in Nigeria named INITORCS. He resides in  Kansas and this love birds are not allowing distance to be a barrier in their relationship.  Though, the new lovers are believed to be taking things easy and have no intentions of making their love life public yet, one of the things which cannot be hidden for too long is said to be Love.

On January 2017, Toke Makinwa went on her Instagram Page to post an adorable  photograph  of she and her boyfriend, Seyi Kuye. It attracted much attention. She later deleted the photograph.

Why Chief ALEX DUDUYEMI Will Miss His...