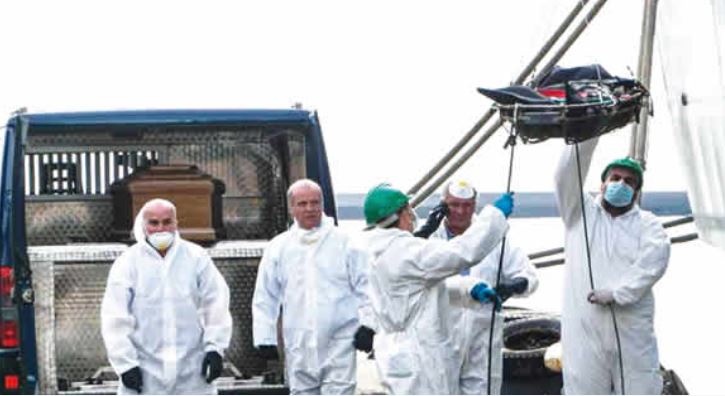 Two men have been arrested and charged in Italy as investigators look into the deaths of 26 Nigerian women and girls, who are suspected to have been murdered while attempting to cross the Mediterranean, according to a report by The Guardian UK.
Prosecutors revealed that the bodies of the women were brought to the southern Italian port of Salerno by the Spanish ship Cantabria on Sunday. Investigation has commenced over suspicions that the women, some as young as 14, may have been abused and killed.
The bodies were recovered by Cantabria, which works as part of the EU’s Sophia anti-trafficking operation, from two separate shipwrecks – 23 from one and three from the other. Fifty-three people are believed to be missing.
The men arrested have been named as Al Mabrouc Wisam Harar, from Libya, and Egyptian Mohamed Ali Al Bouzid. The pair are believed to have skippered one of the boats. They were identified by survivors who were among the 375 brought to Salerno by Cantabria. The two men are accused of organising and trafficking at least 150 people on the two sunken boats, but prosecutors have not made a direct link between the two men and the women’s deaths, said Rosa Maria Falasca, chief of staff at Salerno’s prefecture.
Autopsies on the bodies should be completed over the next week.
The prefect of Salerno, Salvatore Malfi, told the Italian press that the women had been travelling alongside men and when the vessels sank, “unfortunately, the women suffered the worst of it”.
But in response to concerns that the women were being trafficked for the sex trade, he added: “S*x trafficking routes are different, with different dynamics used. Loading women on to a boat is too risky for the traffickers, as they could risk losing all of their ‘goods’ – as they like to call them – in one fell swoop.”
Marco Rotunno, an Italy spokesman for the UN refugee agency (UNHCR), said his colleagues were at the port in Salerno when the bodies were brought in.
“It was a very tough experience,” he said. “One lady from Nigeria lost all her three children.”
He added that 90% of migrant women arrive with bruises and other signs of violence.
“It’s very rare to find a woman who hasn’t been abused, only in exceptional cases, maybe when they are travelling with their husband. But also women travelling alone with their children have been abused.”
Most of the survivors were either Nigerian or from other sub-Saharan countries including Ghana, Sudan and Senegal.
The survivors were among over 2,560 migrants saved over four days. People still continue to attempt the crossing despite a pact between Italy and Libya to stem the flow, which led to a drop in arrivals by almost 70% since the summer, according to figures released last week by Italy’s interior ministry.
Two Men Who Allegedly Killed 26 Nigerian Women Trying to Cross the Mediterranean Arrested in Italy was last modified: November 8th, 2017 by Arinze Ago

Rohr Orders Mikel, Uzoho, Others To Stay Away From Super Eagles Camp

Why My Mission To The US Matters...