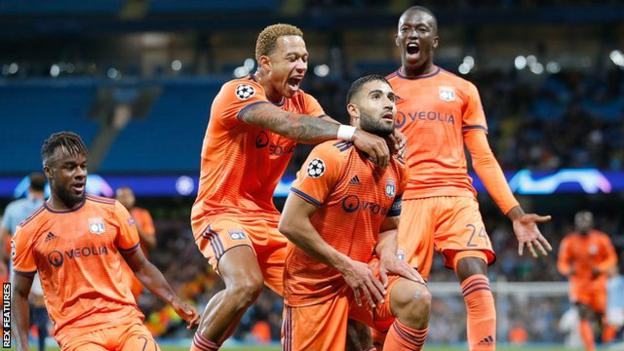 Manchester City’s Champions League campaign got off to a poor start as the Premier League champions suffered a surprise 2-1 defeat against Lyon at the Etihad Stadium.

City, who are favourites to win this season’s competition with some bookmakers, fell further behind before half-time – Lyon captain Fekir finding the net from 25 yards after Fernandinho gave the ball away inside his own half.

Bernardo Silva gave the hosts a lifeline after being picked out by Leroy Sane, but City – lackluster for long spells – were unable to avoid a first defeat of the season.

With Group F rivals Shakhtar Donetsk and Hoffenheim drawing 2-2 in Ukraine earlier on Wednesday, City are bottom of the group.

They also became the first English side in Champions League history to lose four consecutive matches in the competition having also been beaten in last season’s last-16 second leg by Basel, as well as both legs of the quarter-final against Liverpool.

City, looking to replicate their domestic dominance in Europe, were a shadow of the side that swept to 100 points in the Premier League last season.

French defender Aymeric Laporte headed against the outside of the post from Ilkay Gundogan’s cross, while Gabriel Jesus and Sergio Aguero were denied by excellent saves from Anthony Lopes.

City, however, appeared to miss Pep Guardiola’s direction from the sidelines.

The City boss watched his side’s wretched performance from a seat high in the stand as he served a touchline ban following his sending-off in last season’s Champions League quarter-final defeat against Liverpool.

Assistant coach Mikel Arteta took over duties in the dugout but the former Arsenal midfielder oversaw a disjointed performance which was as flat as the atmosphere inside the ground.

Silva’s goal, after Sane had glided past ex-Manchester United defender Rafael midway in the second half, reinvigorated his side.

However, City now find themselves playing catch up in a group they were expected to dominate.

Guardiola’s side made it to the last eight of the Champions League last season and have never gone beyond the semi-finals.

Lyon could have been forgiven for fearing their visit to the Etihad.

Yet they were effective at both ends of the pitch as they executed the perfect gameplan to stun the champions of England.

Jason Denayer, who left City for Lyon in August without making a first-team appearance, was impressive at the back while ex-Manchester United forward Memphis Depay hit the post at 2-0 from another sweeping counter-attack.

Fekir led by example. The Lyon skipper, heavily linked with a move to Liverpool in the summer, made one goal and scored the other.