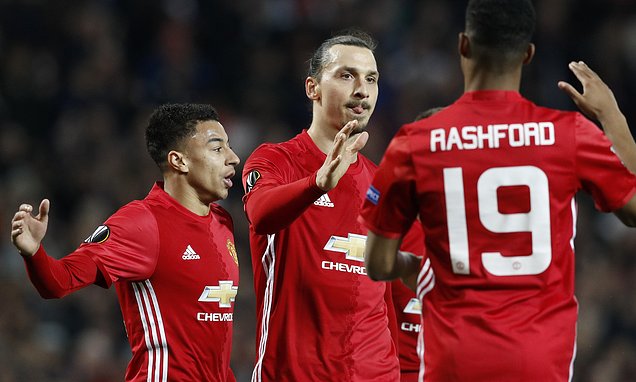 Manchester United manager, Jose Mourinho has shown a lot of satisfaction with his team’s display as they were held to a draw by FC Rostov in the first leg of their Europa League last-16 tie in Russia.

On a challenging pitch at the Olymp-2 Stadium – which was criticised by Mourinho before the match – midfielder Paul Pogba miscued from inside the box early on.

The Swedish striker shot over the crossbar in the second half, before Rostov forward Aleksandr Bukharov latched on to Timofei Kalachev’s pass for the equaliser.

Aleksandr Erokhin stabbed a shot wide for the hosts from a promising position and United’s Marouane Fellaini headed straight at the goalkeeper from a corner.

“We played what the game demanded and we played well. We made one defensive mistake.

“l remember as a kid some matches like this in Portugal – non-league and amateur pitches. To see my players coping with it and the humility to fight for every ball is a good feeling for me.

“We have an open result for the second leg with a little advantage for us. There are no injuries.”

United goalscorer Henrikh Mkhitaryan, speaking to BT Sport noted that his side could have avoided conceding any goal.

“It does not matter if you are leading 1-0, you have to be ready for everything.

“We conceded the goal and there was a mistake – but we have a second game to come.”

Rostov are back in league action when they take on Terek Grozny on Sunday, while Manchester United visit Chelsea in the FA Cup quarter-final on Monday (kick-off 19:45 GMT).

Referring to the cup game against his old club, Mourinho said: “Monday we don’t go with a Nicky Butt [head of youth academy] team. We cannot go with Nicky Butt’s team.