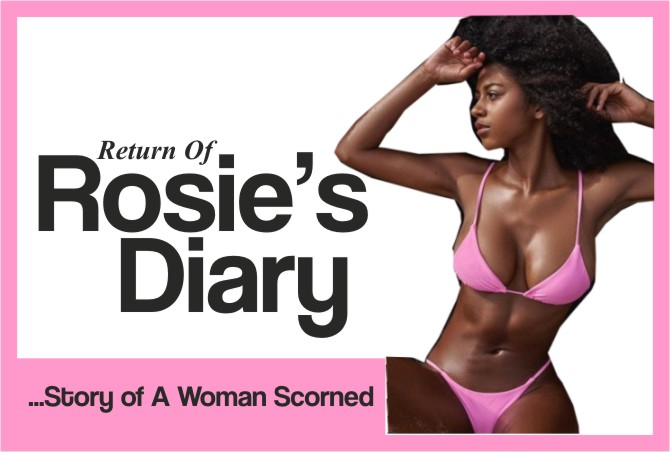 His face fell. For a fleeting moment, I could tell from the look on his face that he was utterly ashamed of himself for what he just did to me. He didn’t know whether to go on his knees and beg me all over again or to just simply leave the room, especially now that he had just found out that he was not the first to rape me.

“Rosie, I have begged you to forgive me….please…” he pleaded again, really feeling sorry. I just stood there speechless, watching him, hating him.

“Is my wife aware of this? Does she know you’re pregnant?” he asked me the first question I knew he would ask me.

“No, she doesn’t know,” I lied. It was the smartest thing to do under the circumstance.

I shrugged. “I didn’t think that will do any good. There is no way she would bring me to Lagos if she knew I was pregnant.” Uncle Fred would’ve been shocked to know that not only did his wife know I was pregnant, but she also wanted me to keep the pregnancy and give birth right under her roof because that’s what she said her pastors told her to do if she wants to have her own child.

“So, this guy that raped you, is he a friend of yours or a total stranger?” he inquired. I didn’t know what to tell him. If I gave him an answer, he will ask another question.

“He was not a total stranger, but really, I don’t want to talk about it, it’s not something I’m pleased to talk about,” I tried to explain to him.

“But if you’re asking for my help, I need to have an idea what kind of problem you’re in, don’t you think?” he’d thrown at me.

I shook my head slowly in disagreement. “Point of correction, Uncle Fred, I am not begging for your help, we have a deal here. You just raped me, right? You just forced yourself on me! And I am simply demanding that you keep to your own side of the bargain so I can keep my mouth shut about what just happened here!”

The man was obviously shocked at the way I was facing up to him. He knew I was no longer intimidated by his ‘gragra’, he could see that beneath my innocent-looking façade was a hard little girl who had been bruised and battered by monsters like him. And now, she was not scared of anybody anymore, she was going to take her destiny in her own hands.

“So, where is my money? Where is the ten thousand naira?” I demanded.

The man was just staring at me as though he had seen a ghost. He could not believe it was the same quiet Rosemary that was talking to him like a hard babe from the streets. He looked deep into my face for several seconds, his gaze fixed on mine. I met his gaze without batting an eyelid. It was then he knew I meant business.

“Uncle Fred, I am not upset, I am only desperate to get my life back again. And that’s why I need that money as soon as possible,” I told him pointedly.

“Okay, I have heard you, no problems,” he assured me, sounding like he now understood where I was coming from. “I will give you the money, but I don’t have it here with me, I don’t have that much money in the house right now. I will have to get it for you tomorrow when I return from the office.”

I processed what he just said. Could he be trying to by himself time to figure out how he could outsmart me? Will he try and cook up some lies to tell his wife and make me look like the wayward girl?

“Listen, I am being honest with you, I will lt you have the money tomorrow,” he said as though he read my mind and knew I had my doubts about him. “But you still need my help, Rosie, you still need me to help you,” he continued.

“Okay, thank you, but how do I need your help apart from the money I need you to give me?” I asked him, wondering what he was getting at?

“Do you know any hospital you can go to and ask for a D&C?<“ he quizzed me, a serious look on his face. “Or do you think it’s every hospital or clinic that undertakes D&C? And even for those who do it, you must go with either the man responsible for the pregnancy or your guardians or parents. So, who do you know that could go with you?”

I got his point. He is absolutely correct. This thing is not really quite as straightforward as I thought it was, even with the ten thousand naira complete in my hands.

“So, do you now see that you still need me, even after I must’ve given you the money by tomorrow?” he continued.

I nodded. “So, how will you help me?” I asked, curious to know what he has in mind.

“I will help you find out which of the hospitals outside of our neighbourhood you can go to. Then, I will go with you and stand as your guardian and sign the necessary documents that must be signed before you can be operated on.”

“Oh, wow! Thank you very much, Uncle Fred, that’s so kind of you,” I thanked him. But somehow, something kept ringing in my head, warning me there was still a catch to his generosity.

“Don’t thank me yet, young lady, there is still one little thing we need to agree on,” he’d cautioned me. I knew it. I knew he couldn’t be doing all of that for free, there just had to be something in it for him. And I was right. He dropped the clincher: “you will to promise me that you and I will continue to enjoy ourselves together even after you have done the D&C!”

READ ALSO: WILL GOV. WIKE AGREE TO TEAM UP WITH TINUBU?

Will Gov. WIKE Agree To Team Up With TINUBU?

6 Lies Men Tell All The Time To Deceive Babes

Help! My Hubby Is Terrible In Bed…...

My Husband Dislikes My Mum