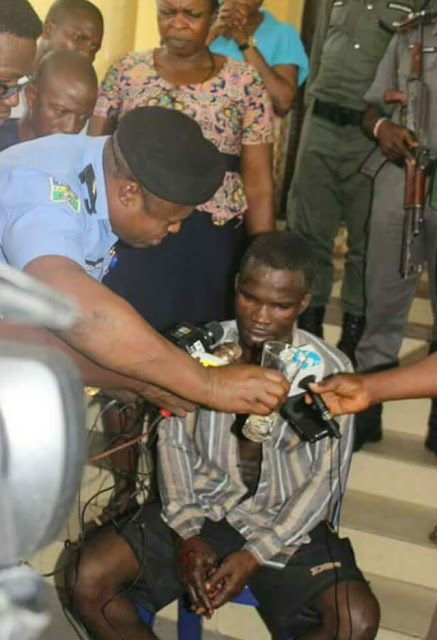 Men of the Nigeria police have finally re-arrested a dreaded killer and money ritualist who killed an 8-year-old girl in Rivers state.

The suspected ritual killer, Ifeanyi Dike, who murdered an eight-year-old girl, Victory Chikamso Nmezuwuba, has been rearrested in the early hours of this morning and is currently under secure arrest.
The suspect was rearrested in Jos, Plateau State capital, by security operatives on Thursday, according to Punch.
Dike had invited Chikamso into his room, killed and collected the parts he needed, while the girl’s parents were looking for her.
He was caught while trying to dump the body at a refuse dump in Rivers state.
In a report by Channels TV, the seemingly unrepentant suspect also broke into the home of an unnamed resident and stabbed him in what appears to be a robbery incident. The Rivers Command is currently working with its Counterpart in Jos to bring him back to Port Harcourt to face the law.
UNIPORT Money Ritualist Who Murdered 8-year-old Girl Finally Rearrested in Jos was last modified: September 8th, 2017 by Arinze Ago