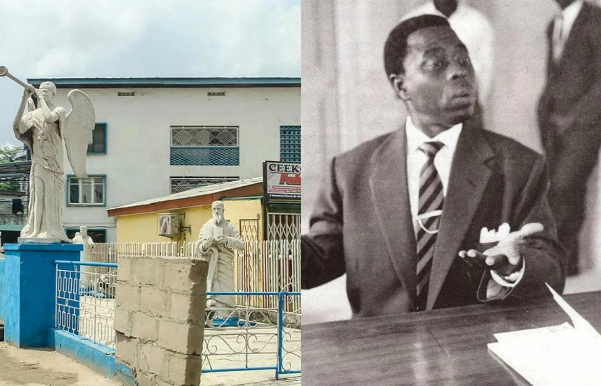 In the beginning, there lived a man whose real names were Olufunmilayo Immanuel Odumosu, but he fondly called himself “Jesu Oyingbo”. He was highly revered, adored and venerated by his disciples and followers, who believed that he loomed larger than life. He taught his adherents that he was the real Jesus Christ and his presence on earth was his second coming.

Indeed, many of Odumosu’s adherents had to sell their properties, forsake their families and joined the religious leader to build a spiritual enclave.

Although the self-styled religious leader proclaimed himself Jesu Oyingbo, he never shared any trait with Jesus Christ who resurrected the third day. In actual fact, he failed to resurrect the third day as he had prophesied.

In this exclusive piece, popular online platform Naij.com narrated the journey of this Lagos god on how he rose to become “god amongst men” in oyigbo

“I am He. I am Jesus Christ, the very one whose second coming was foretold in the New Testament. I have come, and those who believe in me will have an everlasting life and joy. I am the missing of the trinity. I have come to prepare the faithful for the judgment day.” It was this declaration made in June 1959 that officially marked the transformation of 43-year-old Immanuel Olufunmilayo Odumosu to Jesu Oyingbo.

It was on the basis of the convincing and convicting declaration that he set up a group headquartered in Oyingbo suburbs of Lagos state. It did not take him time to draw to himself a crowd of people who were interested in his supposed supernatural personality.

This group of loyalists trooped to his enclave which he called the Universal College of Regeneration (UCR), believing in totality in his larger than life image he created. Perhaps his background in the carpentry vocation with his uncle, which is similar to what Jesus Christ had with his foster father Joseph, led them to believe in the genuineness of the Ijebu-Ode born Immanuel proclamation. On his own part, he claimed that his declaration was a result of a divine revelation straight from the chambers of heaven.

He claimed that having no formal education, when he suddenly received insight into the secret meanings of the Bible, as well as the power to perform miracles, “save people from their earthly worries, comfort and redeem them,” he knew that he was the second coming of Jesus Christ, the “I AM.”

He emphasised that he did not need to be a Jew before he could be Jesus, since he and his followers were simply Jews in dispersion.

Oyingbo, being a bubbling municipal area in the Lagos which was in itself the capital of commercial activities in the country, his activities drew attention to Lagos in the way ants are drawn to sugar. In no time, the country was awash with tales about the man who had declared himself to be the living reincarnation of Jesus Christ. However, his pattern of apostleship was distinctly different from the Bible records of Jesus Christ or any of his apostles.

First of all, his mode of conversion involved flogging the new convert nine strokes of the cane —a cane which many said he inherited from his grandfather. He described the strokes being given to them as the baptism which they needed to become a part of the flock under his care.

Also, all his members were brought under the communal enclave. The baptism haven been done, these converts went back to their families, packed their belongings, forsook the world and followed him.

Despite attempts by different families to hold him responsible for such actions, he always came out of the police cases clean.

These members then formed not only his congregation, but also his workforce, as he was what one might describe as a “Pastorpreneur” owning a printing outfit, a bakery, restaurant, barbing salon, a construction company, real estate development and other business outfit within his community.

He was very particular when he stated clearly that his wealth was not a result of offerings from his flock, but income from the businesses, even though he sometimes received gifts from them despite the fringe benefits which he considered his entitlement as “their Redeemer.”

One of these fringe benefits was the fact that he had unlimited access to any of the wives of the men in his flock, and could choose to do with them whatsoever he pleased.

In this light, there was an occasion when he married a man’s wife in order to punish him for his errant behaviours. On another occasion, he handed over the wife of an unruly member to other men in the flock.

Not to mention that at his will, he could choose to call any of the women who pleased him to satisfy his needs at any time. Notwithstanding any of these, he married a large number of wives ranging somewhere between 30 and 80. The real number of his wives was not possible to determine, as the communal lifestyle adopted where any members’ wives could be found in acting capacity.

In June 1959, as at which time he already had seven wives, when he was asked about his polygamous intentions, he said: “I have not finished with wives yet. I am going to marry more. To save the faithful, I must behave like one of themselves.

I must marry more women, for are they not the sheep and I the shepherd?” Since he had unquestioned sexual privileges over the wives of any and every of his member, being his divine benefit for leading them out of darkness to the light, he must have been faithfully tending the flock in his own unique way.

However, most official reports place the figure of his personal wives somewhere around 34, about three of whom were his biological daughters.

The number of his children was also impossible to pin down since some of the members of his enclave went as far as adopting Odumosu as their surname, but about 80 were officially listed and recognised. Most of his children were sheltered and protected within the enclave, and did not even get formal education except for a few whose mothers took charge of it. However, they enjoyed other privileges like cars and drivers at their disposal to move around as well as financial benefits.

Out of this number, NAIJ.com gathered that not all accepted the religion or mode of worship and a few even left the community as they refused to be coerced into adopting a religion they were not comfortable with.

One of his daughters, Bukola Immanuel Odumosu, a graduate of Economics from Lagos state university stated bluntly that even though he was clearly her father, she had doubt about him being her saviour. Interestingly, he was also said to be practising a unique religion which blended Christianity, Islam, African traditional religions and even paganism. He also blended it with the profiteering motive of his business outfits.

With about 700 followers, he had more than enough work force for his businesses. On a personal level, he was described by neighbours, friends and even his children as a lively, nice and humorous man who was friendly with all, and never got tired of trying to convert them. Most of his neighbours said the only issue they had was the noise caused by their activities from the early hours of the morning, even though they could not complain.

He, however, entertained them in the evenings by projecting movies for people to gather and watch, creating a sort of cinema-like experience for them. Even though he later relocated to Maryland, the name Jesu Oyingbo stuck, having been where he started.

The Jesus that I know is the rock of ages! Most Lagosians who were born long after his death, most likely first heard the name through this song. Notably, most of his buildings on Immanuel Street, Maryland had the inscriptions such as ‘’Merciful and Mighty,’’ “Prince of Peace” and ‘’Everlasting Father.” Some of them were also surrounded by statues of Christ, caterpillar tractors, sculptures of lions and mermaids with water spurting from their mouths, a situation which caused people to wonder exactly what his religion was about.

He justified his liberal and abundant life by saying that while the first Jesus came to sacrifice and suffer, taking care of the cross-carrying and crucifixion, he, the second Jesus simply came to enjoy life. “I have come to enjoy my life, my friend.” In his life, he amassed abundant wealth both in cash and kind.

He had a vast estate and some of his listed properties included numbers 7A, 7B, 9, 10,11,13,14,15,17 Emmanuel Street, Maryland, Lagos; 37 Aliu Street via Felicia Ayodeji Street, off Ikorodu Road, Ketu, Lagos; 570/622/624 Ikorodu Road, Ketu, Mile 12, Lagos. It was also believed that he left properties and funds in the UK. Unexpectedly, nature called and the supposedly immortal “Jesu Oyingbo” answered.

He was gripped by the cold hands of death in 1988 when he was aged 73, and he died in an hospital outside the commune. Most of his followers did not believe that their messiah had died, and waited for him to resurrect after three days, and when he failed to, most of them got disheartened.

As could be expected from a husband to many, and father to dozens, he died without a will and a mini civil war began soon after concerning the sharing of the assets. It was wives against wives, children against children and even some long-term members of the movement who felt they were entitled to the properties joined in the battle.

The fight was both petty and dirty, and the struggle so immense that the eldest son, Olukayode Immanuel Odumosu took them to court. It was in the court that the issues were not only resolved, but a lot of improprieties which were being perpetrated within the enclave were brought to the light including the sharing of wives and incestful relationships. In 1997, the children won and the disciples who were resident in Pa Odumosu’s Maryland spiritual enclave in Lagos were evicted. On 18th June 2014, Justice Ronke Harrison of the probate division of the Ikeja High Court ruled that all 167 children are entitled to share in the vast estate as beneficiaries in equal proportion. It was at this point that the church of Jesu Oyingbo which already had a deep crack in its foundations following the death of their messiah, crumbled completely.

With the left over members leaving, the 56- year-old Olukayode who had been trying to hold the pieces together left to find some freedom for himself. But today, in an otherwise well-kept neighborhood in this city of eight million people, weeds have pushed through the cracks in the imperial courtyards and dust has settled inside the deserted buildings.

The enclave, which is now just made of deserted buildings has become a hideout for criminals and the few members left do not even have enough momentum to pull more into the fold.

The empire which his son, in 1998, said would resurrect is yet to resurrect just as its founder failed to resurrect. In fact, we Nigerians await the second coming of Jesu Oyingbo.

Untold Story Of Jesu Oyingbo + How he raised his empire and died in 1988 in Lagos was last modified: November 7th, 2017 by Online Source