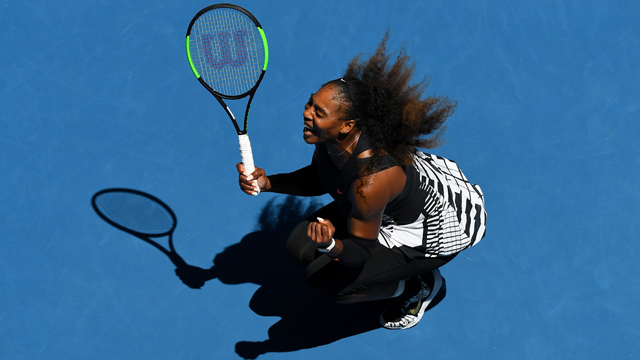 Serena Williams passed her toughest test so far at the US Open to beat Karolina Pliskova and reach the semi-finals for a ninth consecutive time.

If she wins it would be her 24th major title – equalling Australian Margaret Court’s all-time record.

“I don’t think I have another 10 years of having opportunities to be able to play and win championships,” said former world number one Williams.

“Every match really means a lot to me. I kind of go out there and I just do the best that I can.”

Six-time champion Williams has reached the semi-finals in her past nine appearances at Flushing Meadows, although missed the tournament in 2010 with a foot injury and last year because she was pregnant.

Williams is only playing her eighth tournament since becoming a mother but had only dropped one set – in her last-16 match against Estonia’s Kaia Kanepi – on her way to the last eight.

However, having lost to Angelique Kerber in the Wimbledon final, there were question marks how she would fare against another high-calibre player.

After a slow start against the big-serving former number one, Williams grew into the match as she responded to some vociferous backing from Arthur Ashe Stadium.

The six-time US Open champion won eight games in a row – four at the end of the first and four at the start of the second – to help her secure victory in one hour 26 minutes.

It was her first win over a top-10 ranked player since beating Britain’s Johanna Konta at the 2017 Australian Open.

“I feel like I’m at a level where I can play and try to compete against these amazing women in the top 10,” said Williams, who had lost her three previous matches against top-10 players.