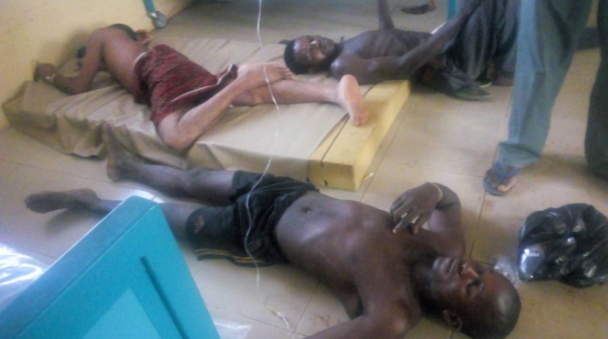 Residents of some communities in Ogoja local government area of Cross River state are yet to recover from the shock of the food poisoning which killed 2 persons and landed 50 in hospitals, The Cable reports.

Many had deserted their homes when the press visited the affected communities during the weekend. Those remaining were reluctant to speak about the unfortunate incident, but they gathered in circles to discuss it.

According to a witness, trouble started after some residents patronised a popular restaurant at Obosun junction in Mbube east, Ogoja.

The witness said after eating there on Friday morning, some of the residents started vomiting and also showed various signs of health disorders.

Obosun junction is a central spot where residents of  Nkum, Ojirim, Ogbese, Egbe Mbube and Aragba usually meet, so some members of these communities also ate at the restaurant.

“I watched as one man had just arrived at his home and as he was about entering his house, he fell down and started vomiting blood,” one of the locals named Esther, said.

Family members of the victims in the hospital

“It continued with other people too. So there was chaos everywhere with people running up and down and crying.

“We were all confused because something like this has never happened before; we didn’t know what to do seeing that the number of people that were vomiting was increasing. At some point they were too many, all we could do was to cry before some of the villagers intervened and took them to the hospital.”

Robert Abuah, a motorcyclist, recalled how he started noticing some changes in his body not long after he had left the restaurant.

“I carried my passenger to the junction and went there to eat just like I use to do every other day. So I finished eating and left. After some time, I became very weak such that I didn’t even know myself at that point. So, I managed to call my brother who took me to Adibe Hospital in Bekwara LGA for treatment,” he said.

“Then my eyes were turning seriously, I couldn’t even stand firm on the ground unlike now that I can even walk a bit.”

While the tension was growing with increasing cases of vomiting among the locals, Anna Erah, the food vendor, and Edward, her husband, were summoned.

She was in her farm when people started vomiting, so she was brought back to the village.

“She was pleading and trying to convince people that she didn’t put anything in the food, contrary to what some were saying,” Regina Odey, another witness, said.

“In a bid to prove that, she and her husband took the food and not long afterwards, they started vomiting blood. They were rushed to the hospital, where they died afterwards.”

Godwin Abang, a survivor who resides in Mbube east, narrated his encounter to TheCable. He said he lost touch with reality, but regained consciousness when he was brought into a church in the area.

“I started noticing some signs in my body though I did not vomit. So I took holy water and anointing oil and after some time, I fell down and didn’t know myself again till I discovered myself at the parish house,” he said.

For Regina Uwani whose husband was a victim, hers is a story of thanksgiving, as her husband is gradually recovering.

Looking restless with her wrapper firmly tied around her waist, she recalled how she nearly lost him.

“When I saw him in the condition he was in, I almost lost hope; I wasn’t myself for some time,” she said.

“He and the driver were driving towards Ojirim community when the driver started to vomit blood. My husband followed suit and was even rolling on the ground. Before you know what was happening, people were also falling down and vomiting anyhow.

“So, we all started crying before some motorcyclists rushed them to this hospital.”

TheCable visited the Ogoja General Hospital where most of the victims were being treated. Their relations and friends were seen in front of the wards housing them. They all looked visibly worried with many unanswered questions all over their faces.

Although the hospital authorities refused to give the exact number of those admitted as a result of the incident, some of the staff who spoke to TheCable on the condition of anonymity, revealed that at least 50 victims were affected.

“Some people have said they are up to hundred, it’s not true. About 40 people were brought in here, while an estimated 10 taken to other hospitals from the information I have,” a male nurse said.

“Right now, we can’t say for sure what the exact situation is like because a good number of them are still being admitted. For now, our concern is to restore their health situation which is what we are trying to do.”

Paper work; Seems the nurse has it all figured out in her files.

One of the nurses

One of the doctors said the patients were responding to treatment, though he declined to make further comments.

“I cannot give you the exact number of patients at the moment. This is a government case and as you can see, more persons are still being brought in,” the doctor said.

“I cannot tell you the exact figure right now.”

He commended the management of Oboso hospital for their prompt response in evacuating the victims to the Ogoja General Hospital for treatment.