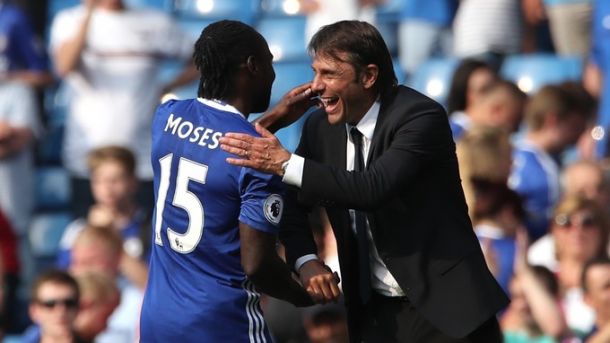 Chelsea winger, Victor Moses has showered accolade on his boss, Antonio Conte for his role in improving him and his teammates at Stamford Bridge.

The Nigerian International had a great deal of contribution in the Blues league victory despite playing in a strange role – having spent previous seasons on loan [Liverpool, Stoke City and West Ham United].

In the season under review, Moses featured 34 times for the Londoners with three goals to show for it. He was quick to pay tribute to Conte who gave him a chance to prove his worth.

“We’ve got a good manager here who is willing to give everybody an opportunity,” Moses told club website.

“He gave me that opportunity and I haven’t looked back. It’s all about hard work, I’ve never worked so hard in my career and I just want to keep on improving in the position I’m playing.

“He’s taken our game to the next level, he pushes us to our limit. Each and every one of us totally respects him. We love him as our manager. He has great passion and he’s played the game before.

“It’s good to have a manager who believes in every player. He’s given us all massive confidence and we’re enjoying our football.