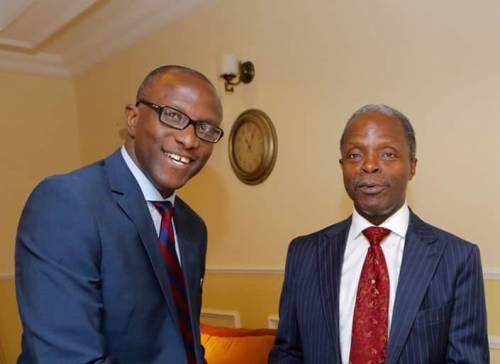 The spokesman of Vice-President Yemi Osinbajo, Laolu Akande, has apologised to Abayomi Adeshida, a photojournalist with Vanguard, who was beaten up by security operatives at Aso Rock on Thursday morning.

The incident took place at the banquet hall of the presidential villa in Abuja where the Nigerians in Diaspora Commission (NIDCOM), chaired by Abike Dabiri-Erewa, organised a summit.

Some Department of State Services (DSS) operatives attached to the office of the vice-president had descended on Adeshida at the event.

TheCable had reported the assault which was initially denied on social media.

But in a tweet, Akande expressed regrets over the incident, disclosing that he had reached out to the journalist involved.

Journalists understand that Osinbajo’s spokesman apologised to Adeshida after a backlash.

President Muhammadu Buhari had ordered the sack of some aides of his deputy on Tuesday.

“The needless scuffle btw a villa accredited photographer, Mr Adeshida & one of our security aides earlier today has since been resolved. Incident is regretted & I have apologized to him for any embarrassment caused. Also, a list circulating in the media on d so-called sacked,” Akande tweeted.