Home News WATCH: Those idiots Biafrans that say they want to be Nigerians are pigs – Nnamdi Kanu
News 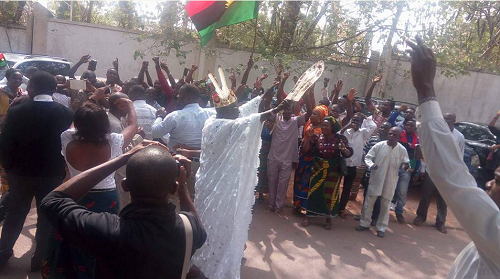 Leader of the Indigenous People of Biafra, IPOB, Nnamdi Kanu has claimed that Hausa/Fulani have terrorize the Igbo socio-political organization into a “position of silence and stupor,” saying ”all those idiots with Biafran names that say they want to be Nigerians are pigs”

Kanu wondered why nobody from the South East has been arrested for declaring Oduduwa Republic but law enforcement agents have been coming hard at those clamouring for the restoration of Biafra.

According to him, “I will not belong to one Nigeria and can never want it, did the Yorubas not announced Oduduwa Republic? Has anyone been arrested?

“Why Is it that we declare Biafra and they are arresting and shooting at us and Ohanaeze has said nothing.

“Ohanaeze has been terrorized into a state of silence and stupor by Hausa Fulani, who are using their political terrorism to terrorize people everywhere they go. Hausa Fulani use their terrorism to sack one of our sisters in the Pensions Board.

“There are law enforcement agents to enforce the law and the law says if you remove somebody from the Pensions Board from a particular geo-political zone and when you are looking for a replacement you go back to the ethnic group and pick a replacement but Nigerians are lawless animals.

“I want to stress that if you are a Nigerian you are evil and a child of Satan.

“We are tired, don’t want to stay in a country were you wake up in the morning and they sack you. The other day they sacked from military officers from the South East and nobody is talking.

“Only Buhari’s family members occupy DSS, it’s a family affair now, that means if you touch any Hausa Fulani especially from Katsina, you are in trouble, DSS will kidnap you in the night.

“I insist, to stay in Nigeria is evil in every way and moreover, the name Nigeria is not proper even Charly boy knows it.

“All those idiots with Biafran names that say they want to be Nigerians are pigs.”

WATCH: Those idiots Biafrans that say they want to be Nigerians are pigs – Nnamdi Kanu was last modified: August 2nd, 2017 by Reporter