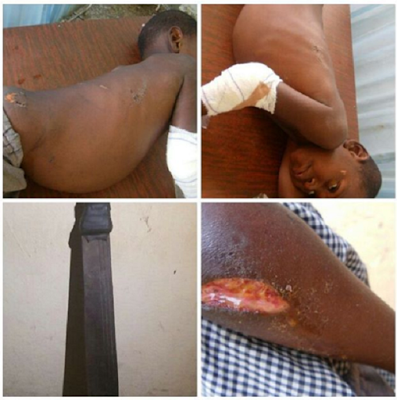 The little boy, identified as Emmanuel was allegedly brutalized by his step father for buying bread instead of cigarette he was sent to buy. According to Basic Right Counsel (BRC) who rescued the boy, his step father inflicted a deep machete cut on his right forearm. He is currently at the Teaching hospital where he is receiving treatment after the forearm bone got infected. BRC wrote via their Instagram page;

“This is Emmanuel A 6yrs old boy whose stepfather inflicted deep machete cut on his right forearm bone is receiving treatment. The child’s crime was that he bought bread instead of the cigarette he was sent to buy. We sent our rescue team, who took him to General Hospital, The child was later referred from General Hospital to a Teaching hospital because the forearm bone is affected and infected.”

Weird: Stepfather machetes 6-year-old boy for buying him bread instead of cigarette was last modified: May 27th, 2017 by Reporter