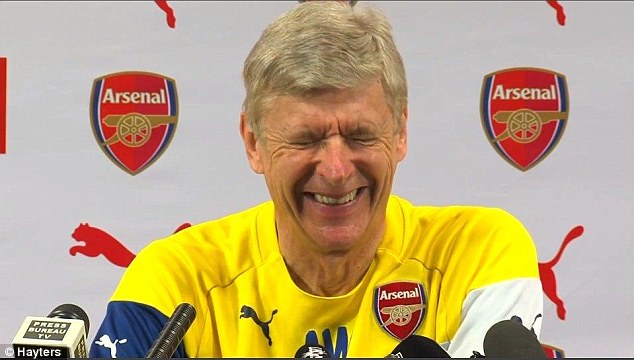 Arsene Wenger has taken aim at Manchester City, saying the table-toppers have an advantage because of their ‘petrol money’.

Pep Guardiola’s side set a new record for wins in the Premier League, chalking up their 15th against Swansea on Wednesday night.

It comes after club, which is owned by Sheikh Mansour bin Zayed Al Nahyan, a member of Abu Dhabi’s ruling Al-Nahyan family, spent £200million over the summer to bring in the likes of Bernardo Silva, Ederson, Kyle Walker, Benjamin Mendy and Danilo.

And Wenger, who also revealed that he will begin talks with Jack Wilshere at the end of the month, believes the amount of money they spent gives them a huge advantage.

“Look, we had no petrol but ideas. They have petrol and ideas, so that makes it more efficient,” he said.

‘Everybody projects they will last. Everything goes for them inside the games. They have quality to turn it in their favour. They have plenty of resources and quality.’

When asked again what he meant by ‘petrol’, he replied: “Yes, money and quality, that’s what I wanted to say”.

In their management, in their players, they have everything that’s needed. It’s not easy, you still have to respect that achievement.
Of Wilshere, who has featured 14 times this season after a string of injury problems in recent years, Wenger said: “I will talk to him.

“I said the end of December. I wanted to see how much he can contribute. I consider him an Arsenal man.”