Home News What I Found Out About Gov. SANWO-OLU & His Deputy
News

What I Found Out About Gov. SANWO-OLU & His Deputy 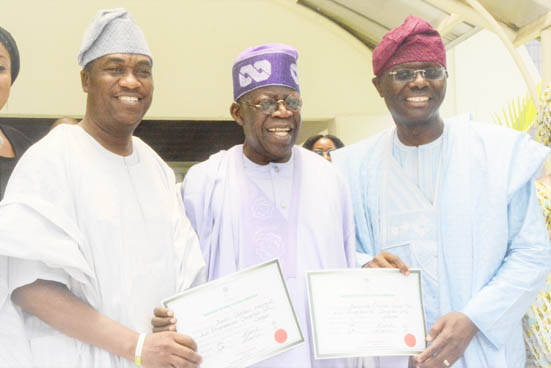 It is no longer news that the national leader of the All Progressives Congress, Asiwaju Bola Ahmed Tinubu has finally thrown his weight behind Lagos State Governor, Babajide Sanwo-Olu and his deputy, Obafemi Hamzat, to run for another term of four years.

This has finally put to rest the speculations making the rounds that Sanwo-Olu had been denied a second term by the Apex leadership body in Lagos, the GAC and by extension, Asiwaju himself. The rumour mills had been agog with the story that Sanwo-Olu had fallen out with some members of the GAC and they had sworn to deal with him by denying him a ticket for a second term. Some even insisted Asiwaju was not happy with him as well.  More ridiculously, it was said that the former governor of Lagos State, Akinwunmi Ambode, was also ready to stage a comeback at the expense of governor Sanwo-Olu. But the Jagaban Borgu shocked all of Governor Sanwo-Olu’s detractors when he performed the ceremonial raising of hands of both Sanwo-Olu and his deputy, Babafemi Hamzat, at a party’s stakeholders’ meeting at Alausa. This drew huge cheers and resounding applause from party members.

Asiwaju, expectedly, was full of praises for the two gentlemen. Hear him: “We have a brilliant governor at the helm of affairs, who is supported by his deputy to build an unbreakable team that has raised the bar of excellence in governance in Lagos. I specially thank Dr Hamzat, who has been a very good assistant and a pillar of support to the governor.” He added: “Sanwo-Olu with Hamzat has raised an impenetrable team. I commend both of you and all members of the cabinet. You have all done wonderfully well and I must say that I am very proud of you.” This was just a few days after the Governance Advisory Council (GAC), the Lagos APC apex leadership body, had unanimously endorsed the duo for a second term.

Interestingly, Asiwaju also added that the party in Lagos would not prevent an aspirant vying for any position from testing their strength at the primaries. He said candidates that would be fielded by the party across elective positions must go through a delegate electoral system.

“Aspirants who are showing interest in positions from House of Assembly to the governorship, go and get your forms; you are going to contest primaries. There will not be any favouritism in the primaries,” he said. “We want you to contest and test your popularity. Nobody will ask to step down for another aspirant. Let all aspirants mobilise their supporters; if you win, you win. If you lose, there will not be a refund of the nomination form.”

The governor, Babajide Sanwo-Olu, was extremely elated and he could scarcely contain his excitement. He shocked many when he announced that Asiwaju Bola Ahmed Tinubu paid the N50m fee for his expression of interest and nomination form for his second term bid.    ”Asiwaju Tinubu is a generous man and he is doing a lot for people. He paid for my APC nomination and expression of interest forms to run for the second term,” the governor said.

Governor Sanwo-Olu also thanked Bola Tinubu for his guidance and the GAC leaders for standing by his government despite personal attacks they suffered from “wayward children” who turned against the party elders after benefiting from them. Sanwo-Olu, who described Tinubu as a “priceless symbol” of Lagos, said all hands must be on deck to ensure the state was not robbed of the presidential ticket of APC at the national primaries of the party.

“It is time to come together as determined party members and show genuine love towards our national leader, who is our priceless symbol and pride in Lagos. We are taking him national and we must ensure his house is fully united.”

Without a doubt, Asiwaju appears to have some soft spot for Sanwo-Olu and his deputy, Femi Hamzat. And it didn’t just start at this point when they needed his blessings for the second term. A Lagos Lawmaker whose identity would be concealed for obvious reasons revealed to City People days ago that Asiwaju has been particularly impressed with the duo of Sanwo-Olu and Hamzat, not just for the impressive performance they have put in so far, but also because of the fantastic relationship they have been able to build together.

The APC national leader has always been close to the two young men. They were in their thirties when he knew them. He met Sanwo-Olu when he was serving as Personal Assistant to former Lagos deputy governor, Femi Pedro while he met Femi Hamzat in the United States while he (Asiwaju) was governor of Lagos state. And over the years, they have proven to be brilliant minds, two talented and intelligent personalities you cannot just dismiss. But the information given to City People by the Lagos Lawmaker proves that Asiwaju’s love for his boys has grown even stronger.

According to the Lagos Lawmaker, he said he and his colleagues had gone to see the Jagaban to get his blessings as regards their aspirations when he began lecturing them about loyalty and the importance of being a team player. Hear him: “my colleagues and I had gone to see Asiwaju in Bourdillon in respect of our aspirations to contest for another term. We needed his blessings. We wanted his approval. He told us clearly that he has no issues with anybody going for another term so long as you have earned it by performing well enough to impress your people, put your house in order and ensure your aspirations align with that of your party leaders. But most importantly, he had stressed, being a team player. Asiwaju said that since Sanwo-Olu and Hamzat were elected governor and deputy, he has not had any issue or rift to settle between them. He has met with both of them separately several times and none of them has complained about the other to him. And none of their close aides mentioned anything like a rift between them either. The governor shows respect to his deputy and vice versa. Sanwo-Olu carries Hamzat along in every critical issue or decision making that has to do with the governance of Lagos State. They agree on policies together and the governor has ensured that he does not embarrass his deputy in any way or form. That is what a team player is all about. He credited both of them for being good team players. Asiwaju is really proud of them and how they have conducted themselves so far as the number one and two men in Lagos State. For Asiwaju, the success of every leader most times depends on how much of a team player you are. This is why he is impressed with Sanwo-Olu and his deputy.”

READ ALSO: HOW MY PAST WILL HELP MY BID TO BE GOVERNOR

What I Found Out About Gov. SANWO-OLU & His Deputy was last modified: May 26th, 2022 by Wale Lawal

How My Past Will Help My Bid To Be Governor

How To Get A US Visa Without...