Home News What I Will Miss Most About My Late Mum – OYO Gov., Engr. SEYI MAKINDE
News

What I Will Miss Most About My Late Mum – OYO Gov., Engr. SEYI MAKINDE 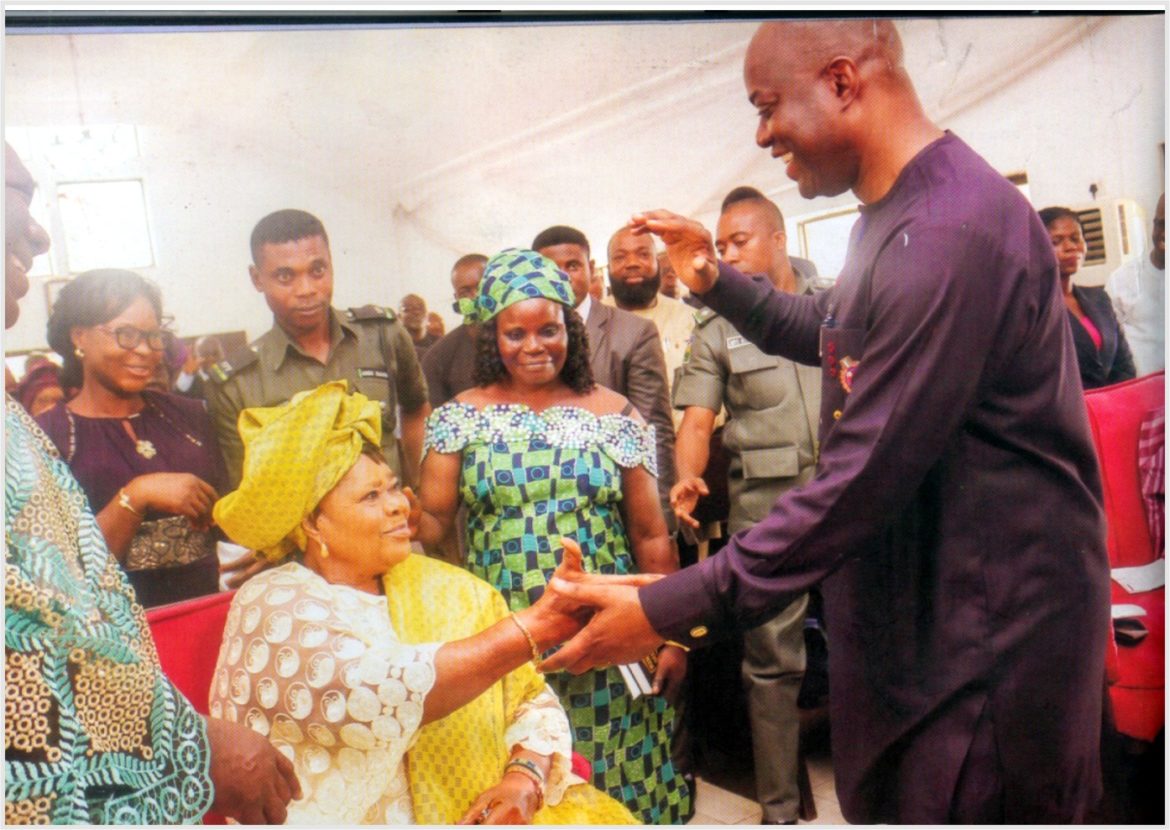 At the burial, the Governor revealed how close he was to his mum. Below are details of the Governors revelations about their closeness. We also bring you the story of the late woman everyone called Mama Seyi.

In her lifetime Chief (Mrs) Abigail Omojolagbe Amope Makinde (nee Omoregie) was well known in Ibadan. Many people loved her. She was highly principled and firm. She was born on November 7, 1939, and she died on 15th October 2020.

She was born in Osogbo, Osun State,  into the family of late Pa James Ojo Omoregie, a renowned rubber farmer originally from Benin, Edo State – but born and brought up in Akure, Ondo State and late Madam Jimirifo Omoregie (nee Ogini) from Uro Quarters, Akure, Ondo State. She and her older sister, Madam Victoria Modupe Alo were the only 2 surviving children of the 7 her mother bore. But she was the 3rd of 13 children from her father.

She attended St Thomas Primary School, Akure. She then proceeded to Anglican Girls’ School, Benin City where she completed Standard Six. After this, she went to work first at the University Teaching Hospital (UCH) Ibadan, as an Interpreter from 1957-1962. In 1964, she started working for the Western Region Government as a telephone operator. Her position at her new job took her to Ifetedo, Osun State, Akure, Okitipupa and Ondo in Ondo State and then back to Ibadan, Oyo State.

Meanwhile, in 1958, she met the late Pa Olatunbosun Makinde of Aigbofa Compound in Oja’ba, Ibadan.

They got married on October 11 of the same year. In June 1959, they had their first child, Olufunmilayo Sunday Makinde. She would have five other children, Kayode, Muyiwa, Seyi, Omololu, and Iyabo.

Mama was an industrious woman. Even whilst working as a civil servant, she was selling bread at Adeoyo State Hospital, Yemetu and running a cement business on the side. Mama invested her money into building her family. She was indeed a capable woman in the mold of the wife in Proverbs 31.

Madam Abigail led a fulfilled life, and her impact can be seen in the success of her children. She is the mother of engineers, pastors, lawyers, politicians, and entrepreneurs. Her legacy also lives on in her eighteen grandchildren, who loved her dearly.

Beyond her immediate family, Mama was a devout member of the St Paul’s Anglican Church, Yemetu.

She was a very active member of the Women’s group. Imole Obinrin Keji. Mama also served as Matron of the Christ Charity Band. Her favourite song, Cain and Abel, is a testimonial to her devotion to God. Her advice to all was always to give their best fruits to God. No wonder, she was called upon to serve as Chairperson at Harvest.

Mama was a blessing to her community. In 1982, she put in for early retirement from the civil service.

Just about a year later, she started a business manufacturing foams and mattresses. Mama Glory Foam Nigeria Limited, Mama’s business from 1983, currently employs about 10 people, and the company is still running. Because of her immense contributions to society, Mama was conferred with various awards during her lifetime. For example, in 2017, the Foam Sellers Association of Nigeria, New Gbagi Market Zone, Ibadan, presented her with a Merit Award for her unquantifiable contributions to the industry and humanity in general.

Her children got their entrepreneurial spirit from her. That is why they run businesses that can compete anywhere in the world. Her first son, Mr Olufunmilayo Sunday runs his own engineering and procuring business, Domat Ventures. Her 4th son, His Excellency, the Executive Governor of Oyo State, Seyi, started his company, Makon Group from scratch, at the age of 29.

Mama was well-known in her community for her philanthropy. She had several empowerment programmes to ensure that people in her community were taught how to make money and support themselves. She also gave scholarships and made several payments for the medical bills of the less privileged around her.

Everyone who knew Mama Seyi will miss her. She was a devoted mother, sister, aunt, friend, confidante, peacemaker, advocate for the voiceless, boss, philanthropist and excellent woman through and through. She aged in grace and died in honour. Her children will continue to strive to emulate the exemplary life she lived. Those she left behind can only try to copy her selflessness. As Mama would always say to her loved ones, “E se orire ni lIu Ibadan, ni toripe aro yin dara, osan yin dara. A ti ju gbogbo re lo, ale yin dara ni opolopo.” Mama ti se orire and so her deeds will go well with her.

In his tribute, Gov. Makinde revealed what he would miss about his mum:

“I grew up to know you as Mama Seyi, even though I was not your first child. I remember the story of how everyone came to know you as Mama Seyi. You talked about the circumstances of my birth. How you almost died giving birth to me. But God did not let that happen. In His infinite mercy, He let you live. You lived for me and for all of us.”

“Each time you wanted something from me, you would remind me that we almost died when you were giving birth to me. Even when I did not want to do what you asked, you had a way of saying, “If the son doesn’t know how to say, ‘Mama, please take this,’ I know how to say, ‘son, please bring this.’” This was your way of reminding me of our bond. Mama Seyi, I will never forget you.

“You taught me Contentment. I could only have what you could afford. You had a unique way of telling me when you did not have. You did not even have to say the words. When I was little, and’ would come to you to ask for a Christmas gift, you would say ‘I like yesterday?’ And I knew that meant that if I didn’t get a gift the previous day,’I  should not expect any that day.”

Mama, you disciplined me. And even though at the time, it seemed painful because of my low tolerance for physical pain. Your discipline made me what I am today. I remember I used to play truant in primary school until that day I came home and saw you and my class teacher in the house by 7 pm. That was the

last day I skipped school until I left primary school.

Mama, I will forever miss you. I inherited so many traits from you. Some people will say we are stubborn, but I will rather say we know what we want, and we will go all out for it. Thankfully, anything we insist on doing almost always ends up in praise. You didn’t want me to go into politics. But I stubbornly refused. I remember that day in 2007 when you cried because policemen invaded my house and’ had to be rescued by the army. But in 2019, you laughed; you said, “now I am the Governor’s mother, and I deserve all the privileges that go with that.”

“Mama, you taught me to love God. Your favourite song was the song about Cain and Abel. You taught me to always bring my best gift to God. You said it is how we can appreciate Him for  His love and protection over us. You were right. I will always hold those thoughts close to my heart.”

“Mama, you are irreplaceable. Someone once said, do not be sad because it had to end. Be happy because it happened. Mama, today, I choose not to be sad because you passed away. I prefer to rejoice because you lived a fulfilled life, and I got to share nearly 53 years of my life with you. I am happy because I will forever treasure the beautiful memories I have of growing up as your son. Even as I write this tribute to you, I have a smile on my face because you died a satisfied woman.”

“Mama Seyi, this tribute is a celebration of your life. Rest in the bosom of our Lord until we meet to part no more. Love,

What I Will Miss Most About My Late Mum – OYO Gov., Engr. SEYI MAKINDE was last modified: December 16th, 2020 by Dare Adeniran

I Like My Dressing To Promote Yoruba Culture – Iyalode TOLANI SALAWU