Home News Which Parenting Style Did You Adopt? It Has Implications On Your Children’s Mental Health
News 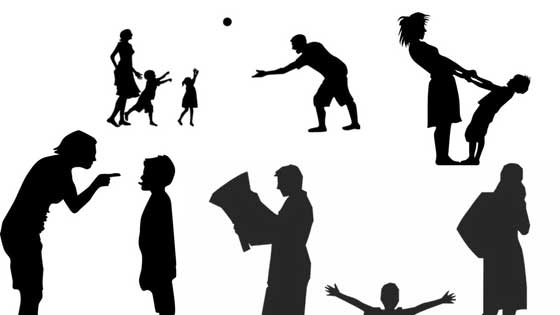 It’s not surprising that a parent-child relationship that’s often filled with fight or neglect would have a harmful effect on kids’ emotional or mental health; but did you know that parenting style may also have an impact on a child’s physical and mental health?

WHAT ARE PARENTING STYLES?

The four basic types of parenting styles defined by psychologists are authoritarian, permissive, authoritative, and uninvolved.

Parents who tend to requeststrict obedience and don’t explain their rules or decisions to children, teens, and youth and punish them without showing much warmth or support are authoritarian. Kids who grow up with authoritarian parents are more likely to be afraid of new situations and suffer from low self-esteem and depression because their opinions aren’t valued.

Authoritarian parents are famous for saying, “Because I said so,” when a child questions the reasons behind a rule. They are not interested in talking and their focus is on obedience.

They also don’t allow children, teens, and youth to get involved in problem-solving challenges or obstacles. Instead, they make the rules and enforce the consequences with little regard for a child’s opinion.

The children, teens, and youth may also become hostile or aggressive. Rather than think about how to do things better in the future, they often focus on the anger they feel toward their parents. Since authoritarian parents are often strict, their children may grow to become good liars in an effort to avoid punishment.

If those statements sound familiar, you might be a permissive parent. Permissive parents are soft. They often only step in when there’s a serious problem.

Parents who are permissive generally don’t discipline, enforce rules, set boundaries or control their children’s’ behavior. Kids whose parents are permissive tend to be irresponsibleand disobey rules and limits, be aggressive, and face a higher risk of alcohol and drug abuse. They are also at a greater risk of depression and anxiety.

Permissive parents are quite forgiving and they assume an attitude of “kids will be kids.” When they do use consequences, they may not make those consequences stick. They might give privileges back if a child, teens or youth begs or they may allow a them to get out of punishment early if he/she promises to be good.

Permissive parents usually take on more of a friend role than a parent role. They often encourage their children to talk with them about their problems, but theyusually don’t put much effort into discouraging poor choices or bad behavior.

Basically, the best of both worlds, this type of parenting involves parents setting rules and limits and giving children, teens, and youth consequences when they do not follow them. Nevertheless, authoritative parents are also emotionally responsive and warm, and make a habit of listening and communicating with their children. Kids whose parents use this style of parenting tend to grow up with better emotional health, social skills, able to adapt to any circumstances, and are more likely to have secure attachments with their parents.

Authoritative parents have rules and they use consequences, but they also take their children’s opinions into account. They confirm their children’s feelings, while also making it clear that the adults are ultimately in charge.

Authoritative parents invest time and energy into preventing behavior problems before they start. They also use positive discipline approaches to strengthen good behavior, like praise and reward systems.

Children, teens, and youth who are raised with authoritative discipline tend to be happy and successful. They’re also more likely to be good at making decisions and evaluating safety risks on their own. Children, teens, and youth who have authoritative parents are most likely to become responsible adults who feel comfortable expressing their opinions.

Do any of these statements sound familiar?

If those statements sound familiar, you might be an uninvolved parent. Uninvolved parents tend to have little knowledge of what their children are doing.

Parents who are uninvolved generally have little communication or involvement with their children, teens and youth. They are not warm and caring to their children, teens, or youth emotional needs, and don’t pay much attention to supervising or disciplining their children. Uninvolved parenting tends to lead to the worst outcomes for children, with kids ending up emotionally withdrawn, anxious, and at greater risk for dangerous and bad behavior as well as drug and alcohol abuse.

there tends to be few rules. Children, teens, and youth may not receive much guidance, nurturing, and parental attention.

Uninvolved parents expect children, teens, and youth to raise themselves. They don’t givemuch time or energy into meeting children’s basic needs. Moreover, uninvolved parents may be neglectful but it’s not always intentional. A parent with mental health issues or alcohol and drug abuse problems, for example, may not be able to care for a child’s physical or emotional needs on a regularbasis.

At other times, uninvolved parents lack knowledge about children development. And sometimes, they’re simply overwhelmed with other problems, like work, paying bills, and managing a household. Children, teens, and youth with uninvolved parents are likely to struggle with self-esteem issues. They tend to perform poorly in school and they also show frequent behavior problems and rank low in happiness.

As with so many things in parenting and in life, moderation is key. The kind of over protectedand over-involved parenting isn’t good for children, teens, and youth because they need to experiment and be independent normally. However, withdrawn parenting, where the parents are not involved in kids’ lives and do not have a strong bond with their children, teens, and youth is clearly not good for their emotional, mental, or even physical development.

According to the Anxiety Disorders Association of America, one in eight children has an anxiety disorder, and neglected cases can lead to academic and social problems, as well as drug and alcohol abuse. Depression is also commonamong teens and youth.  National Institute of Mental Health listed suicide as the sixth leading cause of death for teenagers.

Mental health is more than the mere lack of mental disorders. The positive dimension of mental health is stressed in WHO’s definition of health as contained in its constitution: “Health is a state of complete physical, mental and social well-being and not merely the absence of disease or sickness”.

Research has studiedthe effect of parenting on a number ofresults for children, teens, and youth including behavior problems, mood difficulties, and academic success. In general, studies find that parenting that shows warmth, support, and limit setting is helpful in promoting positive outcomes for youth. Therefore, it is important for parents to develop good relationship with their children, teens, and most especially their youth to eliminate any possibilities of developing mental illness as well as negative thoughts and feelings toward education. Take Care of Yourself and Each Other!

Pinquart, M., &Kauser, R. (2018). Do the associations of parenting styles with behavior problems and academic achievement vary by culture? Results from a meta-analysis. Cultural Diversity and Ethnic Minority Psychology, 24(1), 75-100.

Which Parenting Style Did You Adopt? It Has Implications On Your Children’s Mental Health was last modified: June 25th, 2018 by Nimota Raji-Gambari