Why Deacon ADEWUMI’s Family Members Will Miss Him 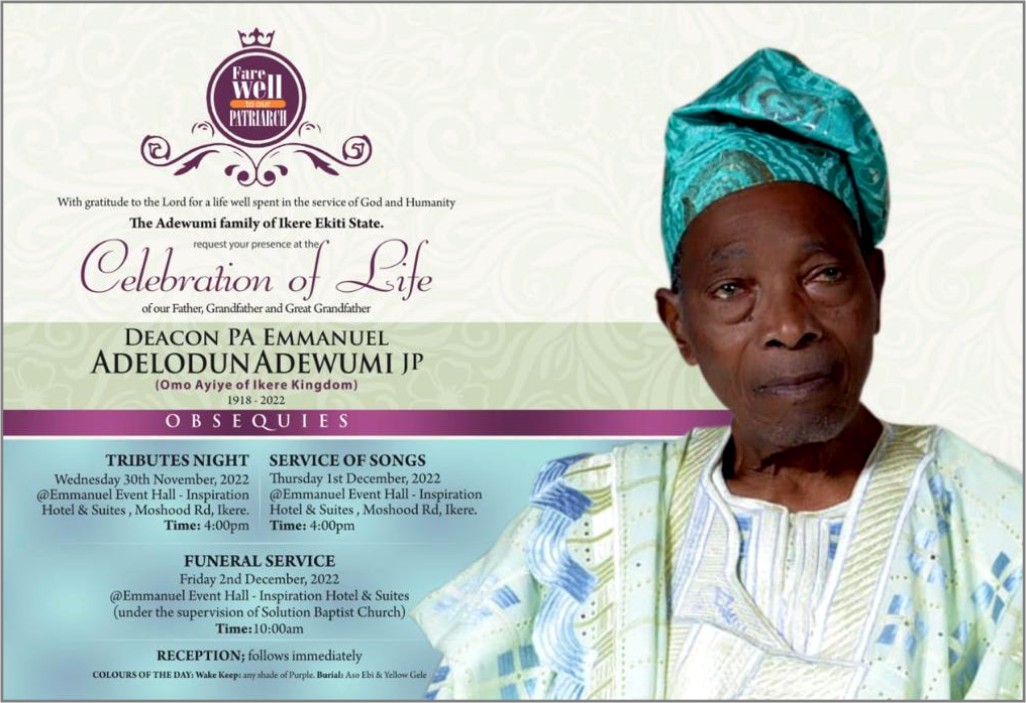 •The Story Of The Illustrious Son Of IKERE Kingdom

It was Farewell to a Patriarch in Ikere Ekiti, last month, as the remains of Deacon Pa. Emmanuel Adelodun Adewumi (JP) was interred. It was indeed a celebration of life as the obsequies of Omo Ayiye of Ikere Kingdom took place from Wednesday, 30th November, 2022 to Friday, 2nd December, 2022.

It began with the Tributes Night that Wednesday at Emmanuel Event Hall, inside Inspiration Hotel & Suites, on Moshood Road, Ikere.

For those 3-days, the burial rites of Pa. Adewumi shut down Ikere. Lets tell you more about him.

Pa, Deacon Emmanuel Adelodun Adewumi was born in July 1918 to the family of late Chief Awokunle Adewumi (Ejimo of kere)and late Mrs Awoshegbe Adewumi. He was the 5th child from a family of 6 children, namely: Adesina, Abraham, Adejoke, Gabriel, Emmanuel and Michael. He was popularly known as FULAN or FILAN, an appellation he earned because of his very light complexion, while some, even including his immediate older sister called him Teacher because being a teacher was a noble and enviable profession in his days.

His father, Chief Awokunle Adewumi, was a hardworking farmer and his mother, was an Akara (bean cake) seller. Young Emmanuel was the only one among his siblings who received a Western education. He rose from a humble background to become a teacher through the divine help of Mama Janet Remilekun (lya Duduyemil, a prominent businesswoman during her time, and one of those who brought the Baptist denomination to lkere Ekiti. Mama Duduyemi, a successful ogi (com paste) seller and the first lyalode of First Baptist Church, lkere Ekiti adopted young Emmanuel and sponsored his education up to Standard Six.

Pa Emmanuel started his teaching career in 1944 at Baptist Primary School Ikere on a salary of 10 pounds and 10 shillings per annum. In 1945, he was transferred to a Baptist School in lkogosi Ekiti. He was again deployed and taught at Esure Baptist School, Esure during the years 1946-1947.

In late 1948, against the wish of his benefactor, he decided to change his career and secured admission to a nursing school in Ogbomosho to train as a nurse. His stay was brief as he was dismissed after a few months for being a fashionista, which was not a strong reason to send anyone out of school. It was believed that his dismissal from nursing school was masterminded by his benefactor Mama Duduyemi who wanted him to start raising a family.

Between 1949 and 1952, he became Headteacher of a Junior Primary School, tro and Afin United. The school was managed together by Ekiti and Akoko provinces. In 1952, he was transferred to a Primary School in lkole Ekiti.

In 1955, he was briefly head of a school under Free Primary Education  at Are Quarters Ikere Ekiti before he was transferred to another school in Isan Ekiti where he remained until 1958

In 1959, he was privileged to head the LA School Afawo Quarters, in his hometown Ikere Ekiti. He was to join active politics within the same year with the sole aim of attracting development to his community. He was a staunch supporter of the late Chief Obafemi Awolowo. Daddy was caught in the crisis between UPGA and NNDP and this led to his transfer to Okemesi Ekiti in 1968 where he was till the end of 1970.

In 1971, he was transferred to Holy Trinity School, Ikere Ekiti where he served until his retirement after years of meritorious service on the 14th of April,1984.

Pa Emmanuel Adelodun Adewumi was not a spectator in life but a major actor both in the lkere Community and in the life of individuals whom he mentored, encouraged and sponsored to succeed. He was a strong father figure piloting many to greater heights. No doubt he left indelible marks in all facets of life. A few of his notable achievements include but not limited to these are: He was the pioneer headmaster of L. A School, Are-lkere. He was the first Baptist son to teach at lkere Baptist Day School, in 1944.

To the glory of God, he built a church, Solution Baptist Church Ikere (formerly Araromi Baptist church) and handed it over to the Nigerian Baptist Convention. We believe this was an act of God and not a coincidence because his adopted mother mama Duduyemi was one of the founders of First Baptist Church, Italeke, Ikere Ekiti.

He was ordained a Deacon at First Baptist Church, Italeke, Ikere Ekiti in the then Ondo Baptist Conference in 1979 by Rev. William S.Jaiyeola. Daddy was among the very first set of Deacons in the church. He was the Sunday School Teacher, even till his old age.

His lifelong ambition to go on a pilgrimage to the Holy Land, Jerusalem was achieved early in the year 2010.

He was honoured by the lkere Ekiti Community with the title of Omo Ayiye of lkere Kingdom (illustrious/Worthy/ Valuable Son of the Land) by his Highness, Oba Samuel Adegboye Akaiyejo, the Late Ogoga of lkere Ekiti.

Daddy was a pillar and foundation member of the lkere Cooperative Society. He was the Secretary of the society for over 20 years. He championed the first transport service in lkere, which translated to lfeloju Transport Service.

He was once Treasurer of, the Rural Health Committee, Ekiti South Local government. Also was a former member of the Primary School Education Committee, Ikere Local Government. As part of his service to his hometown, he was an active member of the Building Committee of Ikere City Hall.

For his uprightness and spirituality, he was presented certificates for reading the Bible all through the year consecutively for seven years, from 2007 to 2013 by Solution Baptist Church. He was the head of the Ejimo Adewumi compound till his death. Deacon Pa Emmanuel Adélodún Adéwumí was a father who loved, cared and provided for his family..

Daddy started trading when he was in Grade III Teacher Training College, importing goods directly from manufacturers abroad to supply his customers. His merchandise included woollen clothes, shirts, bags, shoes, cutleries and many more. He was invited by the manufacturers to the United Kingdom severally but he declined the offers on the ground that he needed to be around to take care of his adored adopted mother Mama Duduyemi. In 1956, he partnered with his friend, the late Mr E.I. Daramola to establish a Temiadara bookshop. Later in 1984 after retirement from teaching, he registered Anu Olu Enterprises Limited, a viable and successful bookshop and stationeries store.

Daddy’s first marriage was blessed with one subscale child. He later got married in 1961 to the late Deaconess Felicia Modupe Adewumi. Their beautiful love story which spanned six decades till death separated them on July 6th, 2021 produced 6 male children. The shock of losing his beloved wife whom he adored was too much for him to bear and barely a year later, the Generalissimo passed on at the ripe and glorious age of 104 years.

Daddy was a disciplined, transparent, fearless, bold, outspoken, firm and trustworthy man. He was a goal-getter who knew, pursued and achieved his life purposes. He built a good enviable name for himself and his generation yet unborn. He lived and enjoyed life under an exemplary grace which he attributed to God Almighty.

We will greatly miss our father. Ikere Ekiti will miss her illustrious son. The Baptist Church will miss a great pillar. Good night Aba Dewumi.

Why Deacon ADEWUMI’s Family Members Will Miss Him was last modified: January 12th, 2023 by City People

Why EKO Club Is Different From Other Social Clubs

How I Took After My Mum, A Petty Trader, In Business