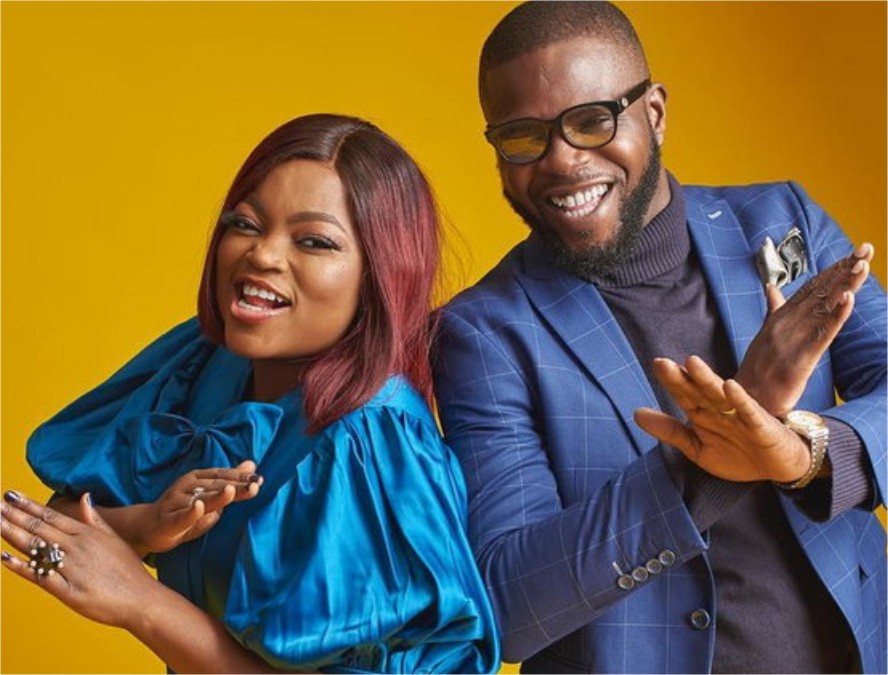 In the last 72 hours, the biggest gist flying around on social media is that of one of the powerful couples in the Showbiz industry, Funke Akindele and her husband, JJC Skillz. The gist has it that the couple has gone their separate ways after being married for 6 years. Precisely, in the early hours of Thursday, June 30th, 2022, the news of this separation hit the Internet. It was the husband, JJC Skillz that announced their breakup on his social media page and a few seconds after, the gist went viral and is still trending as we speak.

The Filmmaker and rapper, JJC Skillz announced the end of his marriage to his wife, Funke Akindele-Bello in June but 2 months ago in April, he denied reports of his marriage crisis. While confirming the new development in a post on his Instagram page. He said the last two years had been extremely difficult for them; He wrote, “Dear Friends and family, I need to let you know that Funke and I have separated. While it lasted, we shared a lot of things together and have created 2 beautiful children. The last two years have been extremely difficult for us.

“I know I have tried my best to fix things, but I believe it is beyond repair now. 3 months ago and at Funke’s insistence, I moved out of the house and apart from AMVCA, I have not been able to get Funke to sit down in an amicable manner to discuss the future of our relationship. “I’m making this announcement so that the public is clear that we both are pursuing separate lives. We still have issues that need to be addressed such as the custody and wellbeing of our children which is paramount as well as business interests which need to be disentangled but I have no doubt that these will be resolved one way or the other.”

Theirs was like having love on a platter of gold. The award-winning actress, Funke Akindele and her husband, JJC Skillz have always been in the news. Their blockbuster comedy sitcom Jenifa’s Diary which is being aired on TV almost every other day also added colour to their prominence. JJC Skillz and Funke might have been married for just a few years but their love story is interesting. They showed signs of compatibility but things have gone sour and the centre can not hold anymore between the couple hence their seperation.

The secret of most successful marriages is ensuring all marital issues are kept as private as possible. The same could not be said for Funke’s marriage with her celebrity spouse, JJC Skillz.

So, how did their marriage hit the rocks? According to City People’s findings, it all started when Funke’s stepson, Benito, called her out on social media and labelled her a wicked woman who is not who the world thinks she is. He also accused Funke of cheating on her husband.  These were the first signals that showed all was not well with the marriage. But the major cracks began to show when Funke Akindele, accused her husband of squandering money without her authorisation as the largest shareholder of Scene One Production company. The couple had a heated argument at their house in Amen Estate, which attracted the attention of neighbours. The argument started after Akindele-Bello discovered that some funds were missing. It was gathered that her husband allegedly used the money to rent an apartment, where his three older children from his previous relationship would stay anytime they come visiting him.

However, he didn’t carry his wife along when he took money to get the apartment. When she got to know about it, she instructed him to leave her house. Before then, Funke Akindele-Bello has allegedly been labelled as an overbearing wife, who takes charge of her marital affairs without giving her husband the chance to be the man. But because of the love he has for her, he has been enduring her excesses. Before they got married, the two agreed that Scene One Production would be a family business with both of them as certified owners and the company would be run by the two of them. But after the marriage, Funke Akindele kept reminding him that the company belongs to her and it hasn’t been good this didn’t go down well with the husband’s side, who worked tirelessly for the company. We also heard that he was told to work extra hard so that he can cater for his older 3 children who depend on him.

Despite Funke and her husband, JJC Skillz trying to mend fences and give the public the impression that all was well in their marriage, her stepson Benito was always coming out to truncate their efforts by revealing more stunning and dirty details of the celebrity couple. Not only did he accuse Funke of having cheated on her husband, but Benito also claimed her husband cheated on her with other women as well. Another reason is while many had celebrated how Funke and JJC joined their talents to establish and run different businesses in the entertainment industry, the duo as speculated in the media, had lots of rough times in managing proceeds from the businesses. They also clashed on who controls what in their various investments.

From movies to music, they both brought out their talent and resources to grow new areas of investment but it seems there are no specific guidelines to protect the interest of both sides. Recall Funke, apart from being a Movie Producer, also launched a music label with the support of her husband, on his side. JJC Skillz delved into his wife’s area of business, one of such is, a TV drama titled, ‘INDUSTREET’. From the above, it is obvious that doing business with one’s spouse might sound interesting but when one goes into it without clear guidelines and rules, it can soon turn into a sour affair. Another possible reason, which could have led to Funke’s marriage break-up is the big issue – alleged infidelity. As stated earlier Funke’s stepson, Benito, had on several occasions dragged his controversial step mum on social media.

Specifically, in an Instagram Live video shared via his page on Friday, May 20th, 2022, Benito revealed several shocking allegations of cheating on the part of the actress and his father, JJC Skillz. The son had hinted to the public of his parents impending dying marriage.

Details shared by the couple’s son suggested that JJC Skillz and Funke were both cheating;  which led to a big fight. But, JJC Skillz dismissed reports of a crisis-prone marriage as he extolled his wife, Funke, whose marriage to him has been blessed with twin sons. Benito said the movie star was known for screaming at the top of her voice in the house. She reportedly accused her husband of stealing money from the family’s account.

Benito said his father and the movie star haven’t slept in the same room for two years. He also revealed that his father no longer lives in their matrimonial home. Rumours of their split gained prominence in April when Benito revealed that all was not well in their home.

The duo dated for a while before they got married in 2016. Theirs was a love story waiting to be heard by everyone, their marriage was envied by many and it seemed life was on a roller coaster for both of them as they vowed to stay together till death do them apart.

What The Igbo People Have Against TINUBU