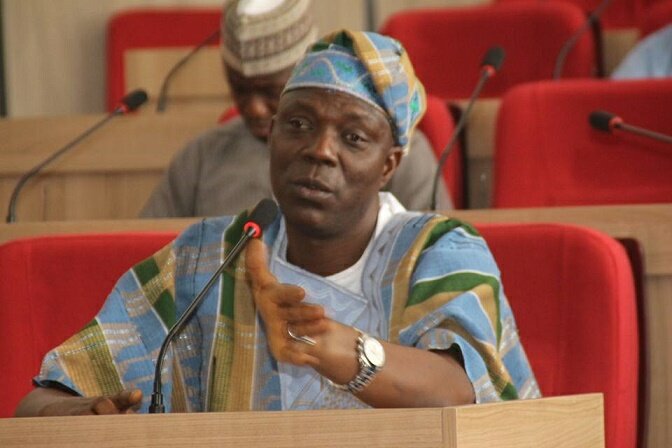 Prince Mathew Kolawole is the Speaker of Kogi State House of Assembly. He represents Kabba/Bunu Constituency. He regards his emergence as  Speaker as a unique privilege and watershed in the political annals of the State. He is a member of the APC,  Kolawole commended, the Commitment and Dedication of his immediate predecessor and pledged his determination and resolve to rally members of the House for a common cause aimed at raising the bar of socio-political and economic development of the state.

Kolawole’s election came following his nomination by Ahmed Mohammed, a member, representing Ankpa 1 Constituency, it was seconded by a member representing Okehi Constituency, Abdulkareem Kekere. He promised to carry all aggrieved members along by delivering good legislation that would ensure a people-driven government.

The incumbent speaker was formerly the House Majority Leader and a staunch supporter of Governor Yahaya Bello. Rt Hon. Kolawole just celebrated his 1 year in office.

You recently  celebrated one year as the speaker of Kogi State House of Assembly. How has it been with all the crises in the State?

Well, let me say that being  the speaker of Kogi State in the last one year, has put me in a leadership position. This position taught me a lot of things outside politics. All I can say is that I thank God for everything. It has not been easy, but God has been helping me.

The second thing I learnt is how to manage success. Achieving success is not as tough  as managing it.  I thank God, my colleagues have been co operating with me in the last 1 year. I thank God for that.

Sir, people know you to be a fashionable man and a successful business man. How have you been able to cope with the two fronts?

My definition for fashion is interesting because I told myself that I wanted to always look good. I have learnt to dress well to make myself happy. I want to look nice for myself; I don’t like wearing what people are wearing. I like to be unique in my style of fashion. I enjoy dressing well and looking good. I believe that that is what I could do for myself as a living soul.

Sir, you are a leader of Kogi West and Senator Dino Melaye is also from the West Senatorial district. There is a row between Senator Melaye and the governor, have you tried to resolve the issue between them?

What is happening in Kogi State is unfortunate, but I can tell you when the matter first cropped up, some of us made efforts to sink their differences I sought opinion of the governor and we  were told that the governor was not fighting the Senator. They were misunderstanding each other. The reason I chose the govern or as my role model is because the man does not fight. It takes time for  him to fight.

A lot of people will come to him and tell him see what Dino is writing about you. He will say leave him alone, when he is tired, he would  come back and we will settle matter.

At that time, efforts were made to appeal to Dino because before now Senator Melaye was my good friend.

He used to come to my house and we would plan things together, but now, we are nothing to Dino. If you called him many times on phone, he would not pick it or call back and you know how painful it is if your call is  not picked.

If you called someone for more that 20 times and he is not picking it, that means you are not important to the person.

I organised a peace movement of all the Obas of Okunland to Lokoja to address the issue between Senator Melaye  and governor Bello and the Obas in their wisdom agreed to step into the issue and the Obas went ahead to organise a press conference at NUJ Secretariat. The traditional rulers promised to resolve the issue.

They went ahead to set up  a 5-men committee and  a first class Oba led the committee to meet the Senator, but unfortunately Dino did not make himself available to them. The Obas went to Abuja, when they got there, he sent someone to them that he was not around. They slept in Abuja. The following day, they went back to see him and they were told that Dino had travelled out of the country to the USA. I believe Dino doesn’t want the matter to be resolved.

What can you say about the crisis going on now  in the  Kogi State  APC?

There is no single party that does no have crisis. There is what we call internal and external crises. What is happening in APC today, I think, is a problem within APC and I believe it would be resolved. People defected from APC to PDP, yes.

It is not the first time, people would change their political parties. The question is what is their motive for defecting? I believe the people defecting are doing it for their personal interest.

Everybody wants to be protected, those people defecting are on their own, and you will see what will happen in the next 2 months. Everybody wants to return to the National Assembly. Most people moving from APC to PDP were earlier from the same party. They decided to go back home because they were there before. The strong people, who started APC, would not move because they saw all the people moving out from APC to PDP as  visitors. And the people also behaved as visitors. Otherwise, how could you build a house and move out of it? I believe after primaries, they would review their positions. You will see after primaries all the people who are now making noise will be silent.

Sir, what legacy would you like to be remembered for?

Big question! The legacy people will remember me for is what I  have done for them. When I became the Speaker, I was able to employ 120 people from my community and across Kogi West and I am paying them salaries every month. I believe those people would never forget me. We have 155 people under a training scheme in Kabba those 155 will never forget me.

I am building 2 hospitals and sinking more than 20 boreholes; also 350 students were given scholarships last year and this year again, we gave 350 students scholarships. We paid NECO fees for 500 candidates. These are the things I want people to remember me for. These are legacy I want to leave. It is good to do good at all time.

Can you introduce yourself?

My name is RT. Hon Prince Mathew Olusola Kolawole. I’m  an indigene of Kabba in Kogi State. I attended OLS Secondary School in Ijede between 1973 to 1978 and I went to Baptist Secondary Commercial School because of lack of fund I was delay for about 3 years.  When I finished my primary education. My secondary education was between 1980 to 1987.

When I finished my secondary education.  I again waited for a fresh 3 years before I went to Kwara State Polytechnic and because of lack of fund. I graduated from Kwara State Polytechnic in 1996 and I went for my NYSC in 1998 and I did my PGD when I was doing my youth service scheme in the same institution. Also, I did my Master’s in Ado Ekiti University and today, I am happy to be one of the members in Kogi State House of Assembly. I contested  the same seat years back and I was stopped by our leaders who appealed to me to step down in 2007 and  I did and I came back to re-contest again in 2015 and I was lucky to win  the seat.

I used to be a hard working business man, who is focused and believed in what I could  do for myself and  not what people would do for me. I always believe in myself at all time. I thank Almighty God for where I am. I was once a supervisory councillor in my local government after my first contest, that was from 2008 to 2011.  I am happily married with 4 kids (2 boys and 2 girls). I am from a family of 6. I was born twins, I lost my twin brother long ago, but others and I  are alive and today I’m an orphan.

How did  you come into politics?

I went into politics as a result of self determination I was doing a lot of things for people that I called charity. I discovered that people who helped me are not from my town or my state. The man, who helped me Engr. Sanni is a Niger State man. He helped me to grow and when I started my business, I helped a lot of people too. I believe in humanitarian gesture. I believe in giving to people because I have seen a lot in life. When I lost my mother, I just thought all what one has is for self.  I’m in politics because I want to do good for people.

Anything you have as a politician is not for you; it is actually for the people. So, that was  what led me to politics. And having worked in the corridor of power before because I have worked in the State House, with the first lady, Stella Obasanjo, for 5 years and have worked in many other places, I sincerely believe that, there is nothing in this life that belongs to man.

Do  you have a  mentor/role model in Kogi Politics?

Hmmm! Before now, I don’t have a godfather and  that really affected me the first time I contested. If I had a godfather that time, things would not have turned out that way they did because I was so popular and acceptable to people. A lot of people came out to campaign for me. I don’t know how to say it, but I was acceptable to my people in Kabba/Bunu.

And in the area, I have two major advantages. My father was from Kabba and my mother was from Bunu and those are the two major districts that make up Kabba/Bunu. So, If I have advantage from both sides, it is good, but absence of godfather, led to my being dropped the first time I contested in 2007. Again, when I contested in 2015 I never had any godfather. Infact, my party then, PDP, had made up their mind to give the position to somebody else because they believed in him and I went into the election and won. Glory to  God. Now, the only person I can refer to as my mentor and role model is the governor of Kogi State Alhaji Yahaya Bello.

Why I chose him is that I came into politics without knowing anybody and I didn’t think that the position I am occupying today would ever be possible. Initially, there was crisis in the House for more than 9 months over leadership. We resolved the crisis and  I maintained my position as the majority leader then.

I know that my seat today is safe. House members would elect those who would represent them and if a  Speaker doesn’t have the cooperation of the executive, he could not achieve anything.

So, the cooperation I have enjoyed from the governor,  since I  took over the speakers seat is tremendous. That was what  made  me to adopt him as my godfather. And so far so good and If you are talking about godfatherism and politics. I can say it to anybody anywhere that the governor is the only godfather I have.

I Dated My Husband For 13 Years Before We Got Married •LAGOS Female Lawmaker, Hon. FUNMI TEJUOSO

MTN Foundation Calls for Entries for the...

Why It Will Be Difficult For JANDOR...