Why I Decided To Join The PDP – OVATION Publisher, DELE MOMODU 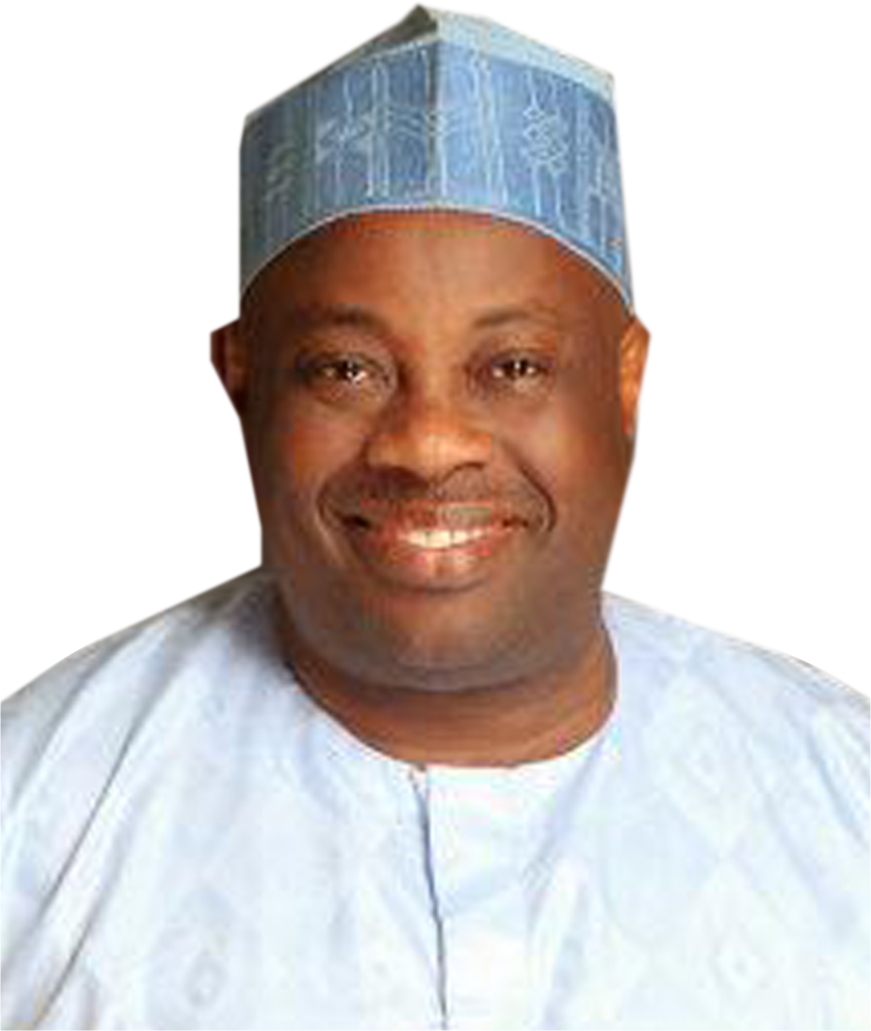 Fellow Nigerians, I know I caught many people unawares yesterday with the sudden announcement of my membership of the leading opposition party, the People’s Democratic Party. It was practically impossible to inform all members of my extended family and many friends of such a monumental decision for several reasons.

I know for a fact that many of our people seriously suffer from the negative spirit of self-doubt. They often judge you by their own standards while I set seemingly impossible goals for myself. It is not my fault but that of my mentors, particularly, The Ooni of Ife Oba Okunade Sijuwade Olubuse II, Chief Moshood Kashimawo Olawale Abiola and the Spirit of Africa, Dr Michael Adeniyi Agbolade Isola Adenuga (aka The Spirit of Africa). These are prodigiously gifted and extraordinarily brave creatures of God who have shattered many myths and superstitions because of their can-do spirit. They were never afraid to walk on roads less traveled. They took their time to plan, prepare and pray and everything else would fall in the right places. It usually did.

There’s nothing I hate more than being discouraged by anyone. I’m incredibly stubborn about my convictions. Chief Abiola taught me that before you can convince others about your decisions, you must first convince yourself. Once I reach that point, I’m ready to take any risk and more often than not, things work in my favour. It is always better to plan something and fail than fail to plan at all. May we never fail.

Anyone who has followed me fastidiously in the last 5 years would definitely have noticed my growing frustrations with the Buhari government. Before attaining power, President Muhammadu Buhari had over-promised heaven and earth but upon getting power, he rapidly began to under-deliver. I had told him during our meeting in 2015 that I was going to be his regular adviser, free of charge, like I did to President Goodluck Jonathan, his predecessor. For about one year, I still gave him a chance or the benefits of doubt. Ill-health also slowed him down.

The first sign of trouble in the Buhari empire was his ill-assorted cabinet members. Except for a few sparkling ones, others were nothing to write home about. Even at the diplomatic level, some of our Ambassadors were abysmally worthless. It was surprising that a man who chased power for so long was not ready to hit the ground running when he eventually collected the power. So I gave up.

For me, the last straw that broke the camel’s back was the unexplainable inability of a retired Major General, and a man with the kind of strong persona President Buhari paraded, to obliterate the terrorists and bandits that litter and populate the forests of Nigeria. And rather than call a spade a spade and do the needful, Buhari preferred to chase shadows, and harass people who did more of thinking and planning with their valuable time. He pounced on the people of South East because of the supposed sin of one man, MAZI NNAMDI KANU! And what’s this sin? The freedom fighter was calling for a referendum which is a peaceful demand for a dignified exit by the Igbo people if they can’t be treated with the respect and equality they deserve in a unified Nigeria. The response of the Federal Government was to kill the flies with sledgehammers. Unknown to Buhari, violence begets violence. Dialogue would have been a better option but such does not exist in Buhari’s lexicon. The only vocabulary he understands is “attack the real and imaginary enemies…”

As if this was not bad enough, Buhari failed to act decisively on the menace of Fulani herdsmen who were destroying farmlands and, worse still, kidnapping, raping and killing innocent Nigerians. Never in the history of Nigeria had we witnessed such wanton destruction of lives and properties. Yet Buhari has not deemed it fit to use the appropriate nomenclature of TERRORISTS on these itinerant and dastardly felons. But he had ample time to unleash his goons on Chief Sunday Adeyemo, aka Igboho Oosa. Those who invaded Adeyemo’s house in the dead of the night left sorrow tears and blood in their wake. Even after Igboho escaped their wrath, they still pursued him to Cotonou where he’s still languishing in indefinite detention without urgent trial. This is the type of selective injustice that has led to the absolute chaos in our country. Never had our country been this divided. This makes me sad. Unknown to Buhari, he has practically turned his people into the enemies of the rest of Nigeria, inadvertently, by seeking to give unnecessary preferential treatment, whereas the Fulani that usually go on rampage are the wanderers who had sauntered into Nigeria from neighboring countries unhindered by our Immigration officers. Some people have alleged that left to Buhari, all Fulani descendants in the world would migrate to Nigeria and remain domiciled here forever.

I really do not know what drives or motivates Buhari, but definitely he has carried his prejudices too far, and beyond normal. I believe the time has come for all opposition parties to get real and join hands to dislodge a Party that has undoubtedly inflicted maximum damage on the country.

I used to think I was done with active politics. I had always worked for individual candidates contesting different positions without joining or being an active member of their respective parties. However, I have come to the clear realization that the parties always pick some of the wrongest and worst candidates, so our responsibilities start from encouraging the parties to seek, screen and process the finest candidates. This will never happen if we leave the process entirely in the hands of hardcore politicians. This is the principal reason I decided to offer the very critical sacrifice of becoming an active politician again. At 61, I’m already speeding towards the retirement age of 65 when most people should be getting ready to return home in peace to their loved ones.

After due consultations with many stakeholders, I knew I was ready to move. Contrary to insinuations that nothing good can come out of the two leading political parties, I can safely confirm that a juxtaposition would reveal that PDP is way ahead of its closest rival. For example, while the Federal Government continues to regale us with some phantom achievements, I have seen real developments in many PDP States. I couldn’t believe the plethora of ongoing projects in Rivers State, for example. I must single out Governor NYESOM WIKE for inspiring me unknowingly to making this move. Former President of the Senate, Dr Abubakar Bukola Saraki treated me to dinner at home on the eve of my declaration and actively encouraged me to go for it.

I spoke to former President Goodluck Jonathan and got his avuncular blessing. Former Governors, James Ibori, Ayodele Peter Fayose, Peter Obi, Seriake Dickson and Donald Duke; former Deputy Governor Yomi Awoniyi, Senators Abiodun Olujimi, Mohammmed Daggash, Ademola Adeleke and Shehu Sani, Hon. Awwal Tukur, Hon. Ahmed Aliyu Wadada, and so many friends have been most wonderful and supportive. They realised that all good hands must be on deck if we are to save Nigeria and prevent this government from plunging the country into the abyss.

I woke up feeling very good and happy yesterday morning and with my best friend, Prince Adedamola Aderemi, we quickly drafted my press release:

“It is with a deep sense of responsibility and commitment to a unified and developed Nigeria that I have decided to re-enter the political arena and join the fray of active politicking again. I have been very frustrated about the state of our country and the manner the ruling party APC has virtually returned and reduced Nigeria to the rubbles of Stone Age. I have decided to stop my perpetual lamentations and join hands with other patriotic Nigerians to rescue our nation from the brink of a calamitous collapse. Therefore, in line with practicing what I have preached for a few years now, I believe that only by joining mainstream politics and becoming a member of one of the leading opposition parties can I hope to make such meaningful difference as I have been demanding of others.

I have consulted widely. And it is clear to me that given the dangerous and disastrous drift that our Nation has experienced in the past six years, the only Party from which amends can be made to rectify our situation is the Peoples Democratic Party (PDP). This accords with my vehement opposition to the policies and practices of the All Progressive Congress (APC) and its leadership, which has denuded our country of everything we hold dear – National Unity, Cohesion, Security, Economic prosperity, Educational advancement, Social infrastructure, and above all, our cherished moral values.

“For these reasons, I am happy to declare that I am now a full-fledged participating member of the great and patriotic Peoples Democratic Party.

It is deeply saddening and regrettable that some of the biggest and landmark achievements recorded under the PDP administration have been diluted, wasted or diminished by the present APC Government. I offer my sincere apologies on the role some of us played in 2015 in bringing President Muhammadu Buhari to power.

I wish to salute the resoluteness and steadfastness of PDP members in staying strong despite the challenges being faced at all levels. I resolve to join the Party, its leadership and other members in redoubling our efforts to making Nigeria the giant of Africa it was once reputed to be. I wish to thank the leadership of my party, PDP, for fully accepting me with love and enthusiasm. I intend to serve Nigeria from within the PDP with all humility, purpose, vigour and sincerity in whatever role the Party and God deem fit for me.

Since then, social media has been on fire. My declaration for PDP went viral within minutes and continues to trend.

I must emphasise that my membership of the PDP is not about position, but about the regeneration and rebuilding of the nation by those who matter. The silent patriots and youths who have been relegated to the sidelines. I have taken this bold step to encourage and motivate others.

My first task was to visit my great leader, the grassroots mobilizer, Chief Dan Orbih, a National Vice Chairman of the Party, who received me at home and reintroduced me to all the PDP Chairmen in Edo State and particularly my Local Government. I can’t thank him enough for reuniting me with my people. I also visited the PDP National Secretariat where I was warmly received by the respected Acting Chairman, Elder Yemi Akinwonmi.

Many youths have responded massively and the PDP website is already on fire with Nigerians from everywhere registering online. The rave is now #IamPDP.

I believe that the revolution to unite, secure and develop Nigeria has started in earnest.

Why I Decided To Join The PDP – OVATION Publisher, DELE MOMODU was last modified: November 1st, 2021 by City People