‘Why I don’t like Obasanjo’, Prof Wole Soyinka reveals in new book 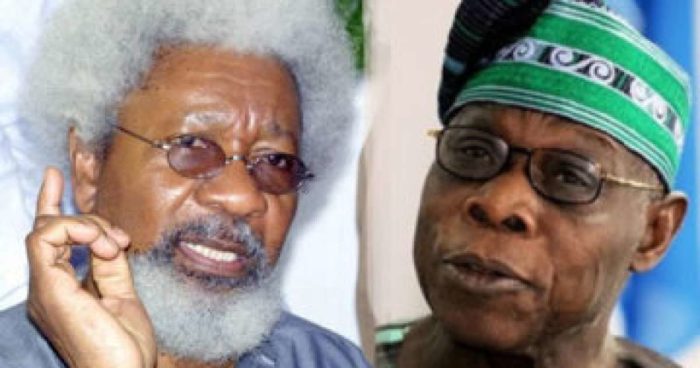 The age-long rift between the two Egba sons; Nobel laureate, Wole Soyinka, and former president Olusegun Obasanjo is an open secret which gets everyone wondering if there will ever be an end to the rift, as the former has released a new book to literarily decimate “the aspiring mongoose” as he described OBJ in the fifth page of his new book.

The book, Quis Custodiet Ipsos Custodes? (Which means “Who keeps watch over the watchmen?”), portrays Baba Obasanjo on the cover page as a three-faced statesman with conflicting personality, taking him to the cleaners with facts and evidence of impunity, negligence, and arrogance throughout his cumulative 12 years of administration as a military and civilian president. One gets to wonder why a Nobel Laureate should make an entire publication to slam one single person if not for resentment and disdain.

In the 148-page publication, which is billed for launching on Thursday, August 1, 2018, Prof Wole took the former president to the cleaners in a systemic sequence of his (OBJ) time as a military leader and civilian president, stating that Obasanjo is equally guilty of all the “Sins” he is placarding against President Mohammadu Buhari.

“Some national leaders, once they have left office, believe that their life task is over. We must never fail to express gratitude for the exceptions. Outstanding among such exceptions is an ex-president, who having accurately gauged the swell of public discontent, took up his pen and, in characteristic style, indicted a government that had fallen below expected performance.”

He would later refer OBJ’s letter as a pre-emptive coup designed to take over and control a potential tidal wave, channel it into safe, familiar backwaters where it can be overseen by jaded, recycled, self-designated protectors of the realm.
Prof also reacted to Baba’a perception of him in volume three of “My Watch” tagging Prof as a desperate social critic who aims to “outdo” Gani Fawehinmi and Femi Falana. He said “I asked this to be taken into consideration also for all remarks directed against this speaker in that 3-volume compendium of revering narratives titled: My Watch.

“How ironic to find our letter-writer among the current choir of lamentations over alleged selective targeting by the corruption-busting agencies! Those who wish to deny his own record in this respect are respectfully directed to revisit open interventions by individuals such as General Ishola Williams, as well as Colonel Umar…” he stated.

Obasanjo never fails – even as recently as the 10th anniversary of the creation of his presidential Laundromat early this year to accuse me of blocking his ambitions to become Secretary General of the United Nations. Well then, regarding that episode that still nettles the Watchman, could someone please persuade him to stop crediting me with that level of international clout? Of course, I feel totally content and fulfilled with my contribution to that operation to ‘Save the world’ from the clutches of a predator, sadist, and liar –convincing evidence.

Prof Wole Soyinka mentioned a lot of atrocities allegedly committed by former presidents with evidence of facts and figures; varying from the diversion of Orji Uzo Kalu’s cheque, the assassination of Harry Marshal and Arthur Dikibo kidnapping of the then Anambra State governor, Chris Ngige under his watch, and lots more.

The book is billed for launching at the Freedom Park in Lagos on Thursday, August 2, 2018.

‘Why I don’t like Obasanjo’, Prof Wole Soyinka reveals in new book was last modified: August 1st, 2018 by Reporter

Saraki’s exit is a great relief to APC – FG