Why I Gave OGOGO A Car As Birthday Gift – LAGOS East Senator, YAYI 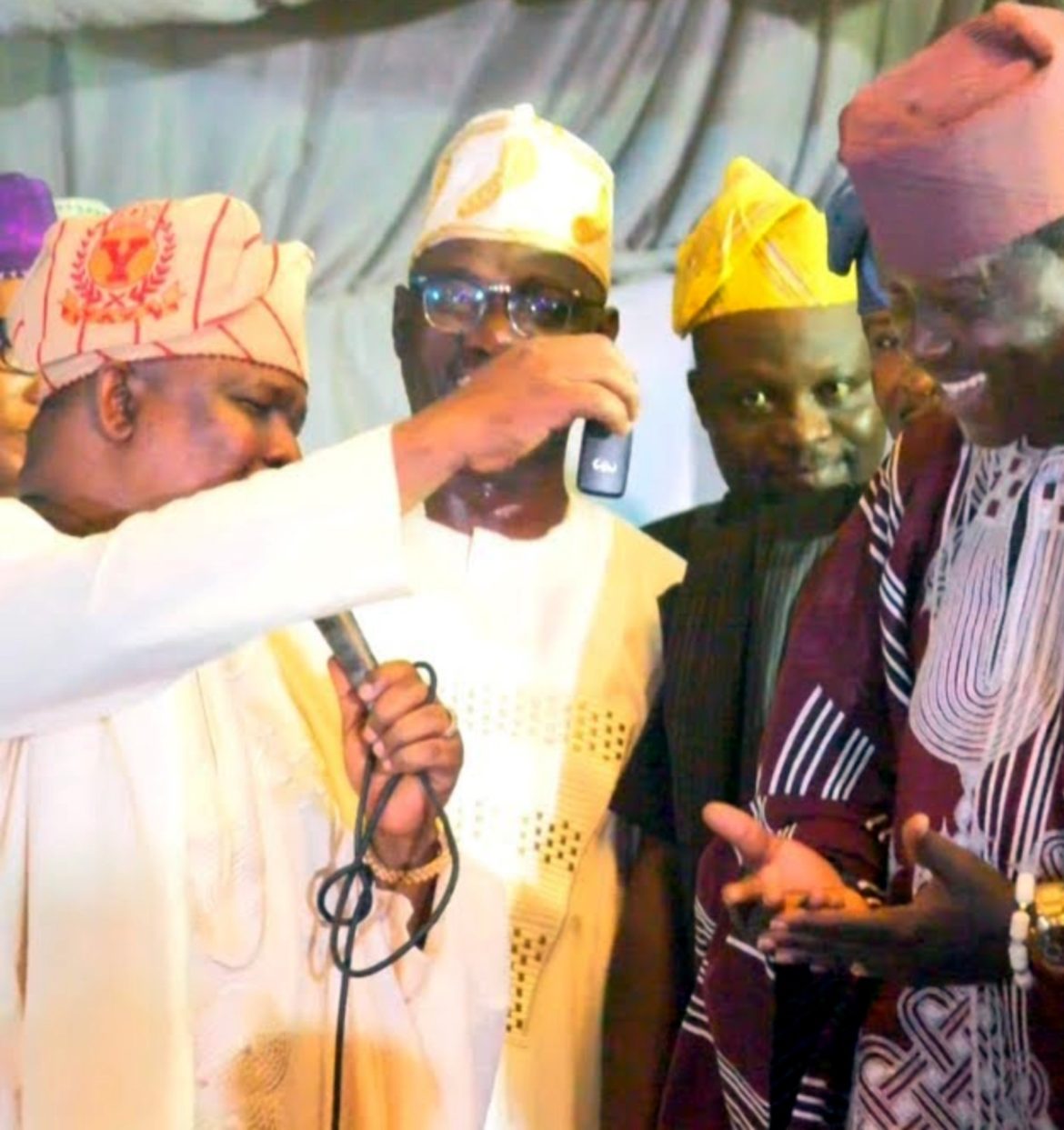 At the recent 60th birthday party for movie icon, Taiwo Hassan, popularly called Ogogo, Lagos East Senator Solomon Olamilekan Adeola, popularly called Yayi, played a very prominent role. This handsome Senator is one of the most celebrated politicians in Lagos.  Many don’t know he is a philanthropist per excellence. When he appears at any event, people rally round him. He is a man of the people. Many of his good works are evident in his constituency and are speaking for him.

As a 2-term Senator, Sen. Yayi has carved a niche for himself in politics and he has won the heart of many to his side through his generosity. Just in case you are reading about him for the first time, let us quickly tell you more about the man called Yayi. This 50-year-old politician, Yayi was born at Lagos Island Maternity Hospital, to Mr. Ayinde Adeola Ogunleye and Madam Abeni Olasunbo Ogunleye (nee Akinola). He is from Yewa, but he grew up in the Alimosho area of Lagos.

Sen. Yayi is a distinguished son of Ago-Isaga, Pahayi, Ilaro, Yewa South Local Government area of Ogun State. He grew through self-development. He began his formal education at State Primary School in Alimosho, Lagos and proceeded to Community Grammar School Akowonjo, Lagos for his Secondary School Education. He subsequently proceeded to the prestigious Ondo State Polytechnic Owo, now Rufus Giwa Polytechnic, Ondo State, where he bagged a Higher National Diploma in Accounting (H.N.D). And out of personal zeal to excels, Sen. Solomon Olamilekan Adeola got enrolled for his professional courses while in school, becoming a Chartered Accountant at a very young age. He is a distinguished member of the Association of Accounting Technicians (AAT) and also an Associate Chartered Member (ACA) of the Institute of Chartered Accountants of Nigeria (ICAN).

He started his professional career as a junior staff with The Guardian Newspaper Limited, where he worked for 12 years and rose to the position of the Accountant. He later proceeded to Olatunji Omoyemi and Company: a Chartered Accounting Firm, where he led the audit team for several years before he was then promoted to the position of a Senior Auditor.

Following his decision to join active politics, at the dawn of the 4th Republic, Adeola was nominated and won the primaries of the then ruling ACN, Action Congress of Nigeria and was elected member to represent Alimosho State Constituency 2 at the Lagos State House of Assembly from 2003 to 2007 and again from 2007 to 2011. He was instrumental to the enactment of the law that strengthened the Lagos State Internal Revenue Service, legislation that catapulted the revenue of the state from N5 billion monthly to over N20 billion. He was also part of the team that passed the Fiscal Responsibility Act and the Public Procurement Act of Lagos State. He was elected to the Federal Legislature to represent Alimosho Federal Constituency at the Nigerian House of Representatives in 2011. And when the committees of the House were inaugurated by the Speaker, Rt. Hon. Aminu Tambuwal for members, he got the position of the Chairman of the only constitutional committee, the Public Accounts Committee of the House. He got the post as a first time member of the House.

City People Assistant Editor/Head of City People Tv, SUNDAY ADIGUN, had an interview with him and he spoke about the grace of God he has enjoyed since his involvement in politics, 24 years ago. Excerpts.

How best can you describe Alhaji Hassan Ogogo?

Ogogo is a good man. He’s well celebrated all over the world. He’s a distinguished Nigerian, who has done so much in his own field which he has chosen i.e the theater act. Ogogo has made his mark. He has done so much that he deserves to be recognized, especially for what he has done for the theatre art in this country. I’m equally saying this, Ogogo is a compassionate human being, and he’s a nice man. He can go out of his way to do anything for anybody, most especially when he believes in what he’s doing. I must tell you this, this is just the beginning of good things to come and to happen to Ogogo. I am here to appreciate him. I thank God for his life, for all he has done, for the good things he has done. For his contribution to the development of the human race, for those who have benefitted from him in one or the other. So, I’m here to thank, to congratulate and to celebrate with him, and that is why is evidently shown for what we are seeing on the ground, that he’s a well-celebrated person. Aside from being a celebrity, Ogogo himself is a man to be celebrated. So I’m here to rejoice with him on his 60th birthday anniversary.

You are a man of honour. People love you around them and you’ve been seen on several occasions celebrating people that are close to you, what really informed the kind of person you are, and if I may ask how life has been as a Senator?

I’m just my normal self, Olamilekan Adeola. I enjoy what I’m doing. I celebrate people. I believe the position I am today is God, not man. And God has been so merciful and so kind to me. I must not also forget the input of many people, their contribution towards where I am today, so it’s my obligation to reciprocate, by ensuring that I reach out to people, celebrate them, and as well thank God for my life for what he has done. Everything I’m doing, attending people’s event, celebrating people, giving people gifts, money is just my own way of saying thank you God for what you have done for me.

It’s been great. It’s been wonderful. 24 years down the line, and still counting. I give God all the glory.

Yes! 24 years. I’ve been actively involved in politics for the past 24 good years. I’ve been Members of State of Assembly, House of Reps and 2-times Senator of the Federal Republic of Nigeria. So it’s been God. I’ve seen a lot. I’ve experienced a lot, but in all, I give God all the glory for what He has done.

What more are we expecting from the powerful YAYI?

For now, nothing much than the people to pray for me, that whatever area or the next destination God is taking me to, that I’m watching, I’m looking, I’m praying and hoping that it can only be God. It’s not a man that will do it. So, the next level or whatever you expect from me, all depends on God. It’s what God wants for me that I will want. One with God is a majority. I want to believe the next direction will only be guided and be directed by God.

READ ALSO: MANY DON’T KNOW I AM FROM A STRONG MUSLIM FAMILY – 1ST BANK CHAIRPERSON, IBUKUN AWOSIKA TELLS HER STORY

Many Don’t Know I Am From A Strong Muslim Family – 1st Bank Chairperson, IBUKUN AWOSIKA Tells Her Story