Why I Had A Secret Wedding 7 Months Ago – SOTAYO 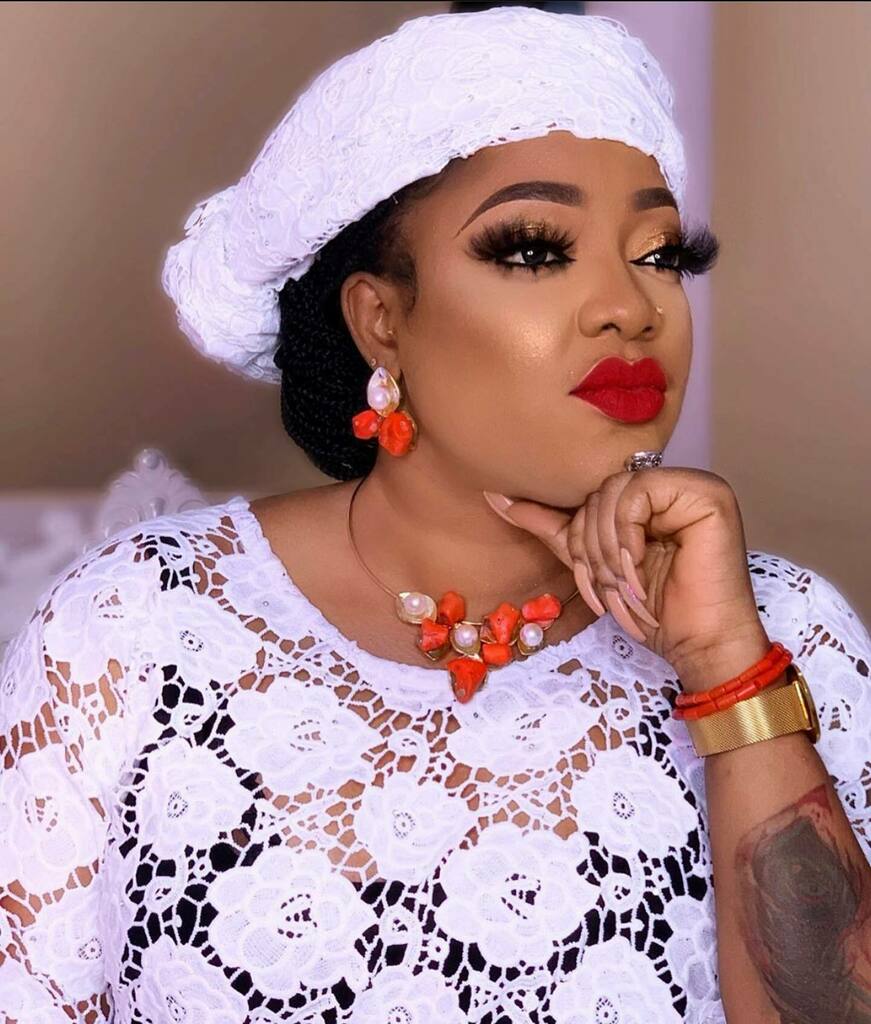 A Few weeks ago, Star Actress, Tayo Sobola, popularly called Sotayo Gaga, joined the list of celebrities who have walked down the aisle with their hearthrobs. Unknown to many, she had a secret wedding and kept the event away from the prying eyes of the public, including her colleagues in the industry 7 months ago.

Social media was agog to hear about the wedding when the pretty actress posted photos of herself in a white bridal gown and thanked her make-up artistes and bridal vendor for making her look stunning.

In her post, “Okay, this is not today. I only just decided to post it today. Thanks everyone for the messages and prayers. God bless you. @tshakky x @lacharisnigeria and @hairbysleame thanks a million.”

Many of her colleagues in the movie industry wished her well and also celebrated her on their respective social media pages. The likes of popular actors, Odunlade Adekola, Mercy Aigbe, Toyin Adewale, Wumi Toriola, Yetunde Bakere and host of others felicitated with her.

However, some industry insiders claimed it may be a hoax and that the actress may not have gotten married after all since Sotayo is naturally playful. At that time every attempt to get her to respond proved abortive, as several calls put through to the actress were not answered.

But on Sunday March, 2021, the beautiful actress, Sotayo unveiled her new collection at the prestigious Radisson Blu, tagged “Fashion/Media Exhibition for CLEANSTITCHES, an event strictly for the media, while answering different questions from the media, the big question popped up on why she kept her marriage secret.

Her response, “For those that know me very well, I mean those that are very close to me will tell you that I’m one person that likes my privacy. I love and respect my personal life a lot. Aside that, it was a mutual agreement between my husband and I to keep it a secret. I’ve been with my husband for the past 7years. Yes, we just got married but it wasn’t anyway close to the day I posted it online. I know my husband and my husband knows me, so let’s leave it like that. Many times, I’ll read funny stories online. I’ll read so many comments and be like, where is this coming from? (Laughs).

Tayo Sobola is an indigene of Ogun State. Her late mother was a Muslim while her late father was a Christian. She has 2 degrees; she has a diploma in Law from Lagos State University and a degree in Public Administration from Olabisi Onabanjo University. While in school, actor Emeka Okoro introduced her to the Actors Guild of Nigeria. She started her career in the entertainment industry as a model before she became a video vixen in music videos and also presenting.

She started acting in English movies before Yoruba movies but now she juggles both. She is also a movie producer as she produced two popular movies, Corper Jide and Arewa Onijogbon. She has featured in some movies like Idakeji Ife, Egan, Corper Jide, Bella, Arewa Onijogbon among others. In 2015, she won City People’s Entertainment Awards for Best New Yoruba Actress Of The Year and was nominated in another category for Most Promising Actress Of The Year.

She owns a multi-million-naira production studio in Lagos launched in 2015. She launched her fashion line called ‘Clean stitches’ and her cosmetics line in 2018. She also signed an endorsement deal worth millions with Glee Stores in 2018 and Candyz Travel and Tours in 2019.

Why I Had A Secret Wedding 7 Months Ago – SOTAYO was last modified: April 5th, 2021 by Sunday Adigun