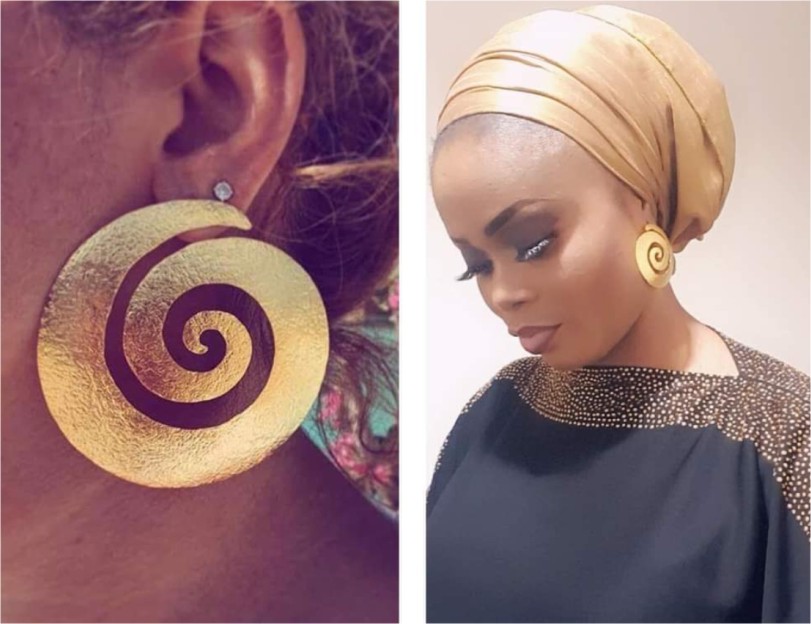 •The Story Of A LONDON-Based Jewellery Merchant

In London, many Naija babes go for their Jewellery at Chic n Classy Jewellers. The business is owned by Bunmi Omabuwa, a very beautiful Jeweller. This lovely lady is well known. Many of those who have never met her know her name which she sometimes spells as Bummie. She is not only beautiful, she is stylish and fashionable. She is also trendy in her style. Of course, she is very sociable. She works hard and plays her. She is a Jewellery merchant who sells  Gold to many women in London and Lagos. She is the CEO of Chic n classy Jewellers. Though she is London based, she has a lot of Customers in Naija. “We make you rock the Gems and would make you stand out in our exquisite pieces”. The face of her Jewellery brand is Abike Jagaban, her friend of many years. Abike is a fashion designer, who owns a shop in Lagos & London. “She’s got a good face and figure to push the brand.” Bunmi explains.

Bunmi Omabuwa has her group of friends she rolls with. She is friends with so many equally popular ladies in London. They like her because she is dependable and loyal. Loyalty is key to her.

She used to live in Nigeria before she relocated many years ago. But she still frequents Nigeria whenever her friends have events & parties. She still visits Nigeria during the Xmas/New  Year period when some of her friends have celebrations in Nigeria. One of them Khadijat, Lola Pepe, an equally popular London-based lady was getting married after dating her husband to be for a few years. Bunmi was one of those who planned the Nigerian party from her London-based friend. She was one of the key organisers. She and Lola are like 5 & 6. They are close. All through November & December, she was pre-occupied with preparations. And thank God, the party was hugely successful. Over 100 London-based ladies stormed Lagos for the party. King Sunny Ade thrilled guests.

Bunmi Omabuwa returned to London later in January after spending about 2 to 3 weeks in Lagos. She was to return to Lagos in March for Otunba Shade Adesoye’s daughter wedding. Though she has lived in London for years, she does not forget her Nigerian roots. She has her pedigree here. She has family members.

One other thing that has made her to be very popular in London is also her love for Fashion & Beauty. She is one of the best-dressed ladies in London. She is pretty no doubt. She is blessed with good looks and a figure that is attractive with a flawless skin that glows. She loves to scintillate with her dressing. She mostly looks sexy. She loves tattoos.

She is a  member of a white garment church in London. And she always looks stylish in her sutanas. Anytime she dresses up to go to church on Sundays she always looks royal. She wears the best sutana’s and she complements her outfits with classy jewellery that enhance her dressing.

She also loves to dance. She is a good dresser. In church and at parties she is forever ready to dance. Many of her friends say they like her because she has a good heart and she is nice. They explain that in her own little was, she has touched hearts and has helped a lot of younger people. That is why many younger ladies love her and see her as role model. They like her success story. They want to be like her.

Why did she go into Jewellery business? She says she does jewellery more because ladies need exquisite jewellery. They also need unusual pieces. I sell fabrics too. But more of the costume jewellery and 18 karat Gold. I have been selling for over 14 yrs”.

Why I Made ABIKE JAGABAN The Face Of My Business – BUNMI OMABUWA was last modified: October 20th, 2020 by City People