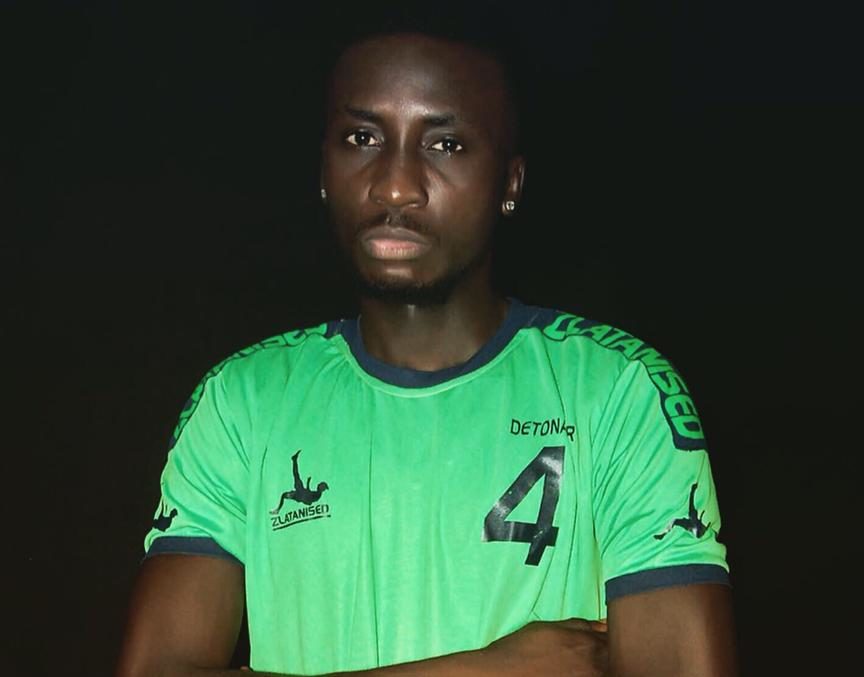 ORIYOMI ADEBAYO is a young, vibrant and super talented young Nigerian. Born on 3rd of September 2001 in Lagos Nigeria, Oriyomi hails from Kwara state, North Central area of Nigeria. He is a dynamic footballer who enjoys playing a defensive midfield role and currently plies his trade with Femmak football Club in Lagos.

Let’s also tell you that Oriyomi Adebayo is not just a footballer but also an entrepreneur per excellence. He started a brand called Zlatanised Wears in 2019 where he produces Sports Wears just to improve his footballing structure and training kids in his neighbourhood because anything football is what he knows how to do best.

The fast-rising midfield maestro who also doubles as a lover of kids has been making impacts in his small circle by training young footballers (both males and females who aspire to be future stars in Nigeria and beyond.

He has also introduced a League among grassroots teams called The Zlatanised Super League. A platform meant for children and young adults to express their football skills and also sell themselves to the world at large.

Oriyomi Adebayo is passionate about seeing children who are hopeless make a living out of life, he desires to see children go off the street and he is using sports especially football to achieve this. He has set up Zlatanised Football Academy where he schools young children and teenagers the nitty-gritty and football basics for starters.

City People Sports crew met with him and were amazed at what he has done so far. He had a brief chat with the City People Team and below are excerpts for your reading pleasure.

Tell us how the football academy started. What inspired you to set up the academy?

It started with the little boys that watch me play because they always tell me they want to be like me, that’s why I decided to start training them. I’ve been playing football since I was a kid on the streets, going to viewing centres to watch my idols play so I know how it feels as a kid that really wants to play football at the highest stage. Achieving my dreams is something many people like me didn’t have. So I love to help the kids around me also achieve their dreams. I know what many talented players go through and yet they still don’t get to the limelight. This is because our system has a way of killing the dreams of children. I have decided to be a light for them and I pray that they will all shine. Another thing that inspired me is the fact that I hate seeing kids and youths being used for social vices. Sports is a way of engaging and developing the minds of these young chaps. So, I have decided to use what I have in my little capacity to better the lives of some children. I prefer to take steps in tackling problems instead of sitting down and blaming the government or society. That is exactly what I am doing right now.

It’s from my idol, Zlatan Ibrahimovic, so I decided to add ‘ised’ then super league to make it look compact. Zlatan is a football hero who has played in almost all the major leagues and won many accolades. His confidence, ability to express himself and skills are what I also admire as a footballer. I have always loved him from my childhood so I am building my dream around his name.

Why are you investing in grassroots football?

So as to get the players the opportunity I didn’t get, though, I’m still an active footballer. Playing grassroots football and getting the right exposure is something that doesn’t come easy in Nigeria. With Zlatanised Super League, children and adolescents will have the opportunity to express themselves. In those days when Nigeria used to be a force to reckon with in the world of football, there were many local amateur competitions in place and our league was producing top-class players like Segun Odegbami, Christian Chukwu, Alloy Agu, Thunder Balogun, Rashidi Yekini and a host of others. They all plied their trade in the country. That is why I am investing in grassroots football again. Someday in the future, an alumnus of Zlatanised Super League will win Ballon d’Or.

How does the football academy run?

We help to improve the players physically and mentally to be well prepared for the future, and we have our training on Monday, Wednesday, Friday and Saturday. Aside physical training, we also provide basic football education for starters. Research has shown that why the white seems to be better than us is not because they are more talented but simply because they have some basic technical knowledge that we lack. So at Zlatanised football academy, we provide these technicalities for starters. Once a talented player gets the right basic footballing techniques, the application will not be difficult. Just as we know that football is a combination skill, strength, power and techniques, a complete footballer must possess all and those are the kind of stars we are breeding here.

What do the participants of this league stand to get?

At the end of the league, the winners have some incentives which include cash rewards, a season jersey products, trial opportunities, meeting scouts and a whole lots more that are yet to be revealed.

Running a football academy and hosting league matches can be capital intensive. How do you raise funds to run these projects?

We have been speaking to many corporate organisations for sponsorship. Some have agreed to partner with us but the number we have at hand is far from what we need. So we are using this opportunity to call on to as many organisations as possible to join us in this race of reshaping the minds of our young ones and rebranding football in Nigeria and I am certain that every penny spent on this project will be worth it at the end of the day.

Who can participate in the Zlatanised Super League?

Both male and female teams can participate, only Lagos based teams, for now, the team must have a permanent home ground because it will be played at home and away.

Football academy requires professional resource persons to cater to the needs of the lads. Ranging from coaches to Medical personal. Tells us about some of the experts you have in the academy faculty.

For now, we don’t have experts in most areas, because we just started and are still looking for more players, that’s why we need sponsors to get kits and equipment. By the time we are fully launched, everything needed for a football academy to thrive will be in place. I know a few experts that are already willing to partner with me and make this dream bigger than what it is. However, we are starting small and as time rolls by, we shall get there.

How do you intend to help those who have done well in the academy get the chance to ply their trade in Europe and other to Nigerian clubs?

There are many scouting programs across the country we have identified and will be taking our players to, in addition to that, we have contacts with ex-internationals who are into football agency and management, they can get deals for talented players in the league both home and abroad. And because they have been players before they ventured into this business, it is much easier for them to strike the right deals for young players where all the parties involved will be happy.