Why I Turned Down Jobs Offers From My Parents For Acting 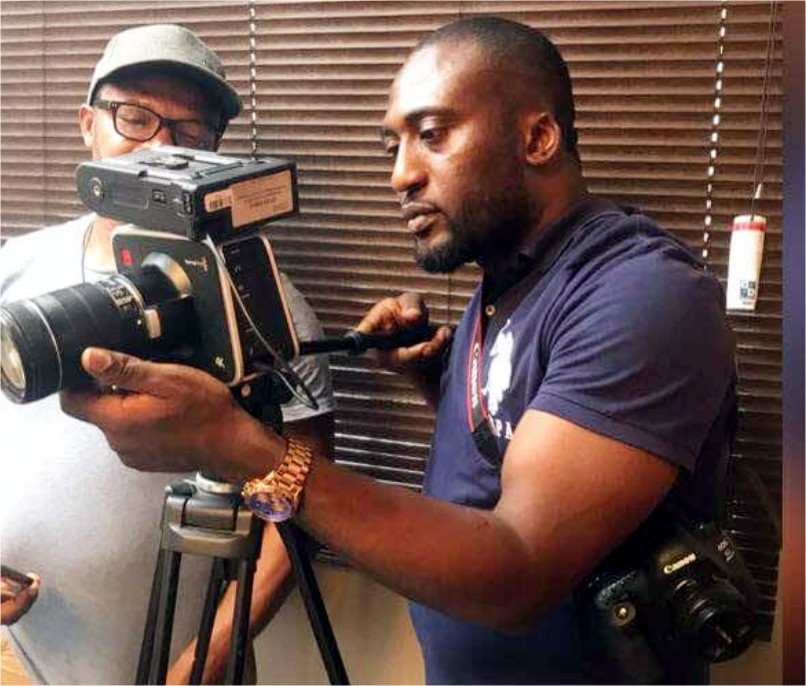 You can’t help but like Ayodeji Tomoye when you meet him. He is a multi-talented young man with an intense desire to excel in everything he lays his hands on. He is an actor, a filmmaker and a production equipment entrepreneur. Right now, he is regarded as one of the fastest-rising movie producers in the country having been behind the production of some successful flicks. He spoke to  City People’s Tunji Fayemi about his exploits so far in the industry. Enjoy excerpts.

Tell us a bit about your background, where are you from and where did you grow up?

My name is Ayodeji Tomoye Aka Dejavu the CEO of DEJATOM FILM PRODUCTION, am a film maker also one of the upcoming movie actors and film producer that is making waves in the movie industry. Am a native of Idoani under Ose Local Government in Ondo State. I graduated from Adekunle Ajasin University former Ondo State University, I obtained BA English Communication. I have been in the movie industry two decades ago and trained under Action group theatre. I grew up in Ketu, Lagos State then later moved down with my parents to Mowe in Ogun State. I am happily and legally married with kids.

What were you doing before you got into acting?

I started acting at a very tender age in the children drama group in my church and also I headed the theatre group in my primary and secondary school days and since then I watched some of my role model actors and actresses then that really influenced the decision of going into filmmaking. My first experience was at Aramson production in Ikeja. I went for practicing and rehearsal on a daily basis due to the passion that I have for acting and believed that there is brighter prospect ahead before I gained admission into the university.

When did you start your movie career?

I started my movie career in 1996. Funny enough, my first movie titled ONIROYIN that brought me to the limelight was released in 2012. It talked about a young boy that had passion for journalism as a career.The film, Oniroyin that I played the lead role was produced by me also. In my first film I featured Kelvin Ikeduba, Racheal Oniga of blessed memory, Mosun Filani, Aina Gold Sisi Quadri, Ose ose Omo Banke and so on and it was directed by Isiaka Arogundade aka Maweku. I shot part of the scene in Mowe in Ogun State and Lagos State which cost me 1.5 million naira then. My parents and friends both home and abroad started calling me Dejavu Subomi Oniroyin and also advised me to put more efforts in the movie theatre.

Who were the movie icons you were looking up to at the time you were coming into the industry?

My movie icons then that I was looking upto were Kelvin Ikeduba, Nicholas Cage, Pete Edochie, Ibrahim Chatta, Desmond Elliot, Odunlade Adekola, Adebayo Salami Alhaji Pasuma Wonder and so on.

How did you come across your company name DEJATOM and crew?

Well as I have said earlier, my nickname is Dejavu. When I wanted to register the name Dejavu as my brand name I was told that it has been used then I decided to use three first letters in my surname to back it up as my brand name DEJATOM film production. We are into supervising film projects, documentaries, movies, commercials, event coverage and most importantly we rent various kinds of filming equipment, light, camera and sounds. We engaged five staff members as Director, head of operation and his assistant, professional photographer and editor. They do the production proper and I may decide to work with them either as an actor or script writer to post production, they decided to work with me as a young and multi-talented film maker in the industry with exposure and experience.

Can you share with us some of the big names you have acted with and what you learned from them?

I featured with Odunlade Adekola in various movies both English and Yoruba such as Temisire, Taniolorun? Olorun Lologun which was the first movie that Odunlade acted as an Igbo man, Irawomeji. I acted with Alhaji Wasiu Alabi Pasuma, Madam Lola Idije, Kola Oyewo, Mosun Filani, Kelvin Ikeduba, Sisi Quadri, late Racheal Oniga who also worked with me in my first movie Oniroyin. And I also learned from them to be proactive in whatever we are doing, humanity and perseverance is the key to success.

Share with us some of the projects your outfit has handled?

To God be the glory as the CEO of DEJATOM Production we have worked for Ondo State government on a documentary during the Corona virus era in year 2020 which was very tedious work but we succeeded to interview patients of Covid 19 in their Isolation Centre under the present regime of his Excellency Gov. RotimiAkeredolu. I had to put on personal protection materials and it was a great success.

Moreso, we also covered an event under the same State Governor on a programme tagged Redemption concert to unite the youth in Ondo State. Dejatom production worked with many great artists that came to grace the concert such as Mayorkun, Zlatan, 9ice, Lafemin and Seyi law anchored the event.

We also worked with an NGO in Abuja tagged SECURE THE FUTURE INITIATIVE ON MENTAL HEALTH to educate the youth around not to die of depression, frustration, drug abuse and so on, it was a successful outing. we also interviewed the young hook up girls in Abuja.

We also understand you rent out various filming equipment, how profitable has this been and what are the major challenges you have had to deal with along the way?

Firstly, I had an encounter with my parents after I graduated from the university. They had secured a job for me in one of the commercial banks and my mum also secured another job for me at Federal Government parastatal then but I declined both offers because I had decided not to work under any corporate organization and government owned establishment. It was a tug of war then I had a break in 2013 and travelled to south Africa to work with an Advertising company as a content writer and later furthered my study at AFDA film academy in Johannesburg for general workshop and seminars on film making with the experience gathered I stepped up my game and purchased all kinds of film equipment strictly for business  ranging from Arri, red dragon, black magic, 5d mark iv, Gopro and all kinds of lights, rigs and different sound equipment at reasonable and affordable charges.

As a business man how do you tackle the challenges in the movie industry after spending so much on a movie?

To be candid we earn low returns on the movies we produce. Even how to market the movie is a big challenge not to talk of the pirates, its obvious that we film makers face the challenges of post- production. For instance, I worked on 8 different short movies with all of them on the YouTube and they earned me less than $10 and I engaged actors and actresses, housing and feeding with their professional charge which does not even match the resources invested talkless of profit margin.And I have over 21,000 followers on my YouTube but the proceeds are not as expected which prompted me into doing other side business. Moreso, I am working on a plan to tackle these challenges to restrategise as Amazon, Iroko TV and NEFTI.Even our government does not help talkless of assisting the movie industry to break even.

What is your next plan in the movie industry?

After the break, I have worked on a movie that is coming out on 16th -17th September 2022 titled MARIA which is a big movie being produced as a series and feature film. We featured Babatee, Rockzee, Felix who is a cinema actor and Titi Osinowo. The movie titled MARIA is fully packaged by me and was directed by Vessel Johnson and it cost me 5 million naira.

How do you manage your female fans?

Coping with my female fans is a thing that I manage well with better understanding of my darling wife who understands the nature of my work and the passion that I have for the work. Most times I travel for up to one or two weeks and also come home late at night. She has adapted to all of these. I also introduce most of my female fans to my wife.

What Advise do you have for the Upcoming Actors/Actresses?

Well, I will advise the upcoming actors and actresses to keep away from back-biting, drug abuse and be focused on what they are doing for now because what is worth doing at all is worth doing fine.

Why I Turned Down Jobs Offers From My Parents For Acting was last modified: September 13th, 2022 by City People

The Truth About The Rilvary Between OBEY& SUNNY