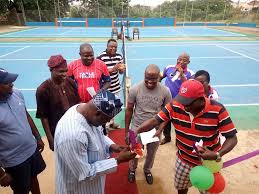 Have you been to the prestigious Ibadan Tennis Club lately? If not let’s quickly tell you for free that the club, referred as one of the earliest clubs in the South West region in those days, has wear a new look. The environment, the structures as well as the facilities (both sport and social)  in the club have been upgraded with several additional ones. All that, however, is not the major gist here. The gist is that apart from the societal value, the club has a historical appeal to many. Unknown to many, Ibadan Tennis Club has been in existence for over 90 years. While some records revealed that the club was officially inaugurated in 1925, it was gathered that the club has been operating before its founding date, as one o the first indigenous clubs in the South West part of the country. That, in fact, the club has had different names such as Ibadan Native Club, Ibadan African Club before its present name.

According to the current President of the club, Prince Akintoye O. Peter, “this is not just a club, but club with distinct. A club with great historical connection with Yoruba race, the country and the world at large. Though we have not reached where we aspired to reach but thank God for what we have been able to achieve since we came on board some six months ago. It can only be better and we are working real hard to making sure that Ibadan Tennis Club is restructured and repositioned to what it used to be in league of other earliest club in South West. A club whose founding members and exco strived, dedicated to the cause of African intellectualism and recreation,” he said.

It was also gathered that before its present location, the Club was formally located close to the Cenotaph at Dugbe, where we now have the United Bank of Africa (UBA). Before it was moved to the present location in 1957, where Premier of the LD Western Region, Late Chief Obafemi Awolowo on Monday, February 9, 1957, under the chairmanship of Late Olubadan of Ibadan land, Oba I.B Akinyelure, who serves as President of the club between 1931 and 1933.

Not only that Ibadan Tennis Club has, over the years, served as an avenue for social networking for high flying celebrities in the society, it is reputed to have produced international star players in the world of Tennis. The list include Segun Balogun, Rasheed Oloyede, the Kasali brothers (who started their career as ball boys at the club), Mrs. Peju Faboyinde, late Thompson Onibokun and others.

Prominent personalities like the executive Governor of Oyo State, Senator Abiola Ajimobi, the Grand Patron of the club; the Alaafin of Oyo Oba Lamidi Adeyemi 111; King Sunny Ade and several others all have connection with Ibadan Tennis Club. It was in the premises of the club KSA was crowned the King of Juju music some 41 years ago. At Ibadan Tennis Club, core value is their watch word. It is a club where everybody is everybody’s brothers or sisters. They all relate as family and appreciate value.

Apart from all the above mentioned sporting activities, the also has the relaxation section which include 2 Mini Bars, Main Hall, Asun Spot, Executive Lodge for confidential meetings among Exco, Secretariat, Pavilion, Canteen and Chalets which is an ongoing project. Other social activities at the club include Friday Groove; Asun Night, which comes up every last Friday of the month, to celebrate those that were born in such month; Kangol Night; Inarobo, an all night grooving at the club, which always has members of the club and their invited friends.

There is also an end of the year program that always feature interesting shows like End of the Year Party for the children; elders’ party as well as inauguration of new Exco and induction of new members, after which there will be grand finale of the end of the year program. Not only that, the club has been organising intra club competitions  and involved in many inter clubs competitions. How can one become a member of Ibadan Tennis Club? It is very simple so far one can meet up with the requirements of the club. To become a member, you must be above eighteen years of age, be responsible and above all have a verifiable means of livelihood. Then pick up membership form which goes for N1000 with two guarantors, who must be an existing member of club.

The interested individual must also be ready for oral interview after his or her filled form must have been dully considered. If the person the interview stage the club’s admition form and constitution will now be given then followed by an induction into the club. There is also an annual dues of 50 thousand, which according to what we gathered is subjected to review from time to time.  Another interesting thing about the club is that once a head of family be it father or mother is a member, the membership covers the whole family including their children so far they are below 18.