Why IBADAN People Don’t Joke With Their Amala 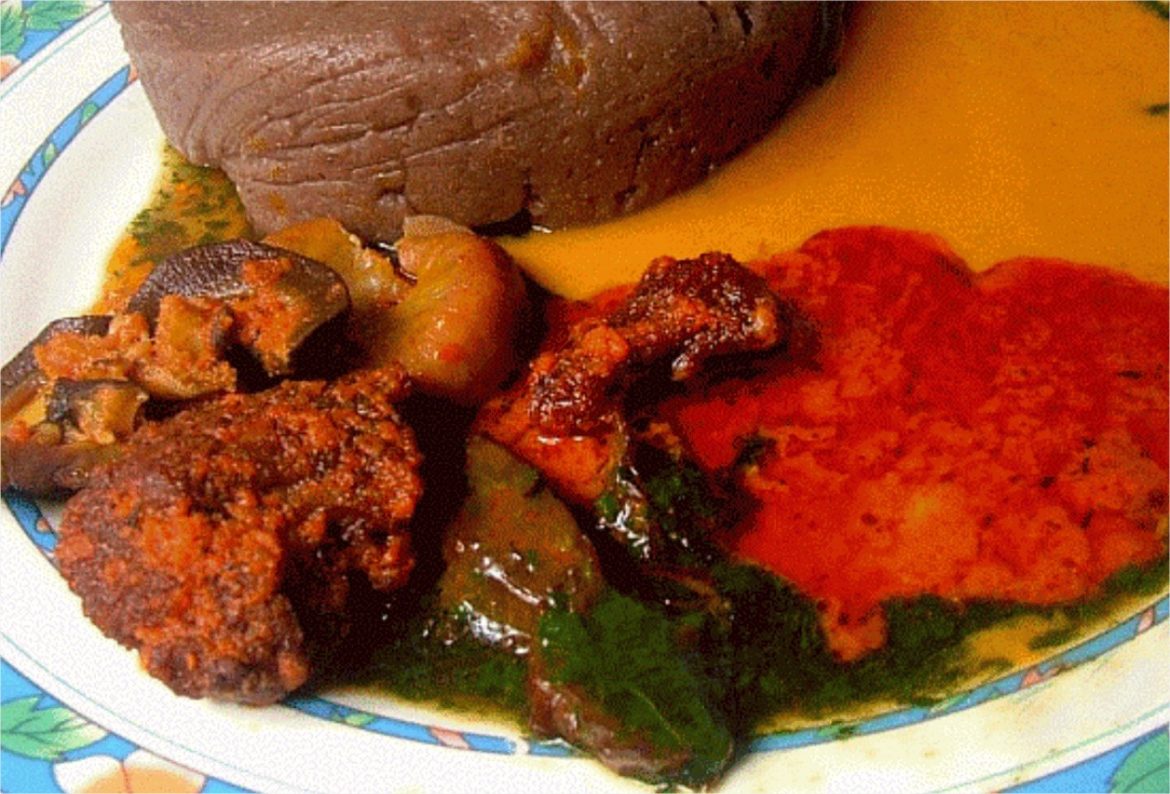 Call it a staple or delicacy, amala with gbegiri and ewedu is a meal that is most popular among indigenes of Ibadan. Its popularity is pronounced as it daily garnishes the dining tables of many homes and families, rich or poor, in the metropolis. There are those who eat amala with only ewedu and those who eat theirs with abula, which is the mixture of ewedu and gbegiri.

Amala is either yam or cassava flour made into a paste. It is eaten with ewedu, which is a leafy drooling vegetable soup, while gbegiri is beans soup. Eating amala with abula could be a splendid experience especially if you are eating amala for the first time.

In Ibadan, amala could be eaten at any time or three times daily. It could be eaten in the morning as breakfast, taken as lunch and even dinner. Early in the morning, especially from 06:30 to about 10 O’clock, a tour of the city’s bukaterias would reveal a large number of patrons, savouring brownish or whitish amala. The brownish one is made of yam flour, while the whitish is from cassava flour. Usually, it goes with hot gbegiri or abula that is steamy, which makes the eater go on a fast-tempo swallowing exercise. Unavoidably, they relish eating hot amala with steamy gbegiri or abula that gives them unmeasured satisfaction.  Faces of those who engage in this delightful exercise spot beads of perspiration as they continue swallowing their choice of breakfast. They give the paste and soup a thrilling taste with what is popularly called orisirisi.  That is a potpourri of what could be called chewable in the street parlance. The orisirisi could be beef, mutton, entrails, fish or white meat that is chicken, turkey or any other bird that could be provided for consumption in a bukateria.

At lunchtime, most amala eaters go for ewedu or efo riro which is vegetable soup. The orisirisi mostly is regarded as the icing on the cake of amala when it is set on a table for consumption. Those who take their amala as the last food of the day, would undoubtedly have an interesting story to tell about amala as dinner. All these are, however, stories of people’s experiences at home and what those who eat outside at canteens and bukateria would tell willing listeners for a penny (kobo) with eureka. In Ibadan, Amala at social gatherings is a different ball game. It is the chief if there is anything like that among food for entertaining guests  on different occasions. Menu at a wedding, house-warming, crowning of kings installation of chiefs, burial, or naming ceremonies is not complete without amala and its complementary soups on the table to give guests a thrilling experience.

Classification of foods, according to their scale of importance among the people puts pounded yam topmost on the priority list. It is followed by amala, which is called oka in local parlance. There is even a maxim that illustrates the claim. Iyan lonje, oka ni Ogun, literally meaning pounded yam is food, while yam or cassava paste is medicine. It is, therefore not a surprise that amala and gbegiri and ewedu are regarded as such among the Yoruba.

What made amala even more synonymous with Ibadan was a popular Ibadan-based politician, who used amala and gbegiri as instruments of his politics and politicking. The late Chief Lamidi Adedibu, the exponent of amala and gbegiri politicking exploited the mass poverty among the people to daily feed the poor with amala and gbegiri to ensure their continued support for him. Adedibu’s style of politicking was later tagged stomach infrastructure. Adedibu believed the axiom that the absence of hunger among a people puts their poverty in abeyance.  The doors of his home at Molete in Ibadan  was always widely opened to those who were ready to trade their stomach for political patronage. It was, therefore, not a surprise that the late Adedibu’s free food for all and sundry made his home a Mecca for the free-footed scavengers for food.

At this point, it should be mentioned that Ibadan is not the only Yoruba town or city where amala is cherished. Abeokuta, the capital of Ogun State, is synonymous with cassava flour amala.In the city and among Egba people, it is called lafun yinrin. Abeokuta people are known to be the whitish amala eaters, Ibadan people are for both yam and cassava flour amala. On the Egba people’s choice of cassava four amala, the Juju Maestro, Chief Commander Ebenezer Obey even sang praises of cassava flour amala to acknowledge its consumption among Egba people. What amala is to Ibadan people is what ikokore is to Ijebu people. Today, it appears that amala has gone beyond Ibadan metropolis, to become the choice food among Yoruba people.

In Nigeria, most people without regard to ethnicity, no longer refer to amala as Ibadan or Yoruba menu as amala has even become exportable cuisine on international fora. From city to city, in the North or south, not to talk of east or west, hardly would any high standard or elitist, canteen and even the kitchen of four-star or five-star hotels not have amala on their menu. Just ask for it and it would be served with warmth.

History reveals that in 1052, Aduke Agbede gbeyo made the first yam flour paste in Oyo, during the reign of Sango as the Oyo king. Coincidentally, it was that same year that Sango first spit fire as he spoke in anger. However, gbegiri was first made by  Anike Onibudo in 1156 at Tonkere village in the present Ibadan-West Local Government area of Oyo State. It was at that village that amala was first eaten with gbegiri to the delight of those who tasted the new combination.

The spark of interest in the new combination soon made the food a fad that people wanted to be seen eating.  When it dawned on the people that they were eating what could be called processed yam or cassava and beans, which they noted made light and smart, they become addicted. There are Ibadan people who could eat amala thrice daily to show the level of their addiction.

READ ALSO: WHY FRESH FM LAGOS IS DIFFERENT FROM OTHERS – YINKA AYEFELE

Why IBADAN People Don’t Joke With Their Amala was last modified: July 12th, 2022 by City People

Why FRESH FM LAGOS Is Different From Others – YINKA AYEFELE