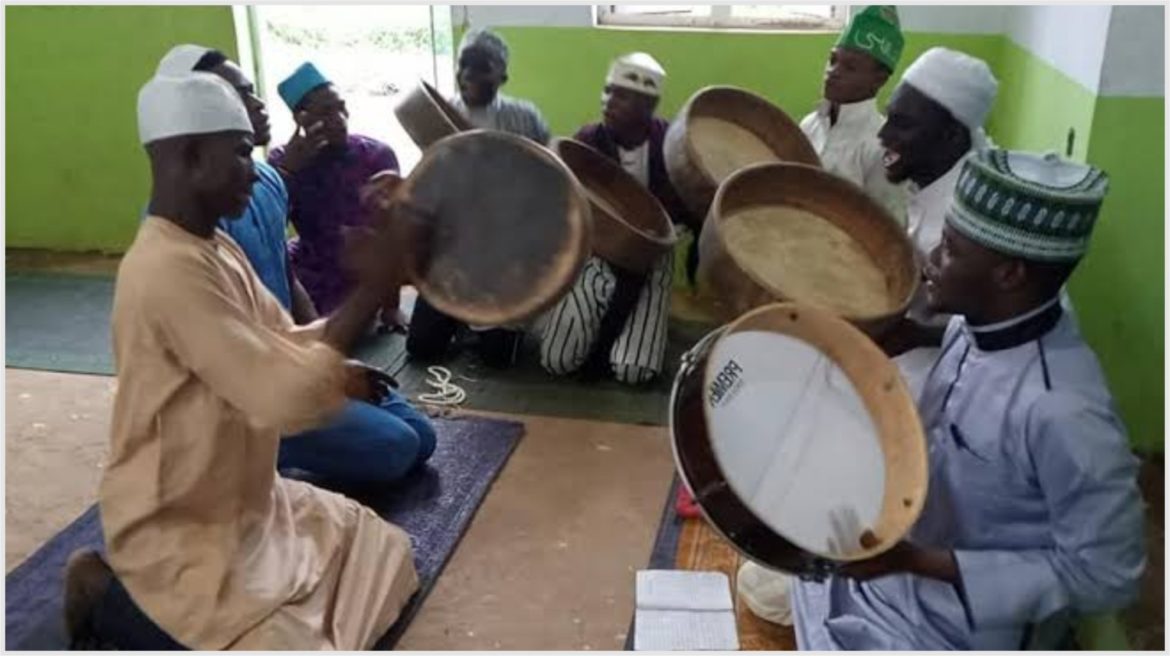 Those who always attend Islamic functions such as naming ceremonies, Walimotul Quran, Lailatul Qadri, graduation, wedding among others would have witnessed the playing of the drum called Bandiri.

Bandiri is a musical instrument that has a snare stretched across its head thereby giving the tone a buzzing quality when the drum is struck with the fingers or palm. It is played in a vertical position while the frame drum is held in the left hand and beaten with the fingers of the right. Those who play Bandiri can control the intensity of its sound by touching the back of the drum skin. They can also switch into any tune of their choice without having to switch drums.

Bandiri is capable of creating unique tunes as well as recreate old ones. It basically gives the player the opportunity to make whatever sound he loves while people display what is called the Sufi dance by punching their arms back and forth to the music. No wonder many refer to Bandiri as the drum of the Sufis.

Bandiri music in northern Nigeria developed from the religious use of the Bandiri drum by Qadiriyya Sufi adepts. Every evening in Kano, Qadirriyya Sufis gather at certain mosques for the public performance of the dhikr the ritual that uses the Bandiri drum to regulate the speed of chanting invocations.

The regular public ritual of Bandiri drumming has become a public spectacle of Qadiriyya affiliation in that “the presence of the Tariqâ [Sufi order] in the city is underlined not only visually but also by it sounds.

Prophet Mohammed is often the focus of intense love and longing and bandiri singers (and Sufi adepts) refer to themselves as “lovers of the prophet. Even though some Islamic scholars were of the opinion that playing the Bandiri is not part of worship in Islam; stressing that it’s an innovation but some prefer playing it to other forms of drums at their events for many reasons. They see the drum as highly spiritual and could help them quickly reach the peak of going spiritual. Some believe Bandiri is a very modest instrument that has a nice grip and technique used in playing it which allows the player to produce numerous sounds. Many say it’s easy to handle as It has a hole eye in its frame, permitting one to pull the thumb through it and played it uprightly.

Another reason for playing the drum is that it’s characterized by a unique thick sound, which mesmerizes the audience to dance to it and at times go spiritual. Indeed, Bandiri is very popular as it’s played in many Islamic events.

Meet Nigeria’s Grand Old Men Who Are Still Very Active In Their 70s, 80s And 90s