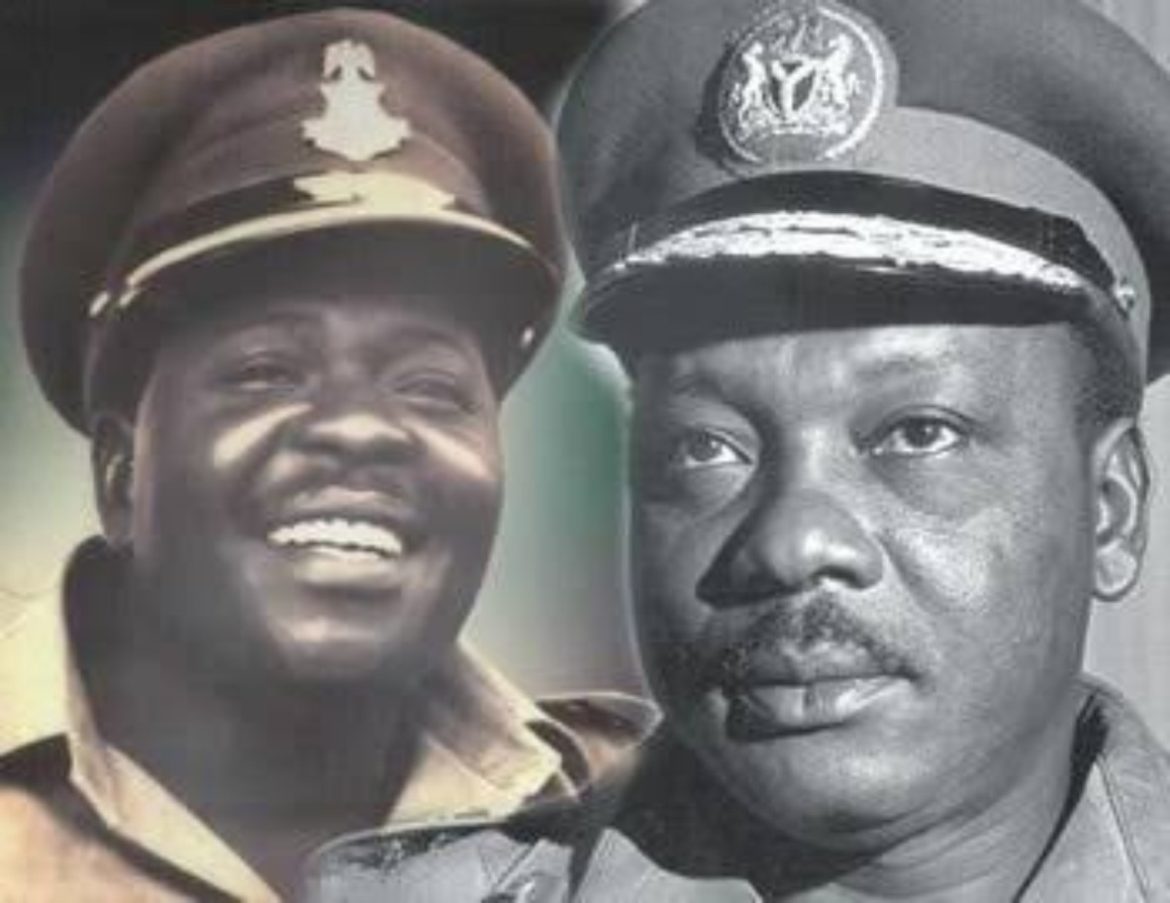 At midnight of 29 July 1966, a detachment of soldiers, mostly people of northern extraction, stormed the Government House at Agodi area of Ibadan, the capital of the defunct Western Region, baying for the blood of the first military head of state, the Late Major General Aguyi Ironsi. And they did take it. He was slain.  His host, the military governor of the defunct Western region, Lt-Colonel Adekunle Fajuyi, who insisted and pleaded with the blood-thirsty men not to kill his guest, was also killed. Aguyi Ironsi was on an official visit to the region. The visit to the region was a conclusive round-off, the last lap of Ironsi’s national tour of the federation, to soothe frayed nerves and reconcile those who were aggrieved over the then abolition of federalism and imposition of a unitary system of government on Nigeria by fiat, military decree. It was called the unification decree.

Ironsi had started what could be called a national reconciliatory tour on a very optimistic note. He had gone to Kaduna, the capital of the Northern region, where he met with the military governor of the region, Lt.-Colonel Hassan Katsina and the traditional rulers. He left the city relieved with a belief that his explanation of the rationale behind the promulgation of the unification decree had convinced the politicians and the emirs of his good intention.  He never knew that behind the calm and unsmiling faces of those who attended the meeting were boiling anger with repulsion and resolve to teach the Igbo General a lesson in political sagacity. Ironsi had believed he had bluffed his way through, at the meeting, as a thorough-bred army General. He was bubbling with an air of success as his entourage rode to the Governor’s lodge in Enugu, where he was given our son has returned welcome and his sent-forth ceremony was something he could not easily forget.  In Benin, the capital of Mid- Western region, he didn’t encounter any hostile audience. It was on this high note of win-win mood that he entered Ibadan, the capital of the defunct Western region. It did not occur to him that the city would be his waterloo.    The abolition of federalism did not go down well with the northerners, who believed that it was a deliberate policy of the new military head of state, an Igbo man, to deny northern Nigerian politicians benefits of running the federal government and even worse, it was regarded a bold attempt to impose Igbo leadership on the country, which was unacceptable the northerners. Hence, a resolve to reverse it.

The January 15, 1966 coup had dealt a devastating blow on the political and military leadership in the Northern and Western regions. The Mid-Western Region was not spared either. By the last count of the coup’s toll, the North had lost the prime minister of the federation, the late Sir Abubakar Tafawa Balewa, premier of the defunct Northern Region, the late Sir Ahmadu Bello, who was the leader (Chairman) of the Northern People’s Congress (NPC), the party controlling the federal government. It was, therefore, not an exaggeration that the death of Alhaji Bello was a big blow to the region. Two senior military officers who were northerners were also killed by the coup plotters. On its part, the Western region lost its second premier, the late Chief Samuel Ladoke Akintola and two senior military officers. The Mid-Western Region was not unaffected either as the minister of finance who was from the region, Sir Festus Oko Tiebo was slain.

What betrayed the dastardly intention of the coup plotters, who were Igbo, to arm string other major ethnic groups to promote the interest of Igbo was the protection given to Igbo politicians by the plotters. No politician of the Eastern region extraction was killed during the coup. It was, therefore, glaringly clear for even the blind to see that promotion of the Igbo agenda was the motive behind the coup. The Igbo living in northern Nigeria were not circumspect on their part on the political injury inflicted on the northern by soldiers of Eastern region extraction. They did not display sympathy to the grieving bereaved northerners, their hosts, or show any sign of remorse for what their brothers did to those who were not Igbo in the country. Instead, they were even bragging about it in public. Cartoons of Sir Ahmadu Bello, portraying and begging Major Kaduna Nzegwu who killed him and even a worse one of Bello carrying Nzegwu on his shoulders were mounted in several shops of Igbo in Kaduna. All this, without mincing words, enraged the northerners.

Though the coup failed, the greatest beneficiary was an Igbo man. There, however, were conflicting claims over the claim that Major-General Aguyi Ironsi was not involved in the planning of the coup, while some observers asserted that he told the plotters that he was with them if they succeeded, but on their own, if they failed. That Ironsi was an Igbo and the most senior military officer in Nigeria at that time could not absolve him of involvement in what was tagged the Igbo conspiracy. He emerged the head of state and the supreme commander of the Armed Forces of Nigeria and he was rash to consolidate his new powers. In line with public opinion in the south, where people in unison said the coup served the corrupt politicians rights. The opinion in the north was opposed to that of the southerners. The northerners expected that the coup plotters should have been charged and brought to face trial in a tribunal, but that was not the case. Ironsi only put the coup plotters in detention and treated them as heroes. The northerners were literally boiling over what they described as pampering criminals, who should be shot for spilling the blood of politicians and their seniors in the military.

The unification decree was the last stroke that broke the camel’s back. Politicians in the north were alarmed that they could not compete with their better-educated counterparts in the south if they were looking for political appointments. They, therefore, vowed that the decree that changed Nigeria from the Federal Republic of Nigeria to just the Republic of Nigeria would not bring any good to them, but make them slaves at the table of Igbo lords. The national advisory committee set up by Ironsi did not help matters either. Why? Three members of the committee were all Igbo. No wonder, those who wanted to deride Ironsi Administration called it the Igbo government by Igbo military officers and for only Igbo. Again, Ironsi orders a massive transfer of military men in the country as a way of displacing serving men from where they had been and had built different relationships. The transfer to new places of assignment, he knew, would disorient many of them as they would need ample time to familiarize themselves at their new stations.

Worse of Ironsi’s weakness was his political blind spot which did not show him that the north was already rumbling. He did not know that the country was already primed to blow up in a counter-coup by the northerners to avenge the January 15, coup. He believed that with the reconciliatory tour of the country, he would overcome all resistance to his effort to force unity on a multi-ethnic country that boasted of different religions and diverse interests.

The coup plotters led by the then Major Theophilus  Danjuma gained access into the Government House at Agodi in Ibadan after disarming the guards and stormed the main building where the head of state and his host, Lt. Colonel Fajuyi, Major-General Ironsi, were taking their rest for the day. They arrested Ironsi. It was at that point that Fajuyi intervened and pleaded with the coup plotter to spare his guest. He said it would not be too good to arrest the head of state while he was a guest in the Government House of the Western region. The angry soldiers who were bent on revenge were not ready to consider the rationale of what Lt. Colonel was saying. When Fajuyi realised that his persuasion would not convince them, he said they had to arrest the two of them. Fajuyi knew that it would not be easy to convince anybody that he was not a conspirator. Besides, he knew in his mind that the sad incident would undoubtedly set the Igbo against the Yoruba. That was how Fajuyi was arrested and taken away with his guest, Major-General Ironsi. The two were shot in an obscure area in the city. Their death was not immediately announced.

READ ALSO: WHY MEN THINK THEY ARE MORE CLEVER THAN WOMEN

Just In: We’ll lift twitter ban ‘in a matter of days’ – FG

Why The Real Estate Coy. Deluxe Residences Ltd Stands Out