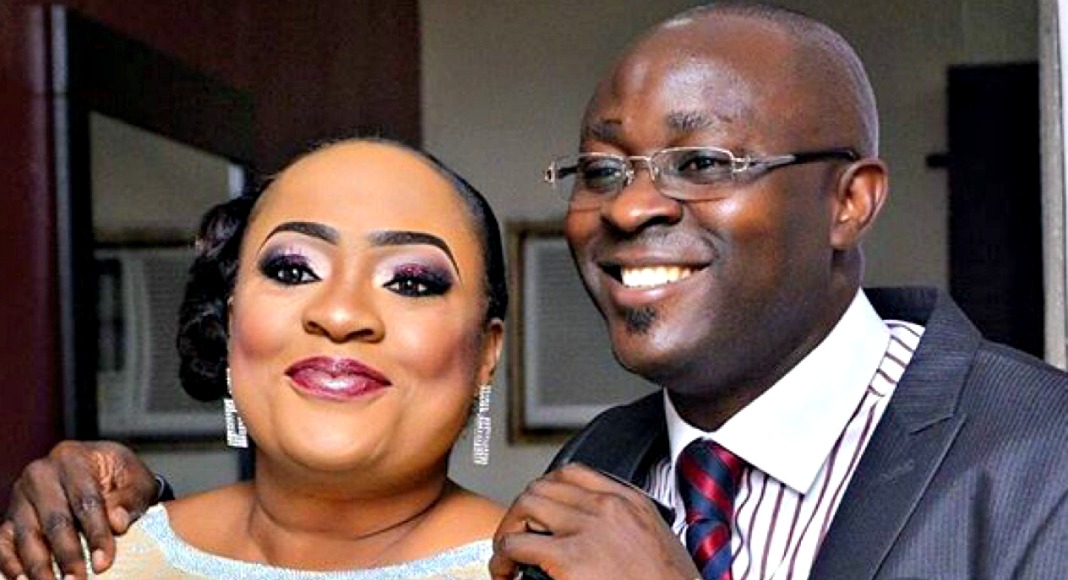 Beautiful movie star, Foluke Daramola Salako is one of the highly respected and influential actresses in the entertainment industry, staying relevant in both English and Yoruba movie industry, even after spending over 2 decades in the industry.

Though this delectable mother of two’s first marriage didn’t work, (it only lasted for few years), it produced two beautiful kids, the hardworking actress has been really lucky when it comes to marriage.

She later got married to Kayode Salako a handsome gentleman who is an activist, businessman and philanthropist. The couple get married on February 15th, 2013, and it has been a match made in heaven, as she has been enjoying every bit of her marriage and all the necessary support, every woman desires from her man.

Since they got married, Kayode Salako has told whoever cares to listen that their marriage has come to stay, he has remained a great pillar of support to the actress. He taken her children as his, he has influenced and encouraged her to follow her dream.

They often step out together at event and parties and the just-concluded event Foluke Daramola organised for veterans in the industry, Kayode Salako was up and doing, giving his beautiful wife all the necessary support and also ensuring, she had a successful event, which ended up well. City People’s Senior Showbiz Reporter, BIODUN ALAO was able to chat with Foluke Daramola’s husband. Despite being extremely busy, he talked about the reason behind the event for the veterans, and why his marriage with Foluke Daramola will remain intact because they both understand each other a great deal. Below are excerpts of the interview.

Why did you decide to support your wife in her chosen career?

First and foremost, let me tell you about my philosophy of life. One, is Live and let live. I don’t use my life to harass anybody or to inconvenience anybody. Secondly a Philosopher once said. Nothing is a problem, only thinking makes it so. So I don’t attach stupid meanings to most things around me. I am an open-hearted and liberal inclined person. If Foluke offends me here,  we will fight here now, and that is the end. We are too compatible for our marriage to crash. I don’t bear grudges or use my life to harass women. We didn’t come to this world together, we came individually on our own. It is here we met, and we might go back together. If I die, she won’t go with me, and the same applies to her. So why am I disturbing her? So that is my philosophy about life, and if you want to be an ideal husband to any celebrity, you need to understand her, you must understand the nature of her profession or job, so to speak. and you must allow her to run it, the way it will pay off for her, If you continue to serve as a watchdog for her, it won’t work that way. And when she is not okay, she won’t be productive, she wouldn’t be able to bring opportunities from outside for the two of you to enjoy quality lives. So if you want a woman to be happy with you, give her free hand, give the ultimate level of freedom and be a mentally liberal person, don’t be someone that will be too uptight about life, so those are the things I don’t have or practice. I have also been able to explain my attribute to you.

What my wife is doing here today is what she is expected to be doing for her to be relevant in the industry. If I don’t allow her to be doing these things, I might just be killing her stardom and also be killing gradually without knowing. So I strongly believe in Live and let live. Also, another vital issue is that I respect her a lot. She is a responsible woman I believe in her because she equally believes in me. We are spiritually compatible, socially compatible and characterlly compatible.

The two of us behave in the same way and that is how we have been living our lives. I want her to do well in life, I want her to explore and also to be extremely free. She needs to be free all the time and be herself or else she won’t be happy about her and she will be afraid, and that is why you can see me giving her all the support she wants. And this project you see her doing shouldn’t be a problem to any right-thinking human being or husband. This is a purely humanitarian project, the first of its kind, that I know in the history of Nollywood. That someone would say okay, let me commit my NGO to the care of the old age veterans in the movie industry. I mean the old age and generational veterans in the industry. This is the first time. And why did she go into it?

She saw that many of them are going through hardship, they are going through hard times. But because of shame and how the public will take it, they were ashamed to come out to let the public know how they are living. They are ashamed, but this is an NGO that is now helping them to bring their situation or predicament to the limelight to the consciousness of kind-hearted Nigerians. I will start running an annual programme for you. An annual celebration, honour and award, an event for them to come and give testimonies of what the NGO would have been able to do for them in a year. Foluke has told me that she is really going to be committed making sure that these old age Nollywood veterans live quality lives again. She wants them to be happy, healthy and productive again. She has told me, that, that is where she will spend the time of her NGO to achieve, she wants her NGO to concentrate on them, every NGO has its own cooperation subject theme are strictly for widows, some will say, our own is street urchins, some will say our own is for school drop out. Some for widowers and lots of others.

The American system spends the whole of its life, taking care of these people, Children, Women and Old people like Foluke is doing now. But unfortunately, go inside there, the presence of the government is not visible, because our value system don’t identify with things like this. If it is one of them, that is celebrating birthday, you will see all those Honourables here. The presence of the government is not felt here and Foluke went round. She travelled to over 15 states. She served invitations to all the wives of the Governors in South-West But where are they today? They are not here. They didn’t even send a representative because they feel what Foluke is doing today is not important to the society and they are worthless people. If it is Bobrisky that wants to celebrate birthday now, you will see people buying Invites for half a million naira We are in trouble in Nigeria. We are in trouble with what we do with our value system.

What and how have you contributed to the success of this project?