Why People Rush To Ori Oke Baba Abiye In EDE – The Story Of The Founder, Prophet S.O. AKANDE 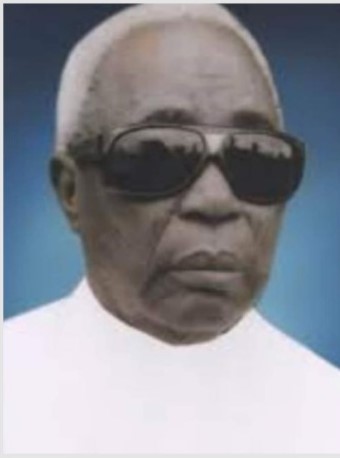 Not many people know the story of Prophet Samson Oladeji Akande, the founder of Ede Prayer Mountain. We can reveal much to you about him, as revealed by his son, Pastor Timothy Funso Akande, in his book entitled: Baba Abiye: The Making Of The Prophet. Although the book was first published in October 2002. It was reprinted in 2012. It was published by Gospel Promotion Outreach. Below are aspects of the life of this great man who had changed many lives in Nigeria.

Though Prophet Akande has been dead for a while, the ministry of a popular pastor called Baba Abiye has continued to grow big and bigger. Almost on a daily basis, many Christians go there to pray. This is because many have had their prayers answered at Ori-Oke Baba Abiye. Prophet S.O. Akande, the founder had built a solid reputation that makes many to respect him. He was a legend in his lifetime.

Prophet Akande was born of pagan parents at Kusi’s Compound, Ede, about 1896. The actual date of his birth was not known, but it was during the reign of Oba Oyelekan, the Timi of Ede then. His father was Joseph Moronkola Akande, while his mother was Marian Oyemomi Akande.

For many years, Prophet Akande’s father had a running battle with barrenness in his household. It was in his quest for children that Moronkola Akande married six wives. But only 3 had children.

Since his parents were farmers, Oladeji naturally took to farming and he was highly favoured by the Lord. His generosity to people made him popular and he was loved by all and sundry. As Islam was the popular religion in Ede during his growing up years, young Oladeji Akande became a Muslim and took on Salami as his Islamic name. It was about that time that he met Ayisatu Mojirade, daughter of Pa Lawani of Ojisun’s Compound, Ede, who was later to become his life-long companion and wife for almost sixty years.

“In 1935, after about two years of courtship, the date for their wedding was fixed and preparation was gathering momentum. The happy event was only 13 days away when tragedy struck. The bridegroom, Salami Oladeji Akande, suddenly became blind. Every effort was made by his parents to help him regain his sight but without success. This tragedy became what brought O1adeji Akande to know Christ. Also worthy of note is Mojirade’s steadfast love for her would-be husband during those trying times.

Contrary to many people’s expectations, Moji stood by her man and it was in the midst of the tribulation that they eventually got married. From 1935 when the sight problem began, Oladeji Akande passed through many nasty experiences.

He was taken to many herbalists in Ede. When none of them could solve his problem, 3 of his relations, namely Amosa, Salami Ige and Joshua Ogunsola (Agbede) took Akande to a medical doctor in Ilorin. A lot of money was spent or medical bills during the eight months he spent there before he was transferred to the home of a Muslim Priest, Muritala of Ologbo’s Compound, Kankatu area in Ilorin. He spent considerable time with this priest who tried his best to treat not only Akande’s eye problem but also his other ailments. During Salami Akande’s stay with the Islamic priest, he learnt the Koran by heart and he was well versed in Koranic recitation. This, however, did not solve his problem nor reduce his suffering.

In fact, it was during that time that Salami tasted the extreme end of poverty, He lacked food and clothing. All he had with him besides his only dress was a covering cloth. Both of these he could not afford to wash until they became so dirty and lice-infested.

Salami Akande was in this squalor when his elder sister, Aderonke, from Ibadan, visited him one day.

“The wretched condition in which Aderonke met her brother broke down her heart and moved her to tears. His clothes were dirty, faded and lice-infested. The grief-stricken sister gave her wrapper-to Oladeji and returned to Ibadan, using her headgear as a wrapper. Sad to say, much as Salami Akande appreciated his sister’s kind gesture, it was not long before hunger forced him to sell the new wrapper for eleven kobo and resorted to the use of his old, faded and lice-infested clothes. It was at that point when the suffering became so traumatic and unbearable that Salami Akande attempted to take his own life and put an end to his misery. One day, he headed for the railway line. His plan was to throw himself on rail line before a moving train and get crushed to death. But God who had a better plan, a glorious tomorrow for Akande, providentially foiled the suicide bid. This Ilorin episode was not Akande’s first attempt at suicide. He had made a similar attempt at Ede”.

That day, he headed for the railway station without disclosing his mission to anyone. On the way, God intercepted him and directed his attention elsewhere. Several years later, when God had given Prophet Akande’s life a positive turn-around, he used to recall this period of his life to counsel and encourage those who thought that there was nothing more to live for in life.

Earlier, before he left for Ilorin for treatment, his wife had given birth to a female child they named Sikiratu. However, the child died in infancy and the couple’s effort at having another child afterwards proved abortive. This added another dimension to their sufferings and sorrow.

HOW HE GOT SAVED

For Salami Akande and his wife, the dawn of joy came unnoticed in 1938 when a woman-Evangelist, Mrs Marian Oni, brought the gospel of Christ to Ede. One early morning, as she was passing by, sounding her silver bell and proclaiming Jesus as the Saviour, Salami Akande was moved to appeal to Jesus for help. “Please, help me tell your Jesus to heal me and restore my sight,” he shouted at the woman-evangelist. Mrs Marian Oni stopped and asked him to come.

She spoke with him, promising to come back to take him to a prayer meeting later that day. She assured him that if he could follow Jesus, He would surely solve all his problems. “Do you think that Jesus can solve my problems?” Salami Akande asked the Prophetess. “Yes, if you believe, the Lord Jesus will not only give you victory, He will also bless you abundantly and use you mightily.” Marian Oni said prophetically. Salami Akande’s heart joyfully swelled to these promises without wavering. He followed the woman to the evangelistic service, which was being held at Bisiku’s Compound. The programme was being co-ordinated by Marian Oni and Abraham Ajijola-Oluwa from Ifon in Osun.

“That year, 1938, a branch of Christ Apostolic Church was established at Ede in the house of Chief Adeniran at Bisiku’s Compound. The same year, the late Pastor J. B. Odusona paid a pastoral visit to the Church and baptised Salami Akande, his wife, Mojirade, and others who had joined the Church. He changed his name from Salami to Samson, while his wife dropped her Muslim name, Ayisatu, and became Ruth. The same day, after the water baptism, Samson Akande and his wife received the baptism of the Holy Spirit”.

“The conversion of Salami Akande and his wife to Christianity attracted a serious wave of persecution from the Muslim Community. The Muslims were very bitter at the loss of two of their faithful to a rival religion. They launched vicious attacks on Akande and his wife but with much prayer and steadfast faith in the Lord, they overcame them all. The couple gave themselves to many prayers during and after the revival programme”.

The same year, 1938, in answer to their prayers, God opened Mrs Ruth Akande’s womb and she conceived again. It was contrary to what some herbalists and witch-doctors had foretold. After the death of their first child in 1936, the herbalists had predicted that Mrs Akande would not be pregnant again until after nine years. The Lord proved them wrong and demonstrated His power and supremacy over the power of darkness. Mark you, God has the final say over your life’s situation.

When the pregnancy was three months old, Prophet D. O. Babajide arrived at Ede to continue the revival programme, which was in progress. His arrival added new impetus to the revival and more souls were won into the fold. On his arrival at Ede, Prophet Babajide told Akande that his wife would give birth to a male child and that he would be named Samuel. God confirmed His word when, in 1939, Mrs Akande gave birth to a bouncing baby boy, who was christened Samuel Oluwatayo. The birth of Samuel Oluwatayo caused a great stir in Kusi’s Compound because no male child had been born in Pa. Akande’s household again after the birth of Salami Oladeji, the father of the new baby.

“That and many other miracles in the lives of Samson Akande and his wife led to the conversion to Christianity of many people in the Compound, including his parents, Pa. Moronkola and Oyemomi Akande, who were formerly idol worshippers. Both of them were baptized and they remained steadfast in faith until they answered the home-call, Mama in 1948 and Papa in 1957.

“Early in 1939, C.A.C leaders approached the then Timi of Ede, Oba Sanusi Akangbe, for a parcel of land to build a Church. The monarch acceded to their request and gave them Talafia forest, a forest preserved as a shrine for Oro festival and hunters’ ancestral worship. Immediately after the allocation of the land to ·the Church, a place of worship, made with palm leaves, was erected at the site. Consequently, the Church shifted from Bisiku’s Compound to Talafia forest. Revival services continued in earnest. Many outstanding miracles were recorded between 1938 and 1939. Despite the fact that the Church was located in the dreaded Talafia forest, many people flocked there to receive salvation and miracles from the Lord Jesus. After the erection of the tent Church, another 4-bedroom building with a thatched roof was erected to serve as Vicarage and Faith home for the sick. During that period, Samson Akande proved convincingly that physical disability poses no barrier whenever the will to work for God is present. Despite his physical handicap, Akande worked relentlessly and contributed significantly to the construction of the Church and the vicarage. He went into the forest, cut grasses and sticks for the roofing and personally carried them to the site. He wove the palm leaves and grasses used as ridges for the roofs of the buildings”.

Why People Rush To Ori Oke Baba Abiye In EDE – The Story Of The Founder, Prophet S.O. AKANDE was last modified: October 4th, 2019 by City People