Home Politics Why Pres. BUHARI Brought In JONATHAN As A Joker
Politics

Why Pres. BUHARI Brought In JONATHAN As A Joker 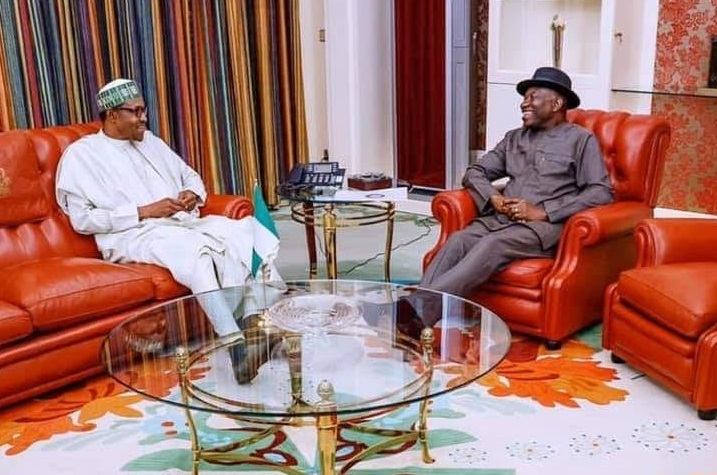 +Why JONATHAN Wants To Come Back

The All Progressive Congress, APC camp was thrown into apprehension when the Federal High Court sitting in Yenagoa ruled that former President Goodluck Jonathan is eligible to contest the 2023 presidential election.

The Judge, Justice Isa Hamma Dashen, who gave the judgement last week, held that Jonathan’s right to vie for the office of president again cannot be stopped by any retroactive law. Other aspirants have written off Goodluck Jonathan based on the clause that a vice president who has concluded the term of his principal in addition to spending another 4 years of his own as President cannot contest.

The former President is one of many in whose names presidential nomination forms of the All Progressives Congress (APC) were purchased. While it was not clear if he submitted his form, inside sources within the presidency held that the former president was the favourite of President Buhari.

While there were doubts about his ambition, he was embarking on key visits to key people in the north and making moves in the background while other aspirants were meeting with delegates and sharing envelopes. Some party members have also insisted that the former president knew that President Buhari will not sign the newly amended electoral act, the number of delegates would not be as much as other aspirants had predicted. He knew that President Buhari is the key delegate that will determine who carried the flag.

But why would Buhari have GEJ in mind for a successor?

Recall that before now, the permutations and predictions, following President Buhari’s clue of a successor during his exclusive interview with Channels Television, were tilting towards the Vice President Yemi Osinbajo, Transportation Minister, Rotimi Amaechi, the state minister for petroleum, Timipre Silva and the CBN Governor, Godwin Emefiele. No one had the slightest idea that former President Jonathan could be in the picture.

He had muted the idea of many possible replacements to some of his close allies and each recommendation is met with deafening reservation by his boys. Among the list of the possible southern replacement, former President Goodluck Jonathan was the pick for reasons obvious to every political analyst; he has only one term tenure, he’s from the south, he’s a Christian and he is quite a nationalist who can bend rules for the sake of peace.

Mr President’s close circle are in awe of how President Buhari speaks highly of the former president as a statesman who has continued to maintain absolute decorum, not given to hate or any ploy/plot to undermine or distract his (Buhari’s) administration, with the verbal and legal tantrums that is the stuff of aggrieved politicians.

One can only attribute this to the class, maturity and selflessness that makes the man. Instead, Dr Jonathan has devoted his life to driving peace across the African continent, earning him recognition as a “Hero of Democracy” and “Ambassador of Peace” across the globe.

Dr Goodluck Jonathan’s global networks influence and acceptability transcend the political divide, thin ethnic and religious lines that have often proved volatile throughout our common existence. As such, supporting and endorsing him to succeed Buhari as Nigeria’s President, would have a tremendous impact on our currently threatened situation.

This plot has been kept active by two governors from the North-West, who are plotting for a strong APC Northern governor to become Jonathan’s running mate.

There is also a plan to reconcile Jonathan with a South-South Minister.

Recall that barely two days to the elections, President Buhari had a closed-door meeting with the governors before he left the country with his wife. There were indications that he’d informed the APC governors of his preferred candidate and charged them to work around ensuring that the person is democratically elected.

As a consequence, some of the aspirants who have seen the writing on the wall, also made alternative provisions to ensure that they are not totally schemed out of the race.

Reliable sources hold that Asiwaju, who is the major challenge for the cabal and presidency, who is also aware of the plot to field President Buhari’s preferred candidate had met with some of the major opposition parties to seek alliance and joint force to compete with whoever eventually emerged other than him.

The race had already begun last week before the commencement of the primary.

All the media arsenal has been prepared to be deployed and launched by various aggrieved parties to fight the war once the primaries are over.

In the end, Jonathan got a waiver from the party, he was cleared to contest by the court, and his nomination form came alive.

Dr Jonathan’s antecedents ordinarily set him out as a patriot, who shelves his personal ambitions for the considerations and general well-being of Nigerians. It is believed that his charisma and peaceful disposition is a needed qualities that can save Nigeria from disintegration and chaos. He comes with an unmatched experience, having led the economic revolution which kept Nigeria as one of the world’s wealthiest black nations, with public prosperity, stable prices and a handsome foreign reserve.

Why Pres. BUHARI Brought In JONATHAN As A Joker was last modified: May 31st, 2022 by City People

RIVERS PDP’s Plan To Have Its Nat...