Home Politics Why Pres. BUHARI Is Afraid Of TINUBU
Politics 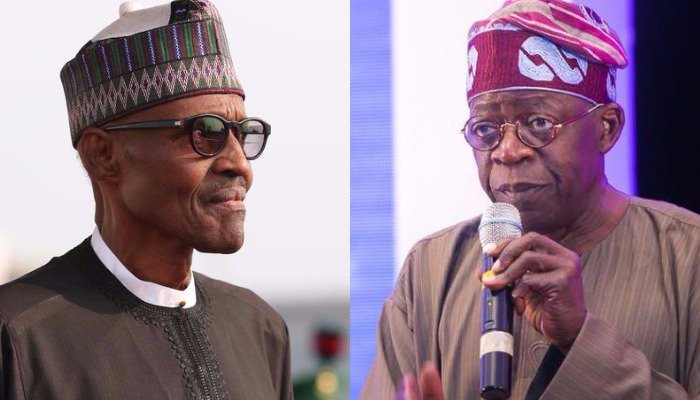 The crack between President Mohammadu Buhari and the National Leader of All Progressive Congress (APC), Bola Ahmed Tinubu, has further widened, as they are no longer on good terms, all because of the 2023 presidential election.

A few months back there was a report that trended all over the social media about President Buhari and the Aso-Rock cabal turning against Tinubu’s 2023 presidential ambition.

According to that report, the cabal behind it all is right inside Nigeria’s number one house, Aso Rock. It has kicked against Tinubu’s ambition to contest the 2023 Presidential race.

This cabal determines who gets key positions. Now, they want to pick another candidate as Buhari’s successor.

Buhari we hear is not a big fan of Tinubu.

In another report made public not long ago, one of the insiders who also had access to Aso Rock confirmed that the cabal believes that Tinubu will not protect Buhari’s interest after his tenure, hence the need to look elsewhere. “We are working hard to convince the president to support a candidate that would protect his interest after his tenure,” the source, who sought not to be named, said.

Similarly, a cabinet member said: “The president is not interested in Tinubu’s candidature because he is not convinced that Asiwaju is the right person to succeed him.”

A few years ago, the founder and pioneer national chairman of the defunct Congress for Progressive Change (CPC), Senator Rufai Hanga, has said there was “implied agreement” President Muhammadu Buhari would hand over power to the national leader of the All Progressives Congress (APC) and former Governor of Lagos State, Asiwaju Ahmed Bola Tinubu in 2023.

A few days ago, while Tinubu was addressing Ogun delegates he revealed what he told Buhari if he wins. He told Buhari to do Yoruba bidding when he went to meet with him in Katsina.

Why is Buhari scared of Tinubu? Although some of the reasons why the President may be sceptical about Tinubu becoming his successor have been mentioned. Another reason why  Buhari won’t want Asiwaju to succeed him is that the cabal from the North feels Asiwaju is too smart and powerful for them (the northerners) to control if he becomes the president.

Let’s tell you what some political analysts feel. They feel many of Buhari’s policies don’t favour the West and as such, he (Buhari) wants somebody who he can trust to remain in power to continue his legacy. One of the policies is the visa on arrival which favours the other Fulani from all over West Africa.

A few months back, President Muhammadu Buhari was advised to urgently stop his policy of ‘Visa on arrival’ for foreign herdsmen to enable Nigerian security agencies check the influx of militiamen and other criminals in the move to tackle insecurity.

Benue State chapter of the Christian Association of Nigeria (CAN) which gave the advice, at a press conference in Makurdi, said it was convinced that President Buhari is aware of what the open visa policy has cost Nigeria in terms of the worsening security situation.

With this in mind, he would want somebody he trusts; somebody he has worked with, that can continue with such a policy.

Another reason is that someone who is being rumoured to have been nursing the Fulani agenda, wouldn’t want that plan to go unachieved. He would still want to be relevant outside the government by ensuring Fulani still remains powerful in governance. And the only way is to put somebody that can continue in the same direction.

Another point is the fear of the unknown. Asiwaju, to some extent, has his own plan and idea of how a country should function for the benefit of every Nigerian. He is seen as a smart individual who could not be trusted when he attains power. Don’t forget there has been a continuous issue on the restructuring of the country. This is the biggest fear of the North. They feel it would be difficult to operate under this system, so they want to ensure somebody who shares the same objective on the issue of restructuring, gets the APC ticket and subsequently emerge as President.

Why Pres. BUHARI Is Afraid Of TINUBU was last modified: June 7th, 2022 by Isaac Abimbade

Why Gov. SANWO-OLU Will Surely Get 2nd...