Home Politics Why Sen. AMOSUN Is Not Happy With VP OSINBAJO
Politics

Why Sen. AMOSUN Is Not Happy With VP OSINBAJO 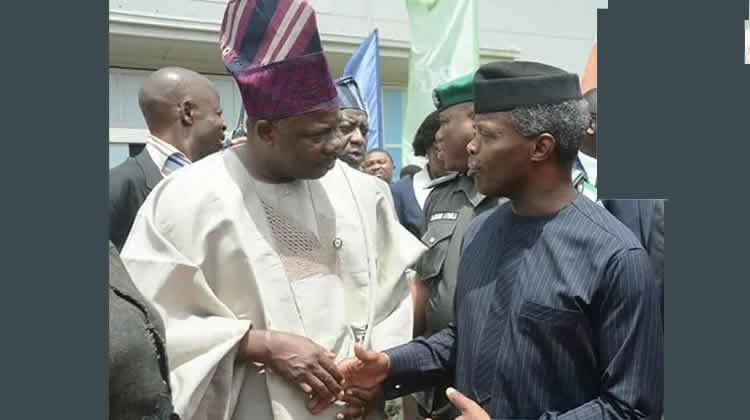 •How They Parted Ways 3 Years Ago

It is no longer news that all is not well in the intraparty structure of the All Progressives Congress, APC, in Ogun State. Before the eyes of the people, the war of superiority and relevance is between the incumbent governor, Prince Dapo Abiodun and the 2-term governor and serving Senator, Ibikunle Amosun. But, there is a bigger version to the crisis than who calls the shot between both powerful Ogun figures. Not many people are aware that there is a cold war raging between Senator Ibikunle Amosun and the Vice President, Yemi Osinbajo.

However, in the beginning, it was not so.

For those who are very much aware, the road to Abuja for Osinbajo couldn’t have been completely documented for historical reference without a bold mention of Amosun’s role in all of it.

Amosun came in handy when the choice of Osinbajo as a replacement to Asiwaju in Buhari’s first term presidential bid in 2015. According to a source, Asiwaju had kicked against the recommendation of Osinbajo by the then Osun State Governor, Ogbeni Rauf Aregbesola. But with the intervention of Senator Amosun, Asiwaju gave in to the option among the likes of Olagunsoye Oyinlola and Olorunnibe Mamora.

Amosun had the honour to call Osinbajo on phone and invited him to the Ogun State House in Abuja to break the good news. It is also on record that it was Amosun who introduced Osinbajo to President Buhari for the very first time.

The two Ogun sons became almost inseparable in the first couple of years into Buhari and Osinbajo’s administration.

The wall began to crack about 3 years ago when, Amosun attempted to field a successor as Ogun State Governor, against the interest of the other power block that comprised former Ogun Governor, Olusegun Osoba, Asiwaju Bola Ahmed Tinubu and other APC giants who are interested in the politics of Ogun State. Amosun locked horns with some key figures within the state at the state and national level, and unfortunately, Osinbajo had to queue behind these people Amosun had tagged as his mortal enemies; Osoba and Asiwaju.

Recall that Asiwaju Bola Ahmed Tinubu played a deft hand in the emergence of Dapo Abiodun as the candidate of the APC in the state. Tinubu, it was gathered, had initially backed a serving National Assembly member, Senator Solomon Adeola, popularly known as Yayi, as the 2019 governor of the state.

However, the choice of Yayi pitched Amosun against Tinubu and Osoba who rooted for the candidacy of Adeola, who is from Yewa. The Tinubu group was forced to make a retreat following Yewa people’s vehement and hostile opposition to their bid. Bullied by Amosun’s propaganda machine, Yayi was labeled a foreigner and a surrogate of Tinubu.

While the resistance was on, Asiwaju, it was learnt, secretly dumped Yayi, backed Dapo Abiodun and called his camp in Ogun to work for his emergence as the flagbearer. APC Chairman, Adams Oshomole, who also belonged to Tinubu’s camp of ACN in the APC caucus, also played a massive role in the routing of Amosun.

Osinbajo had also decided to latch on the fight for a successor between both camps and decided to settle for Prince Dapo Abiodun, who evidently won the election and succeeded Amosun.

To better realize their plot of checkmating any resistance from the Yewa block and Amosun camp, the powerful Ijebu-Remo Kingdom was brought into the deal. Tinubu and his Egba supporters decided to cede the governorship position to the Ijebu-Remo division, but with a caveat to pick the candidate from their camp.

This is where Vice President, Yemi Osinbajo was saddled with the task of interfacing with his people. Respected within his Ijebu tribe, the vice president played a major role in the emergence of the APC governorship candidate.

Amosun’s bid to maintain control of the Ogun Government House through his protégés, Adekunle Akinlade of the Allied People’s Movement was truncated by Dapo Abiodun of the APC who rode to victory, ably supported by the Vice President, Yemi Osinbajo.

The 2023 election is barely 13 months away and VP Osinbajo, from all indications, is casting his nets into the water. We, however, do not know who Amosun will be rooting for at the poll. First is the fact that he has burnt bridges with the Bourdillion figure after the 2019 campaign in Ogun that brought out the other side of Asiwaju, flinging the party symbol out of his sight. Second is the fact that the currently recognised APC leadership is on the side of Dapo Abiodun, whose candidacy list may be considered over Amosun’s list. However, one cannot rule out the fact that Amosun retains his strong political structure as VP Osinbajo operates more at the centre and may not be as strong at the local level, which remains the stronghold of Amosun.

In the past couple of weeks, Amosun’s presidential campaign posters have flooded Ogun Central and Ogun West, which suggests that the lawmaker is all out to restate that he remains the MVP in the South-Western politics. There is also the narrative that Ibikunle Amosun has been pencilled down as the Attorney-General of the federation, Abubakar Malami’s running mate under the APC.

Amosun was elected senator in 2003. However, in 2007, he made an unsuccessful bid to become the governor of the state on the platform of All Nigeria’s People’s Party (ANPP). He lost the PDP’s, Gbenga Daniel.

Yemi Osinbajo is a professor, lawyer and politician who is currently serving as the Vice President of Nigeria, since 29 May 2015, and he’s been tipped to contest in the forthcoming presidential elections.

READ ALSO: SEE THE LIST OF TOP POLITICIANS TINUBU MADE AS GOVERNOR

Why Sen. AMOSUN Is Not Happy With VP OSINBAJO was last modified: December 22nd, 2021 by Seun Emmanuel

How To Know You’re Not In Love Any More