Why The IGBO Will Find It Difficult To Be President 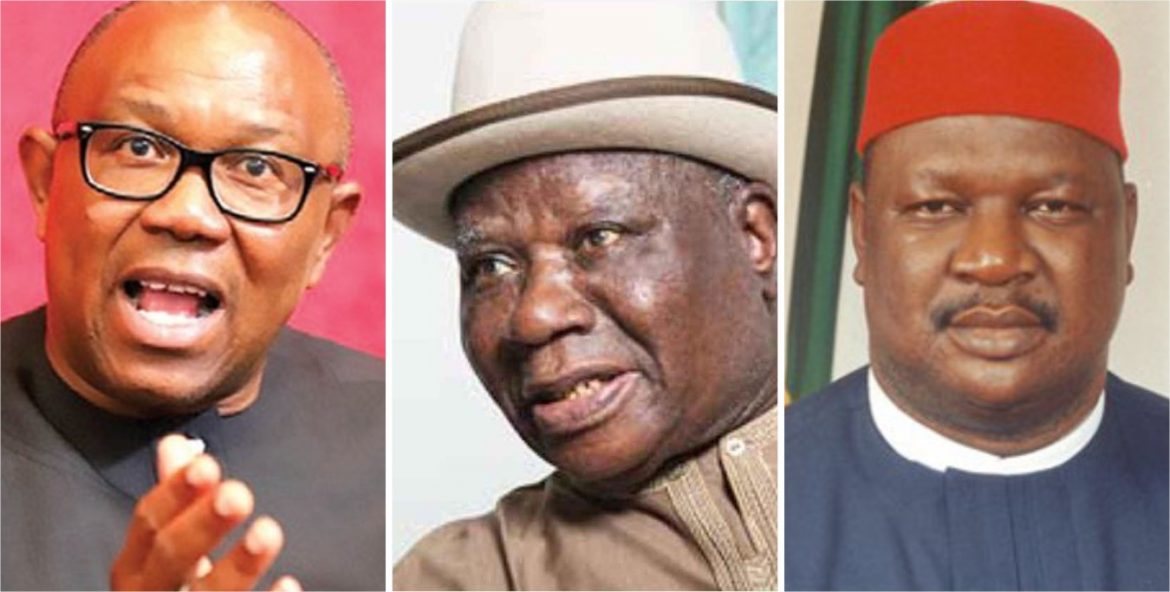 Ever since Edwin Clark, leader of the Pan-Niger Delta Forum, has stated the South East must produce Nigeria’s next president in 2023, the eastern political elites have further strengthened their repositioning in the zoning calculation and withdrawing their subordinating negotiation to battle for the real thing come 2023.

The elder statesman, Edwin Clark had recommended that Senate President Ayim Pius Ayim, contest for the office of the presidency and advised that he advances his ambition to the central.

The eastern bloc has been eyeing the number one spot since the second republic, as the region has only produced one president during the parliamentary system in 1969 and one military president in the same decade. The military head of state, General Aguiyi Ironsi who came from the east did not serve more than 6 months before he was killed and was replaced by a military leader from the north-central, General Yakubu Gowon. In the last 55 years, no Igbo leader had assumed the seat of the presidency, as the South West zoning system has continued to favour the Hausa/Fulani, Yoruba and the minority region from the South.

During the civil war between 1966 and 1970, history has it that while the Biafrans were fighting tooth and nail to ensure that they secede from the colossus of Nigeria, another Igbo businessman was supplying ammunition for Nigeria to fight the Biafran soldiers who are also Igbos.

In December 1983, the brass hats and Jackboots toppled the civilian government of Alhaji Shehu Shagari probably to truncate the emergence of Vice President Alex Ekwueme as the presidential candidate of the then ruling NPN after the expiration of Shagari’s second term in office. The military, however, adduced corruption as the main reason for staging the coup.

For Nigeria of today to produce a President from the east, the Igbos of South-East Nigeria must invest in party politics to stand a good chance at the next general election. The major challenge that can mitigate against the ambition is the structure and political orientation of the eastern leaders. They have the problem of leadership.

The Igbos are so endowed that they are spread all over Nigeria and they can gather a lot of votes, but they are too divided. For instance, an Imo person, an Enugu person, an Anambra man will not listen to themselves.

The Igbos are dispersed in every nook and cranny of Nigeria, and have been contributing significantly to the economic and technological advancement of Nigeria. They have the money. If they sit down and aggregate what they can offer, they have more money than almost everybody in Nigeria. But one key factor that the Igbos must consider is the ability to listen to one another and allow for the choice of having a symbolic leader who can converge the power holders beyond their competitive status.

Some of the prominent names that have come up as likely presidential aspirants from the southeast include Peter Obi and Rochas Okorocha, former governors of Anambra and Imo States respectively, and Governor Dave Umahi of Ebonyi State, Ayim Pius Ayim, among others.

In June 2020, Kingsley Moghalu, a former deputy governor of the Central Bank of Nigeria and ex-presidential candidate, officially declared his intention to run for president in 2023.

The two major political parties in the country – the APC and PDP – have also begun moves to organise a national convention in preparation for 2023. While the PDP had one of the most peaceful conventions last October.

Another factor that can mitigate against the east is the number. The number of voters in the whole of 5 states of the East, Abia, Enugu, Anambra, Ebonyi and Imo cannot be equated to the 3 key states of the north alone. This means that for any aspirant to win any elections at the national level, he has to negotiate with the North, and once you are not bringing a powerful electoral base to be central, you can only negotiate for a subordinate post rather than becoming the key person in such negotiation.

This means that presidency of Igbo is a function of the Northern determination rather than self-determination.

Some commentators have also argued that the “Igbo problem” was created by the Igbo themselves – that it is an injury that Igbos inflicted on themselves by staging the first coup d’état in 1966 and then trying to secede from the federation, leading the country to wage war against them.

There are also other controversial analyses that the Igbos are their own worst enemies, although they often claim people from other ethnic groups are antagonising them. Since the end of the civil war, the Igbos have not become politically united.

Their individualistic orientation has often been blamed for this. They will place their interests above the collective good of the Igbo people when issues affecting them crop up. Unlike the indignant Yoruba people who formed NADECO to fight for the re-validation of the late MKO Abiola’s stolen mandate, the Igbo top politicians, who were members of PDP, reportedly sold the late Dr Alex Ekwueme down the river during the PDP’s presidential primary election in the late 1990s. Then, Dr. Ekwueme was in a pole position to clinch the presidential ticket before his ethnic compatriots betrayed him.

It can therefore be said that the absence of responsible selfless and visionary leadership among the Igbo ethnic group must have motivated the emergence of Nnamdi Kanu as the leader of IPOB, a separatist group.

When one also considers the network of key stakeholders within the corridor of power today, it will be noted that there are very few Igbos who are currently within the power space in Abuja except for a few of them within the ministerial cabinet. The Igbos who are in the ruling APC are seen as an outcast and a sell-out, but the Igbos have no reliable or formidable political structure other than APGA which subsists only in one state, the Anambra State.

However, all that the Igbos need is one voice for a start. A united household will fear no intruder because there won’t be one. Once the Igbos get it right to form a united movement, they will naturally appear on the negotiating table to be considered for whatever they clamour for.

Why The IGBO Will Find It Difficult To Be President was last modified: December 29th, 2021 by Seun Emmanuel