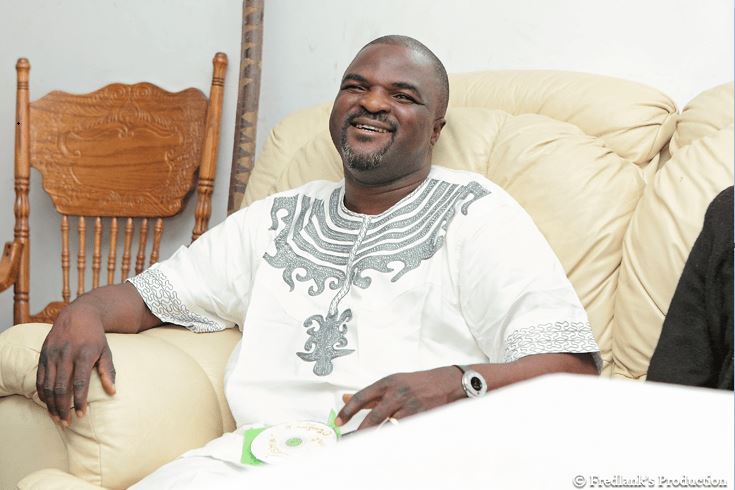 That was the biggest news in the Entertainment sector last week. It was the news of how the Olubadan of Ibadan cancelled the scheduled chieftaincy installation of Fuji star, Obesere as the new Agbaakin Bobagunwa of Ibadanland. But he got a bigger title, the Agbaakin Bobagunwa of Yorubaland from the Olowu of Owu-Kuta, HRM Oba Hammed Adekunle Makama Oyelude. He spoke to City People last week on how shocked he was about the cancellation.

What really happened? What led to the breakdown in communication between Obesere and the Olubadan’s palace? These and many more were the questions City People asked Obesere last week and he explained what transpired between them. When City People first approached him, he was reluctant to talk. “I don’t want to talk about this chieftaincy thing” he explained. “If I say anything now it will be as if I am complaining. I don’t want to join issues with the Olubadan’s palace. I respect my royal father, the Olubadan of Ibadan, I cannot speak ill of him. Ordinarily, I would not have said a word but many people have been calling me to ask and find out what happened. So as not to allow for any controversy I think it is appropriate to say that it was a breakdown in communication between Kabiyeesi’s aides in the palace and myself.

What happened was that several weeks back, I got a letter from the palace of the Olubadan. They wrote to me officially that Kabiyeesi was to honour me with the Agbaakin title, I was happy. The P.A. to Kabiyeesi signed I was told to choose the month and date.

I wrote my Acceptance Letter. I chose the month and date. It was accepted, so I continued with my planning. Suddenly, I got a call weeks after the publicity for the event had become grand. The radio jingle was running all the adverts were running.  For me, the event was planned to be a Big one. I had invited all my friends from London, U.S., Dublin, all over the world to fly in for the event. We had chosen the Aso-Ebi fabric to use, people had started buying the Aso-Ebi. Some of my close friends had taken their annual leave where they work abroad to be in Ibadan for the event. The I.V. was ready. Suddenly, those in the palace told me we would have to change the date. I said haaa! That will be impossible. As at that time, I had paid close to N2 million for the venue which is non-refundable. I had printed I.Vs. We had sold close to 5,000 pieces of Aso-Ebi, all the arrangements were in the top gear. I had paid for the decorator.

So, I explained all these to them at the palace. I begged them to let us still do it on that same date but they refused. I was invited to the Olubadan palace where I met some close associates of the Olubadan and eventually I met Baba. I explained to Baba and again pleaded. But he insisted that he wants the date changed. He said he is not saying he won’t give me the title eventually but he wants that date changed. I again begged. I told him I had paid for the hall. I told him I have paid for decoration all of which is non-refundable.

When it was clear that the event wouldn’t hold on the date fixed, I begged them to let me take the other chieftaincy title offer, that the Olowu of Owu Kuta had also promised me. The offer from the Olubadan was an Ibadan title which I am eminently qualified to take.

But I was also offered a bigger title by the Olowu of Owu-Kuta. So, I spoke to Olowu of Owu-Kuta who is also my friend, brother and royal father. He asked me to come and see him immediately, after listening to my story on the telephone. I reminded him of his promise to honour me and how he also had asked me to come for it whenever I am ready. I told him I am now ready to take the chieftaincy title and that I would like to have it on that date. He said Haa! He looked at me with pity. He said he will give me a bigger title, Agbaakin Bobagunwa of Yorubaland.

He said he would have to talk to Baba Olubadan to hear from him. He called the Olubadan to talk to him. The Olubadan title was Agbaakin Bobagunwa of Ibadanland. His own is Agbaakin Bobagunwa of Yorubaland. They are 2 different titles. He invited 38 other Obas from in and around Osun State to witness the ceremony. It was grand. It was well attended. All those I invited from abroad flew in and they witnessed the event. We now had a big celebration on May 2 in Ibadan.

So, all I can say is that there was really no serious disagreement as such. The only area of disagreement was over a convenient date. So, once they fix an appropriate date I am ready to take the title of Agbaakin Bobagunwa of Ibadanland Chieftaincy title.

The aspect that got me angry a bit was when one of Kabiyeesi Olubadans aides advised me to call a fellow Fuji artiste, who is not an indigene of Ibadan to help me beg the Olubadan. When they told me that I was angry. How can I go and beg someone who is from Ijebu to come to Ibadan and beg my royal father? It’s taboo. I refused to do that. I said lailai I can’t beg this Fuji artiste because he is not from Ibadan. I was born and bred in Ibadan. I am a son of the soil. I have access to the Olubadan. He is my royal father.

He is my Baba. Whenever he calls me, I will be ready to receive the Agbaakin title from him. I respect him so much. I also thank the Olowu of Kuta, for his role. I thank all my fans, friends and family members who trooped out to grace the chieftaincy installation and the Ibadan party.

How to unseat ‘godfathers’ in Lagos – El-Rufai Speaks

TINUBU Holds Meetings Till 4 am Daily...