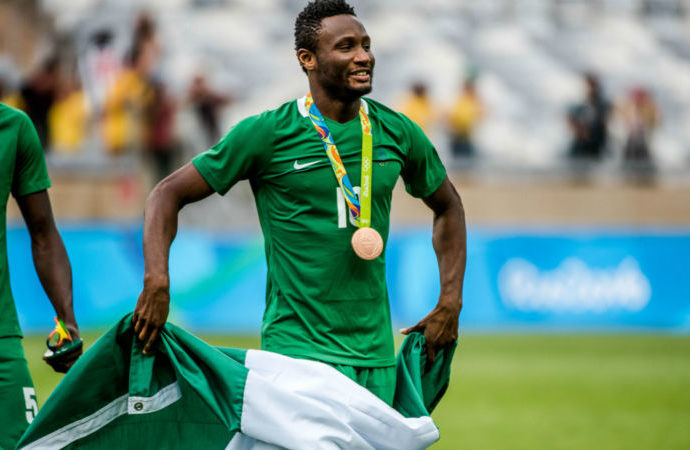 John Obi Mikel is nothing if not optimistic when it comes to Nigeria’s hopes of qualifying for the 2018 FIFA World Cup Russia. Although Africa’s third round of qualifying only reaches its halfway point at the end of this month and beginning of September, the Super Eagles captain believes a place at the global finals is within their grasp.
Group B, in which Nigeria are already four points clear of second-placed Cameroon and five ahead of Zambia and Algeria, certainly makes for pleasant reading. And though four tough games have still to be negotiated, Mikel is upbeat about their prospects of topping the table and claiming the section’s sole spot at Russia 2018.
“We are in a very good position in our group,” the 30-year-old Tianjin Teda midfielder told FIFA.com. “We have two wins from two games, and in our last game, we beat Algeria at home. We have a very good young team and the players play good football. If we can win our next match (at home to Cameroon on 31 August) it will edge us closer to qualification. I think we can go through.”
For the former Chelsea star, the pressure to make it to Russia is immense. And as he explained, that is not simply due to the expectations of supporters in his football-mad homeland. “My wife is Russian,” he said, “and many of our relatives and friends are from Russia. They are all expecting Nigeria to qualify for the next World Cup. I think they will kill me if I fail them,” he added, laughing.
Crunch ties
For all his confidence, Mikel is under no illusions that the remainder of Nigeria’s campaign will be easy. Looming large, after all, are back-to-back meetings with reigning African champions Cameroon, who have drawn both their matches thus far. The Super Eagles captain knows that these meetings on 31 August and 4 September will go a long way towards deciding the group’s outcome.
“As everyone knows, they are a very good team,” he said of Cameroon. “They are strong and they play with confidence. We must get ourselves well prepared for this game and try our best to get on top against them. It won’t be easy but these are important matches. If we win both, we will be almost there.”
As might be expected given his role as captain, Mikel has figured prominently in Nigeria’s qualifying campaign thus far. Notably, he scored one and set up for another in their most recent triumph: a 3-1 win over Algeria in November. However, injury has kept him sidelined over recent months, causing concern for supporters of both club and country. Mikel, though, has vowed to do everything within his power to be fit for this vital upcoming doubleheader.
“I had maintained good form until this injury,” he said. “So it was a shame. But this is part of the game and now I am focusing on recovery and on coming back stronger. I will do whatever I can to get fit to play for Teda and my national team.
“This Nigeria team look up to me for advice. My team-mates miss me and they need me. As the captain, I want to fulfill my role and help them with my experience.”
A distinguished career
Mikel certainly has a pedigree that few of his African peers can match. He broke on to the scene at the 2005 FIFA U-20 World Cup, when he helped Nigeria march all the way to the final, where they were edged out by a Lionel Messi-inspired Argentina.
In the senior ranks, he helped Nigeria to the 2013 African Cup of Nations title and, more recently, starred for the Super Eagles at Brazil 2014, where they reached the second round for the first time since 1998.
At club level, he won just about everything on offer during a glittering 11-year spell with Chelsea, departing Stamford Bridge having claimed a UEFA Champions League title, two English Premier League crowns and four FA Cups. Such achievements, however, merely serve to whet his appetite for more.
“I am glad with what I have done,” he said. “But at the same time, I am not satisfied. I want to achieve more, so I must push harder. The next World Cup in Russia will be a fresh chance for us but, first, we have to make it there. Then the next challenge will be to make sure we enjoy an even better tournament in Russia than we did in Brazil.”
-FIFA
My Wife’s Relatives Will Kill Me If I Miss Next World Cup in Russia – Mikel Obi was last modified: August 3rd, 2017 by Arinze Ago