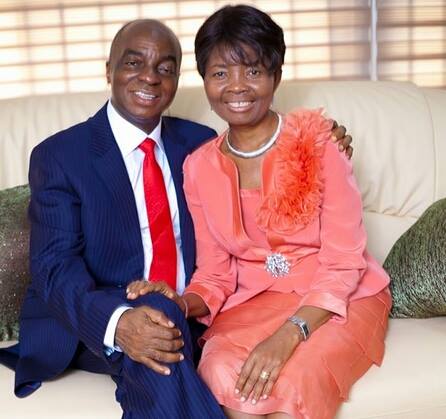 Living Faith Church Worldwide (also known as Winners Chapel) is 40. And the church is celebrating it big. It is an Evangelical charismatic Christian denomination and a mega church with headquarters in Ota, Nigeria. The organization has since become a global network of churches with congregations in 65 countries.

The beginnings of the church manifested on May 2, 1981, when Bishop David Oyedepo (aged 26) had a spiritual encounter while lodging in one of the rooms within ‘International Hotel’ located in the Omi- Asoro Quarters of Ilesa city, in the present day Osun State of Nigeria. He claims to have an eighteen-hour supernatural encounter which was a vision from God. God spoke to him saying, “Now the hour has come to liberate the world from all oppressions of the devil, through the preaching of the Word of faith; and I am sending you to undertake this task”. In 1983, the church began operating with four members on December 11. Worship service at Faith Tabernacle, affiliated to the Living Faith Church Worldwide, in 2005, in Lagos, Nigeria

Canaanland was procured in 1998 and was initially 560 acres (2.3 km2), it is in Ota, Ogun, Nigeria. The church’s international headquarters, Faith Tabernacle, was built in Cannanland between 1998 and 1999, taking twelve months to complete. The foundation laying took place on August 29, 1998.

In 1999, the Faith Tabernacle was inaugurated with 50,400 seats. On Dec 11 2013, Oyedepo’s first son, David Oyedepo Jnr, ministered for the first time at the church’s annual Shiloh gathering.

In December 2015, Oyedepo Jnr became the resident pastor of the Faith Tabernacle. Oyedepo announced the commencement of the construction of a 100,000 capacity Faith Theatre. The Theatre will be centralised within a 15,000 housing estate to be known as ‘Canaan City’.

The Church is founded upon 12 core emphases. The theological position of the church is Pentecostal. There will be Living Faith Church 40th Anniversary LIVE Broadcast, Telecas from (2nd May to 9th May)

There will also be Living Faith Church 40th Anniversary LIVE Broadcast, Telecast from Winners Chapel Canaanland Ora with Bishop David Oyedepo on 2nd May – 9th May.

The live telecast details for the 40th anniversary of Winners Chapel (Living Faith Church Worldwide) will be streamed live from Faith Tabernacle all through their YouTube Channel and Facebook Page with details loading.

The message from the Presiding Bishop reads: You will recall that the mandate God gave me was delivered May 2, 1981, in 18 hours of open vision, saying, “the hour has come to liberate the world from all oppressions of the devil and I am sending you to undertake this task”. To the glory of God, this Commission turns 40 come May 2nd 2021.

To this effect, a week-long program running from May 2nd to 9th has been put in place. Sunday, May 2nd, the exact day that the Mandate turns 40, shall be a special thanksgiving service.

The main sessions of this celebration kick off on Monday, May 3rd and shall run through to May 8th.

Let’s tell you more about Bishop David O. Oyedepo who was born September 27, 1954. He is a Preacher, Christian author, businessman, architect and the founder and presiding Bishop of the megachurch Faith Tabernacle in Ota, Ogun State, Nigeria, and Living Faith Church Worldwide, also known as Winners’ Chapel International.

The Winners’ Chapel International network of churches is located in over 300 cities, in all states of Nigeria, and in several cities in 45 African nations, Dubai, the United Kingdom and the United States. Oyedepo has been seen as one of the pioneers of the Christian charismatic movement in Africa and has been referred to as one of the most powerful preachers in Nigeria. He is the Chancellor of Covenant University and Landmark University. He was named in 2011 by Forbes magazine as being the richest pastor in Nigeria. In 2020, he announced that before the year runs out, God whom he claim told him, will plant 10, 000 churches globally.

By January 1st 2021, it was announced that despite the disturbance caused by Covid-19, the church was able to plant 10, 000 with resident Pastors allocated to each.

On September 27, 1954, David Olaniyi Oyedepo was born in Osogbo, Nigeria, but he is a native of Omu-Aran, Irepodun Local Government Area of Kwara State. He was raised in a mixed religious family. His father, Ibrahim, was a Muslim healer. His mother, Dorcas, was a member of the Holy Order of the Cherubim and Seraphim Movement Church (C&S), a branch of the Aladura movement in Nigeria. He was raised by his grandmother in Osogbo, who introduced him to the virtues of Christian life via early morning prayers which she attended with him. She also taught him the importance of tithing.

Bishop Oyedepo studied Architecture at the Kwara State Polytechnic, Ilorin. He also received a PhD in Human Development from Honolulu University, Hawaii, US.

Bishop Oyedepo worked briefly with the Federal Ministry of Housing in Ilorin before resigning to concentrate on missionary work.

READ ALSO: WHO WILL SAVE FIRST BANK FROM THE WARRING FACTIONS?

Who Will Save First Bank From The Warring Factions?