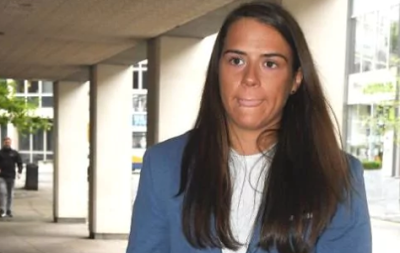 A woman who used a plastic penis to dupe her girlfriend into believing she as actually a man has been jailed as the judge told her “sometimes truth is stranger than fiction”. Gayle Newland cried in the dock as she was sent back to jail yesterday for tricking the woman into believing she was a man by making her wear a blindfold when they met and by using a prosthetic penis during sex.

The 27-year-old created a “disturbingly complex” online persona to achieve her own “bizarre sexual satisfaction” and continued the deception over a two year period.

The Recorder of Manchester, Judge David Stockdale QC, told her she had shown “an extraordinary degree of cunning and a chilling desire” to manipulate and control the lives of others. “It is difficult to conceive of a deceit so degrading or a deceit so damaging to the victim on its discovery,” he added.

“In her own words, she said the ‘nightmares still remain, the distrust remains and the fear still remains’.”

Newland has been jailed again following a retrial at Manchester Crown Court after a jury convicted her of committing sexual assault by using a prosthetic penis without her victim’s consent.

Her victim, who cannot be named for legal reasons, says she feels she is trapped in a “prison” after what Newland did to her.

“She has created a prison for the joyful persona I once had,” she said.

“I can only hope I can move on fully and not do the time with her.” She created a fictional Facebook profile, pretending to be a half-Filipino half-Latino man called Kye Fortune, using an American man’s photographs and videos.

Newland had told her victim, also in her 20s, to wear a blindfold at all times when they met at the complainant’s flat.

The complainant agreed to demands for her to wear a blindfold at all times during up to 15 sexual encounters and while watching television, going on a car journey and even sunbathing.

Newland denied concealing her true identity and claimed both women were gay and struggling with their sexuality when they met and had sex, with her as Kye, during role-play.

The complainant said she was persuaded by the defendant to wear a blindfold at all times when they met and only found out she was having sex with Newland when she finally took off her mask.

Newland, of Willaston, Cheshire, had been jailed for eight years in November 2015 after she was convicted of the same offences by another jury at Chester Crown Court.

But the conviction was quashed in the Court of Appeal last December and a retrial was ordered after it was ruled that the trial judge’s summing up of the case was not fair and balanced.

Prosecutor Simon Medland QC told the jury: “This manipulative, deceitful and very crafty young woman went to such astonishing lengths to control the complainant’s life and make her do the things the defendant wanted her to do.”

Newland was found guilty of three counts of sexual assault and cleared of a fourth count.

She was also jailed for defrauding her employer of £9,000 by creating fictional accounts.

Woman Tricks Friend Into S*x By Pretending To Be A Man Using Fake P*nis was last modified: July 21st, 2017 by Reporter

Tsunami: Over 1000 PDP Members, Others Defect To APC In Delta