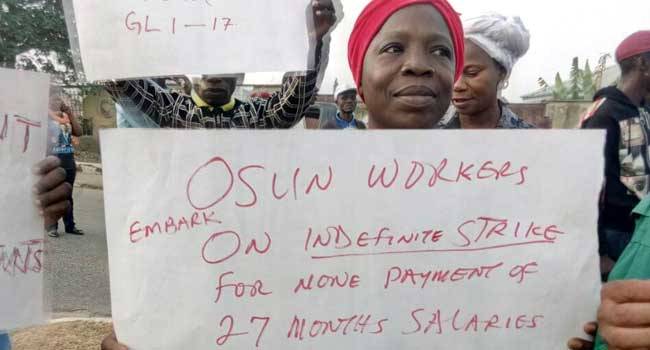 The Osun Government workers, on Wednesday, stayed away from the state secretariat, Abere, Osogbo, in compliance with the directive of the Joint Labour Unions to embark on a three-day warning strike.

All the offices at the state secretariat were under lock and key, as no worker was seen in the premises, except the security personnel.

The same scenario played out at the Olorunda and Osogbo Local Government Secretariats, both in Osogbo.

The statement directed all civil servants in the state to embark on a three-day warning strike to demand the payment of their salary arrears and other entitlements.

The unions in the statement, are asking the state government the payment of 34 months’ salary arrears of 50 percent for officers on Grade Level 08 and above, equaling 17 months full salary.

Also, the workers are demanding payment of the 2016 leave allowances across board to officers of the state government.

In his reaction, Mr. Adelani Baderinwa, the Osun Commissioner of Information and Strategy, said a meeting was being arranged with the workers to resolve the issues raised.

“We always find a way of resolving whatever differences that we have with the workers in the state and I assure you that this is not going to be an exception.

“The issues raised are issues that are always being addressed since, even without anybody asking for it, I am sure we are going to find a way of resolving the issues,” he said.

YOU ARE SOME OF THE BEST – Mrs. Ambode tells LASU students