Home Education Why I Wrote My Book, There Are No Heroes – Ace Broadcaster, FEMI SOWOOLU
EducationNews

Why I Wrote My Book, There Are No Heroes – Ace Broadcaster, FEMI SOWOOLU 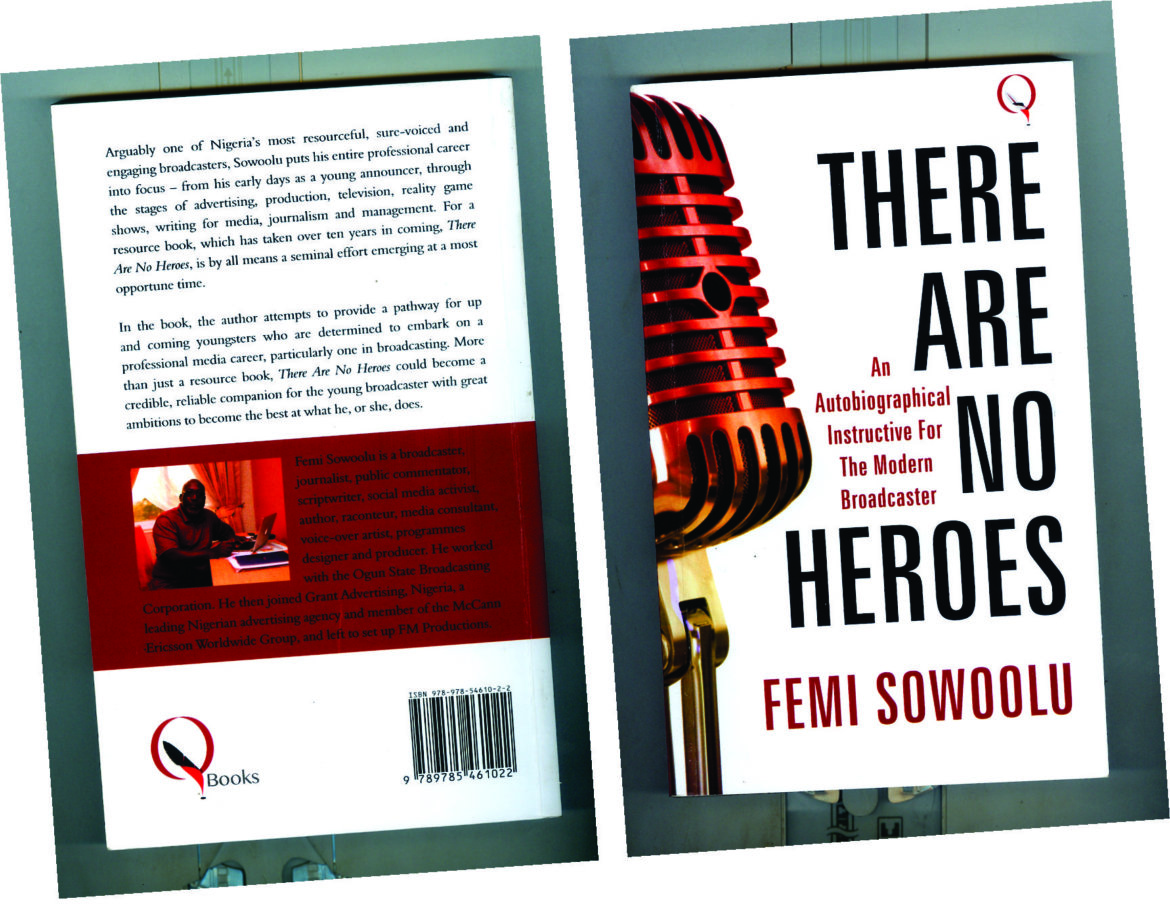 Be the first to know that ace broadcaster, Femi Sowoolu has just written a book every broadcaster should read and own. Its called There are no Heroes. It is an autobiographical account of how to be the best in broadcasting.  Why do you want to be a broadcaster? he asked the reader of the book. That is often the  first question I ask students of Presentation at many broadcast lectures. The answer each student gives determines, largely, whether the student will have a successful broadcasting career. Most new entrants get into the field for all the wrong reasons: I want to be famous, I want to be a star, and I want to be like the ftmale newscasters on TV.

Out of every ten to fifteen newcomers, perhaps only one will tell you that he or she joined broadcasting because they admire the profession and is willing to learn and participate in every aspect of it. It sounds ‘old school’ perhaps, from today’s perspective, but the rules of this game have remained unchanged since the days of the pioneers. There are no shortcuts, there are no half measures, and there is no slackness. To succeed in broadcasting, interest and attentiveness is supreme. However, these are mere basic beginnings.

As you progress, thoughts of the profession should energise you into improved awareness and attentiveness. When you sleep at night, you should dream of broadcasting. The top announcers, presenters and newscasters are your role models. You must continually perfect your art, consistently hone your skills, and diligently improve your talent, until you achieve success. However, I should warn you, the best announcers, presenters, narrators, newsreaders or disc jockeys are still learning the art of perfection. It is a lifelong effort. If you are not willing to make the sacrifice, go the extra mile, seek the extra requirements, then maybe you should just give up right now. Go on. Close the book. Bye, I am sorry to have bothered you.

However, if you do intend to reach the very top, to excel in the field of broadcast communication, welcome, my friend. Let me tell you how I and quite a few others have achieved our success: by using practical examples as guide through various stages and different departments of presentation; replaying many parts of my professional experience, and often recanting personal highlights to explain the hundred percent that success demands in this amazing field of endeavour.

The writing style chosen may appear strange: is it bio- graphical, instructive, or educative? We do not really have to explain style; but actually, it is a bit of all. This book is designed to provide biographical, spiritual, and motivational direction, as well as educational value to the upcoming broadcaster. There are also many pages of comic relief, and why not? You see, our profession has its own set of rules. The broadcaster’s life is a mix of emotions. There are no hard or fast rules in media, entertainment, or showbiz, and radio and television are showbiz. You depend on the basic creative skills you bring to the trade and your perfection of those talents. It is a continuous learning process; most of the lessons are picked up along the way. The easy part is going to college and getting a certificate. The chal- lenge is rising to the occasion when the chips are down, when you have to prove that all that glitters is gold! Broadcasting is an art, but there is also a scientific route towards success.

I have chosen the title There Are No Heroes, because the true broadcast professional prefers to remain unsung; that is what we are. The best broadcasters make the most impact by their invisibility-you can hear them only in the box, or see them only on the tube. It is like quiet fire, or a silent storm! Most astute broadcasters prefer that their personal lives remain private, and are rarely seen outside the studio environment, although the trend is being violated more often in these days of kobo-kobo publicity. Unfortunately, our exclusive club has been opened for all-comers, who seek cheap publicity stunts at every opportunity.Recall: “I want to become famous!”

This book is meant to help young people who have an honest interest in radio and television performance as artistes or presenters. In a subtle way, it is also the story of my relationship with the microphone. The idea is to create an instructional material that is also inspirational, motivational, educative, and entertaining. Is that not what broadcasters are supposed to do? Broadcast acolytes will also find it rather valuable, revealing many of the hard-learned lessons and some of the unwritten secret pathways and codes I discovered along the way.

Growing up as a young broadcaster in the 1970s, I often found it extremely difficult, or almost impossible to get professional assistance from the seniors in the profession. Most were tight-lipped and rather miserly with advice. I remember often wondering why they were so scared of sharing knowledge. I learnt my skills the tough way. I was largely self-taught, but I did employ the examples of many heroes and role models who assisted me with their own presentation styles. Far back then, I decided, that someday I would write a professional tome of some sort, to guide younger entrants in broadcast. I have decided to employ this unique format to write this book-a little in-between an historical narrative and a novel, to avoid making it read too academic. It is not my intention to have my personal or professional life studied and analysed in the stymied halls of academic discourse. Please regard this as a basic ‘how-to’ book on finding your way through the complex maze of the broadcast environment.

He worked with the Ogun State Broadcasting Corporation. He then joined Grant Advertising, Nigeria, a leading Nigerian advertising agency and member of the McCann Ericsson Worldwide Group, and left to set up FM Productions. 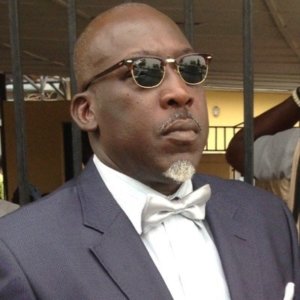 Submitting again to the lure of the radio environment he joined Rhythm 93.7 upon inception, guiding the station to an enviable number one position on the ratings. In the years since, he has been Director of Radio Services at Radio Continental, the radio arm of Continental Broadcasting Services, also employing his clout and experience to bring the station to leading position in the Nigerian broadcast environment. He was

Femi has consulted for City 105.l FM, Lagos, Space FM, Ibadan and Wave FM, Port Harcourt (formerly radio PHFM), which he guided through a process of successful rebranding to prominence, and is also currently involved in setting up a number of other radio stations across Nigeria.

Femi also served as Chairman, Media and Publicity Committee of the Senator Ibikunle Amosun Campaign Organisation in the months leading up to the 2015 Ogun State Gubernatorial election. He is currently the Managing Director and Chief Executive Officer at JAMZ100.1FM, based in the city of Ibadan, Oyo State.

To many he has guided, Femi is regarded as the ideal example of leadership excellence.

Every Broadcaster In  Nigeria Must Get This Book!!!

Femi Sowoolu is a big name in Radio Broadcasting . He has been in Radio since 1977. He was one of the early presenters at OGBC in those good old days and he has gone on to work with practically all the topnotch radio stations. He is one of the very best in the business. He is the guy behind the new radio station rocking Ibadan airwaves called Jamz 100.1 FM.

Apart from the new radio station that is just 4 months old, this ace broadcaster has just published a book titled There Are No Heroes. In the book, he attempts to provide a pathway for up and coming youngsters who are determined to embark on a professional media career, particularly one in broadcasting. More than just a resource book, There Are No Heroes is a credible, reliable companion for the young broadcaster with great ambitions to become the best at what he, or she does.

Arguably one of Nigeria’s most resourceful, sure-voiced and engaging broadcasters, Sowoolu puts his entire professional career into focus-from his early days as a young announcer, through the stages of advertising, production, television, reality game shows, writing for the media, journalism and management.

For a resource book, which has taken over 10 years in coming, There Are No Heroes, is by all means a seminal effort emerging at a most opportuned time.

Why I Wrote My Book, There Are No Heroes – Ace Broadcaster, FEMI SOWOOLU was last modified: March 19th, 2017 by Seye Kehinde