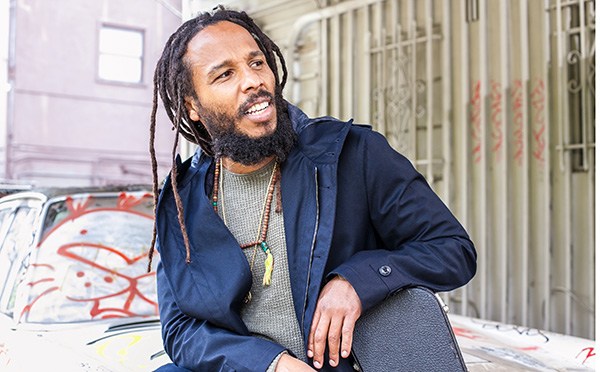 June will be a busy month for Ziggy Marley. The Grammy-winning artist and eldest son of reggae legend Bob Marley will celebrate the 40th anniversary of Bob Marley & the Wailers’ iconic Exodus album with the June 2 release of Exodus 40 – The Movement Continues. Then Ziggy will hit the road again for the duration of his summer tour, starting June 12.

But preceding all that, Ziggy dropped by the Roxy Theatre in Los Angeles this week (May 22) to formally introduce One Love — that’s the name of the newest ice cream flavor created by Ben & Jerry’s in partnership with the Marley family. A portion of the proceeds from each pint sold will benefit Jamaica’s One Love Youth Camp, a program operated by the Bob Marley Foundation and Partners for Youth Empowerment.

This is actually the second time the Marley family and Ben & Jerry’s have partnered. A year ago, the partnership launched One Love in the U.K. and Europe. The resulting success prompted the decision to bring the flavor — banana ice cream with caramel and graham cracker swirls and chocolatey peace signs — Stateside.

“The combination of music and ice cream is a nice way to talk about issues with people and get them to open up their hearts and minds,” says Ben & Jerry’s co-founder Jerry Greenfield, who co-hosted the Roxy launch party. “We’re also celebrating the values and vision of Bob Marley and his music: peace, love and social justice. In the wake of Manchester, now more than ever we need to find additional ways to unite people and build a better world.”

“Partnering again with Ben & Jerry’s to use ice cream to represent the idea of one love — blending well together — gives us another platform to spread that message,” adds Ziggy.

The kickoff party at the Roxy was immediately followed by the first official listening party for the upcoming Exodus 40 — The Movement Continues. The reimagined version of Marley’s classic 1977 album Exodus was curated and produced by Ziggy, who calls the finished project a “restatement.” Delving into original session recordings, he incorporated unused and never-before-heard vocals, lyric phrasing and instrumentation. In the case of the track “One Love,” for instance, Ziggy discovered 10 lead vocal outtakes that he pieced together to create a new lead vocal.

“My father and the band were very adventurous, very rebellious in their musical expression,” Ziggy says of revisiting the session recordings. “I heard stuff that I didn’t expect to hear within the so-called genre of reggae that kind of blew my mind.”

The Exodus 40 rollout on June 2 via the Marley family, Island Records and Universal Music Enterprises (UMe) will feature a two-CD package (the original Exodus and Ziggy’s Exodus 40) and a three-CD set/digital equivalent (original album, the “restatement” album and Exodus Live). Also available: a limited-edition gold vinyl version of the original album. Coming June 30 is a super deluxe four-album package plus two 7-inch singles. Additional information about the aforementioned packages is available at BobMarley.com.

Ziggy’s summer tour encompassing headline shows and festivals across North America and the U.K. began April 22 in Miami. The tour picks back up again on June 12 at San Diego’s Humphreys Concerts by the Bay and includes his fourth headline appearance at Los Angeles’ Hollywood Bowl on June 18 — also his first time performing with an orchestra. Find all his tour dates here.

Wizkid And Jidenna To Perform At Coachella...