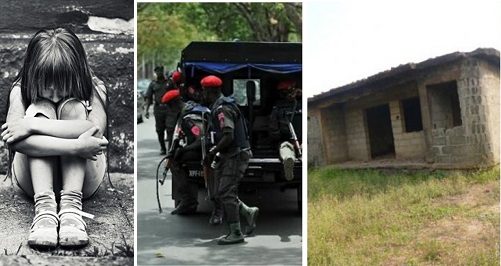 A 10-year-old girl who hawks sachet water was caught having intercourse with 4-men in an uncompleted building at Kwata, Suleja.

After being caught, she revealed that the men pay her between N100 and N200 after having intimacy with her daily and return home at 10 pm.

In a chat she had with Security Operatives, she said that she started having sex since she was eight years old.

“I started sleeping with men when I was eight years old. I use the money they give me and the one I get from my pure water business to sustain my parents and two siblings,”

“I don’t sleep outside my home,”

Although the men she was caught with refused to give their identities;

“and as a matter of fact, the little girl chose to engage herself into such act.

“She was not forced as we thought when we arrested them. It was dur­ing interrogation that it became clear to us that they had her based on her agreement with the four men.”

10-year-old girl Engages In Prostitution, caught with 4 men was last modified: May 30th, 2017 by Arinze Ago